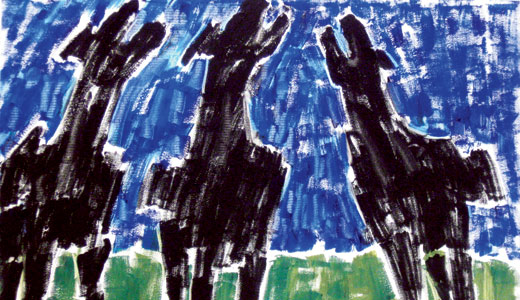 The Wild and Woolly Film Series at the Clifton Center returns with an evening of Laurel and Hardy films. The triple feature opens with “Big Business,” a 1929 silent short that lays out the basic Stan & Ollie template and was deemed a National Treasure in 1992 by the Library of Congress. In it, the duo play door-to-door Christmas tree salesmen, but, as far as their would-be customer is concerned (James Finlayson, a repeat foil for the tandem), the peddling pair’s main commodity is mayhem. There is more X-mas-run-amok with “Babes in Toyland.” A December 1934 review in The New York Times predicted that this “photo play” was destined to cause a “vast whooping and stamping of feet” during the approaching holiday season. We’ll see if that holds true today. The mini-fest’s capper is the 65-minute “Way Out West,” which reunites Finlayson with Hollywood’s best-known blockheads as he tries to seize the deed to a goldmine that Stan & Ollie are holding. —J. Christian Walsh

New Clifton Center executive director John Harris and his wife, Natalie, executive director of Coalition for the Homeless, have teamed up professionally to organize this benefit jam. Many local business owners, chefs, poets and musicians have agreed to donate their time and services to help curb homelessness in our community. Funds raised will go to the coalition’s “Rx: Housing” project, which is working toward obtaining housing vouchers for 75 of our most vulnerable neighbors. While housing has been secured, the rental deposits have not. Almost $50,000 is needed to reach that goal. Music performances include Hog Operation, Justin Lewis, Nathan Salsburg, John Gage, Leigh Ann Yost and more, and soups and stews will be provided by top-shelf restaurants such as Bourbons Bistro, Varanese and Majid’s. —Peter Berkowitz

Sure, you can also see Big Hang on Friday night at ZaZoo’s, pairing the self-described “premiere Elvis Presley tribute band” with Johnny C“ash”er (aka Johnny Asher, a Johnny Cash tribute act). But a night with the faux-King local super group and their early rock kindred spirits, The Ladybirds, is a special kind of fun. Yes, Friday night’s better for a dinner of peanut butter, banana and bacon sandwiches followed by hip-shaking dance floor moves, but you’d have to be mighty thick to miss out on this inspired coupling. Big Hang brings together members of Adventure, Bad Blood and Six White Horses, rockers who favor early ’70s Elvis. Word on the street is that the night might also feature a performance by a “dirty” Buck Owens tribute band, Suck Blowens & the Fuckaroos. So put that in your hee-haw. —Peter Berkowitz

If your holiday season has been too nice, if it needs a little heresy or hardy insults to make it all feel festive, then The Bard’s Town and the “Young, Dumb, and Full of Comedy” crew have a very special performance you can’t miss. That’s right, folks, they’re having a “Roast of Jesus.” The show will feature many comics who regularly perform on the Young, Dumb, and Full of Comedy stage: comedians like Will Hardesty, Raanan Hershberg, Lindsay Boling and “Connoisseur of Crass” Mike Chandler. Jesus will be there while a dais comprised of his closest friends insult one another the way only truly holy folks can. And I have no doubt that when the lights go up, everyone in attendance just might want to go find some churchin’. —Brent Owen

What is it about quarterbacks and U of L? Latest in a long line of superlative Louisville passers is freshman sensation Teddy Bridgewater, who has been named to several freshman All-American teams after stepping into the Cards’ starting lineup to beat Kentucky and lead Louisville (7-5) to five wins in its last six games — and a bid to the Belk Bowl in Charlotte, N.C. Bowl opponent North Carolina State led the nation in interceptions and will enjoy a strong home-state crowd advantage for the game, which is expected to produce a near-capacity attendance of 73,000. But don’t count U of L fans out of any chance to embark on a road trip. The red-and-black brigade roared the loudest and stayed the longest as the Cards rallied for a bowl victory over Southern Mississippi last season in Tampa, and will surely be on the road in large numbers again for this one. And for those homebound for the bowl, there’s always ESPN. —Bill Doolittle

I heard my first carol this year the day after Halloween and spotted my first decorated tree on Thanksgiving. Now that Christmas is finally upon us, I don’t think I can handle one more Lexus-with-a-big-red-bow-on-it commercial. (And really, what kind of spoiled brat gets a luxury car for Christmas, anyways?) For those looking to celebrate something other than this holy day of consumerism, there’s Kwanzaa, a seven-day harvest festival that begins Dec. 26.

Founded in 1966 by an African Studies professor in California, Kwanzaa is a non-religious celebration of family, community and culture. On Dec. 28, the Office of Multicultural Ministry at the Archdiocese of Louisville (apparently also sick of Christmas) is hosting a Kwanzaa event that will include African music, readings, food and more. —Sarah Kelley

For all you procrastinators out there — and for anyone like me who avoids St. Matthews during the month of December — it’s not time to panic … yet. You can still get great gifts without standing in line for an hour. Check out Liberty Tattoo and Art Parlor’s “Under $50 Art Sale,” which continues till the end of the month. As art gets bought, more art goes up on the wall. More than 30 artists are participating, and works include paintings, assemblage, pottery, sculpture, glasswork, screen-printing and more. You never know what you might find — for instance, check out Corie Cole’s “St. Reagan” ornament pictured above. Awesome. —Sara Havens

‘As Above, So Below’

The mystical words of “as above, so below” is a phrase simplifying the microcosm and its counterpart, the macrocosm. It’s not us against the world but the opposite; we are connected to the larger universe. Life 101 — understand yourself and you will begin to understand others and the things around you. It’s a statement readymade for a two-person exhibition, with Shawna Khalily and Monique Motiff up to the task. Prints by Khalily carved from wood represent the macrocosm, with dioramas and paintings by Motiff focusing on the microcosmic. “Making pictures for me is the best way I know to live through the most human questions,” Khalily says, “the intensity, the curiosity and confusion and amazement about the essence of hearts, and of purely being.” —Jo Anne Triplett

The late Anne Cooper Dobbins, a native of Louisville, was heavily influenced by a figurative approach to art — an approach common to her mentor and longtime friend Stephen Pace. The two artists will once again be joined in art as U of L’s Hite Art Institute presents “2 Generations.” The two met while Dobbins was at the Washington University of Fine Arts. Dobbins studied under Pace, as he was known for his notable involvement with the New York Abstract Expressionist movement. The strong bond between Dobbins and Pace led to a lifelong friendship, which is realized in this exhibit. Both artists’ work graced the walls of the Metropolitan Museum of Art, The Library of Congress, the Pennsylvania Academy of Fine Arts, and the Whitney Museum of American Art, among many others. A reception will be held during the First Friday Trolley Hop on Jan. 6. —Allison Ray

One must be passionate to paint outdoors in the (insert weather conditions here). I’m like Goldilocks in the house of the three bears — it can’t be too hot, too cold, but just right. That’s why I appreciate the hearty folks who list plein air painter as their job description. “I want them to be recognized as the great plein air artists they are, to share their magic with the public,” says gallery owner Jane Morgan of the participants in this exhibition. “They are a compatible group of artists, very enthusiastic, hard working, paint with emotion … (with) great drawing skills, great color and strong contrasts.” The new works are by Katie Burke, Penny Diamond, Suzanne Dougherty, Gwenn Knight, Rita Neblett, Glenna Pfieffer, Robert Purol, Pam Stockard, Valtcho Tonov and Morgan. —Jo Anne Triplett