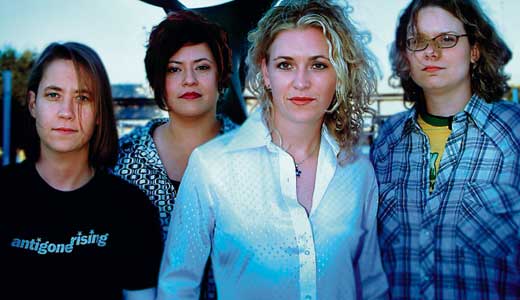 Do you love politely charming music but hate mountaintop removal? Regional music favs Jim James, Ben Sollee, Daniel Martin Moore and Moore’s newest Ol Kentuck Records signing, skilled pianist Daniel Joseph Dorff, join authors Silas House and Jason Howard in trying to get your money put toward Kentuckians for the Commonwealth. The now-30-year-old statewide, non-partisan, member-run social justice organization works toward building “new economic power for coal mining communities by promoting a transition to new and clean energy jobs,” as well as throwing killer parties. Moore says, “I support and love KFTC because they do the work of good neighbors and good citizens … KFTC is a beacon of light.” They list their priorities as Appalachian Transition, Energy Reform, Restoration of Voting Rights for Former Felons, and Tax Reform, so if you’re ready to switch over from a Tea Party to a Patchouli Party, this is your night. —Peter Berkowitz

‘Before the World Ends’

The Alley Theater @ The Pointe

All right, it’s less than a year until we find out if the Mayans really foresaw the end of the world or if they just got bored with calendar making. Between Hollywood and plays like this one opening at the Alley Theater, I’m sure we’ll be totally prepared for every possible scenario, should we see the apocalypse later this year (or whenever). In Larry Larson and Levi Lee’s “Some Things You Need to Know Before the World Ends (A Final Evening With The Illuminati),” a comedy that premiered at the 1986 Humana Festival, we meet the Rev. Eddie as he prepares for his final sermon, “Life is Like a Basketball Game.” The play should answer questions we might have, like, “Are the Illuminati coming for us?” “Is life just a one-on-one basketball game with death?” “Is that bastard cheating?” “Will the Virgin Mary arrive in a flying saucer?” —Jane Mattingly

In a recent interview with the blog Never Nervous, Noise Pollution Records co-owner Nathan Smallwood explained the label’s POV thusly: “We put out bands that we think kind of have their own thing going on. Most of the time they sound nothing like each other, and that’s exactly how we like it. Still, in my crazy brain, there is a common thread among them. They all sort of coexist within the same musical community. I mean, how can Brett Ralph and The Web play a show together? I don’t know either, but it’s happening.” Indeed, and it’s happening on Friday night at the Bard’s Town, experimenting with an evening of loud and/or quiet and/or weird rock (and/or other) as The Web, Brett Ralph’s Kentucky Chrome Review and David Grubbs return, and Straight A’s and Rude Weirdo bring the heat. —Peter Berkowitz

Tink’s is closing its doors after 10 years and, in a bittersweet celebration, their last blast is New Year’s Eve night with the Blue Umbrellas. As Louisville’s only lesbian bar, Tink’s, for better or worse, has welcomed everyone through its doors — from those looking for a safe place to find companionship to those looking for $3 pitchers and karaoke. Saturday’s party will feature a champagne and chocolate fountain (two separate things, of course), party favors, drink specials and lots of ladies who’ll be swapping their favorite Tink’s memories. You can’t get any closer to fine than this. Flannel optional. —Sara Havens

Tired of the same old thing every New Year’s Eve? You wait two and a half hours for a fine dinner at Cheesecake Factory, then drive on drunk-infested roads to get to a bar that charges you $20 to stand in one place and listen to cover songs. And at midnight, they give you a stupid-looking hat and a lute of cheap champagne for your trouble. The Blue Moon Circus may have just the thing for you — the Circus will present “The End is Near! Medicine Show” Saturday at the Rudyard Kipling, complete with burlesque shows, snake belly dancers, aerial acts, comedy, juggling, fire (!), live music and more, not to mention good Rud food, spirits and even fortune telling. The show is dedicated to embracing and celebrating differences and change, which is exactly what a New Year celebration should be, right? You can get tickets in advance at showclix.com/event/204958. —Kevin Gibson

An annual event for many years now, this tribute to one of the greatest songwriters in recorded history returns to the Monkey Wrench for another go-’round. This year, some of the seemingly endless list of performers lining up to play some of the most beautiful songs on Planet Earth includes Bill Ede, Mick Sullivan, Shadwick Wilde, Butch Rice, Mickey Clark, Alanna Fugate, Scott Mertz, Laura Ellis, Tyrone Cotton, Justin Lewis, Heidi Howe, Sean Hopkins and Nate Thumas. A screening of the invaluable documentary “Heartworn Highways,” which features Van Zandt, Guy Clark, Rodney Crowell and Steve Earle (who named his son, singer Justin Townes Earle, after his outlaw poet mentor) precedes the concert at 6:30. The live show begins at 8 and is scheduled to run until midnight … or 2 a.m. —Peter Berkowitz

‘Visions of Lewis and Clark’

I like it when two seemingly different ideas come together, although I still can’t wrap my head around Trader Joe’s chocolate-covered potato chips. I wouldn’t have put “Lewis and Clark” and “kites” in the same sentence, let alone make an exhibition based on the concept, but it works. Curator Terry Zee Lee asked artists to design kites based on Lewis and Clark’s expedition journals. The 25-plus kites are now the first theme-based kite collection. “I am continually amazed at how kites can be used as an art medium, reflecting not only color, shape and design, but also interpreting history,” she says. “They can be taken outside into their natural element and flown, and they take on a radiance that only appears when they are flying high in the sky.” —Jo Anne Triplett

After telling people he works in leather, artist Steven Hughes of Pillywiggins Leather Etc. has gotten some interesting responses, such as, “I don’t go to websites like that.” It must be the masks and belts that make people suspicious. Artistic leatherworking’s heritage is more grounded in European and American history than in anything smutty. “Leather in Kentucky” shows some of that history in the featured saddles and hats, but over the years, leather artists have also used their skill to handcraft jewelry, baskets and purses. Braided leather, inspired by Argentinean cowboys as well as sailor’s knots, is also on display. Artists include Sue Schofield of Inherited Leather, Robert Black of Marlinspike Knot Works, Janet Strait of Swash-Bucklers, gallery owner Craig Kaviar and Hughes. —Jo Anne Triplett