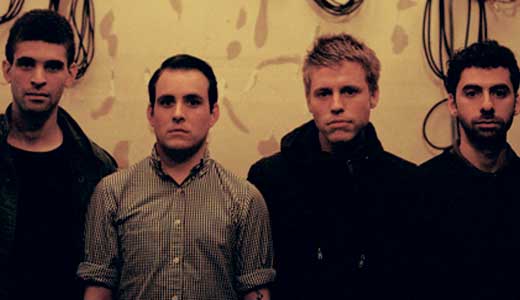 The founders of the sextet White Rabbits moved from Columbia, Mo., to Brooklyn in 2005, inspired by Ska and its New Wave descendants. Since then, they’ve expanded their sound and found mentors in the popular Austin-based Spoon, whose leader, Britt Daniel, has produced for them. The third White Rabbits album will be released early next year.

“We spent the summer in Austin. We were there for three months, from April through the Fourth of July,” says singer/pianist Stephen Patterson. “It was the longest continuous stretch we’ve ever had to be able to record a record.”

Like most young bands, White Rabbits have had to patiently pay their dues. Though their indie pop/rock is undeniably catchy, they haven’t had a hit song yet for radio or car commercials.

“Out first record (2007’s Fort Nightly) was done by sneaking into a studio every weekend, or whenever we could,” Patterson says. “The second record (2009’s It’s Frightening) was done over the course of four weeks, in two two-week sessions. It was really fast. So it was nice this time to stretch out and have time to experiment with stuff, try different arrangements, go through wilder sounds than we’re used to.”

Patterson clarified that their new songs aren’t wildly different, but involve a new way of writing for the band. While some of the new material came out of playing together live, others came from recycling aspects of those performances. “We got into the idea of sampling ourselves. I would record the band, or just a few of us, playing in our rehearsal space in Brooklyn, and find a little moment that sounded cool and use that as the basis for a song, (a sound) that would go through the majority of the song as the main building block.

“We knew that we wanted to apply the rhythm stuff in a new way. That was one thing we were aspiring to do — instead of doing a straight drum sound, putting a little something or other on top of the drums, giving some special quality to that part or arrangement … I grew up playing drums, so I love working on those parts with those guys, and it’s still a big factor in the music we make.”

Patterson concurs, “I think that’s great for the most part — drums are cool, they’re a pretty timeless instrument. But I feel like there are many other ways this concept could be applied than the ways I’ve been seeing it lately. It’s not just simply about power; it’s also about all the different textures it can get.”

The members of White Rabbits have found inspiration in the Ethiopian music series Ethiopiques, as well as “a lot of R&B and a lot of hip-hop.” Patterson says the band also draws inspiration from “a lot of Afrobeat stuff. We really learned to play as a band touring through the last record, so on this one we got really into getting a locomotive kind of rhythm going and trying to keep it continuous throughout the track.”

You learned to play as a band on your second record?

“Yeah, I would say so. Repetition — you do it enough (laughs) and you start to figure out what we can do, between the six of us, that sounds cool. We stopped trying so hard to replicate the album live. That forced us to only be listening to each other in the room, at the moment. That’s a very obvious sort of thing, but a lot of times those very obvious things can take a while to totally sink in. The main thing is, you just tour for a long time and … we toured for long time on our first record, and our second — for two years off of that one — and we’re starting to figure it out.”