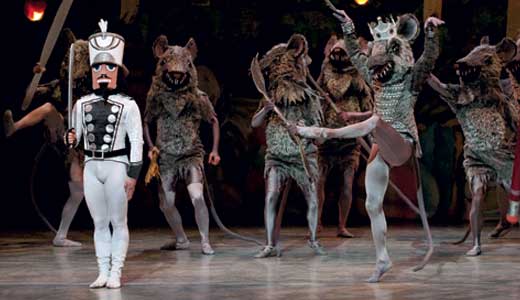 My first job out of college came when I joined the Louisville Ballet as a trainee in 2008. I think back on that time as “living the dream” — 2008 was also the final year the Louisville Ballet produced the version of “The Nutcracker” with choreography by Alun Jones. I recall feeling so excited sitting in the studio with the rest of the company as Bruce Simpson, the artistic director, showed us sketches of the brand new costumes and set designs by Peter Cazalet for the new rendition. By 2009, I was dancing elsewhere and was unable to return to see the new version of the Louisville Ballet’s “The Nutcracker” — until now. So here I am again, two years later, traveling to see this serious artistic treat.

This is an excellent production on many levels. The design aspect is almost a show in itself and is unlike any other “Nutcracker” I’ve seen. The snow scene set includes a glittering fountain while the Kingdom of the Sweets features tall glowing columns and a dark ceiling speckled with bright white lights like stars in a night sky. The party scene shows the women clad in pastel dresses and the men in gray military costumes reminiscent of the Old South. A Kentucky touch comes from the new character of Madam Derby and her jockeys. Just as new sets, costumes and characters breathe fresh life into the show, new choreography from the renowned Val Caniparoli brings the ballet into the modern era with a lightness and quickness that displays the virtuosic quality of these incredible performers.

Especially remarkable performances came from Kateryna Sellers and Evgeni Dokoukine as the lead Arabian couple, a variation made even more dazzling with a levitation illusion designed brilliantly by Marshall Magoon. Another standout was Natalia Ashikhmina as the Rose. She was both bright in leaps and exceptionally quick turns and radiant with suspended balances and a gracious carriage of the arms. Also impressive was the corps of snowflakes. This is the most technically challenging version of the snow scene I have seen, and the attention to detail in the execution was staggering. Each dancer was uniformly as sharp and clean as crystal and selectively still as an icicle. Against such talented professionals, the students of the Louisville Ballet School looked well trained and rehearsed, adding youthful charm and playfulness.

It was a delight to see the Sugar Plum Fairy, a much-coveted role, danced by Rachel Cahayla-Wynne, who was an apprentice in 2008. She was both delicate and articulate in carrying out this lead role. Special mention must be given to the end of her solo when she dazzled with a lightning fast circle of turns around the stage, ending with a perfect pose.

“The Nutcracker” is really about the wonder of magic, imagination and dreams. This sums up how I felt “living the dream” with the Louisville Ballet. And when it comes to their production of “The Nutcracker,” what a holiday gift it is.