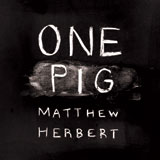 Yoko should be proud, if a little disgusted. One Pig is an album made up of sounds in the life of its titular character. Like us, the animal is born, fed and fattened, then killed. Unlike us, the pig is then taken apart and used for various purposes, not the least important being bacon, chops and maws. We get to hear it all here, from oinks to Ned Beatty-esque squeals to the sizzle of the skillet to the sound of humans chewing. They’re unsettling sounds for any audience, especially so to one who hasn’t dined on the swine in years. Most of the songs evolve into music of a sort made via the pig’s parts and fluids, with the guttural tones advancing like Jarrett’s humming or Seles’ grunts. As an art piece, it’s an interesting concept, and it’s easy to see its value, conversationally. However, these aren’t the sounds one should subject yourself to via headphones. If you aren’t already in the choir, having absorbed the lessons of “Food, Inc.,” One Pig will have you wearing bow ties and selling bean pies in no time. The most disturbing recording I’ve heard all year, and that includes the ICP/Jack White collaboration.