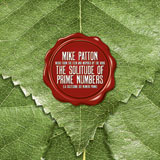 Mike Patton has spent the last few decades making experimental music sometimes too out there for most to grasp. He really tones things down sonically in creating a diverse and brooding film score entitled Music From the Film and Inspired by the Book ‘The Solitude of Prime Numbers’. His work here is quite the natural evolution after spending several years working on cinematic film music with Fantomas. It comes across more like a horror movie than the drama it accompanies. “Identity Matrix,” “Twin Primes,” “Isolated Primes” and the last part of “Weight of Consequences” break up the ominous tone and balance the album. Harsh synth juxtaposed with sparse piano playing propels the remaining tracks. Standout somber piano mixes with spacey electronics on “The Snow Angel,” sounding like an out-of-body experience in all its haunting majesty. “Quadratix” is one of the better horror score-sounding tracks, conjuring up images of slammed doors synchronized with warbling synthesizers and writhing insects set to dreary down-tempo piano playing. For a Mike Patton release, it feels a bit tame, but as a score it’s a rich, cinematic experience.