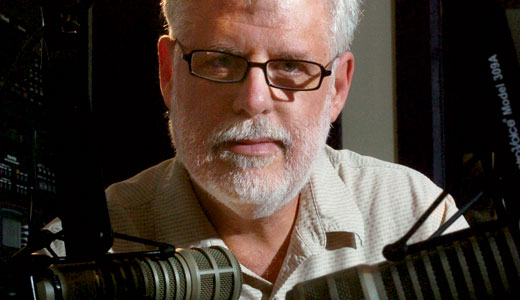 Even after two decades of hosting public radio’s “World Café” (heard locally on 91.9 WFPK, weekdays from 6-8 p.m.), David Dye has trouble explaining his job to some people.

“The parents of the kids at my kids’ school — I don’t think they know what it’s about,” Dye laughs. “I try to explain it, and I go, ‘Well, it’s sort of semi-popular music …”

“I remember seeing her at a convention,” Dye reflects. “Everybody was talking with everybody and having lunch, and nobody was paying attention to her, and I thought she was great. You look at Sheryl Crow now and you go, ‘How could you not have realized that?’”

The early years were defined by singer-songwriters, but Dye and his staff evolved with the times. “We went where the inventive music goes. We went with people who were doing more interesting things. It’s what we’re listening to, and it just made a lot of sense.”

Adapting has been a large part of why they have been able to continue — not just financially, but as music fans. Dye continues, “The original AAA artists are … I guess, in some ways, they’re not being as creative. We’ve lost a few stations who wanted a more folky thing, but that’s not really what we’re doing.”

Dye has interviewed almost 5,000 musicians. Occasionally, it doesn’t go as planned. Lou Reed behaved typically. “It wasn’t really a disaster — I think it was pre-planned. He just gave me one-word answers for a long time.” With pop singer Jewel, a misunderstanding interrupted what should have been a breezy chat. “Jewel and I didn’t click. I probably clumsily asked a question and she reacted; she thought I was insulting her, so she insulted me back. Like, ‘Whoa, all right!’

“Generally speaking, the staff here has found that my interviews are best with people I really like. If I don’t really love somebody, I can get myself into trouble,” laughs Dye.

More often, Dye has been able to spend time with artists and learn more about them. “I think one of the major things is not being afraid to ask the question that you’re nervous about. Or that you think might offend somebody. Because you have no idea … you can’t get inside their head.” Dye has the advantage of being in a studio with his subjects. “I try to be very conscious of reading people’s cues — either vocally or what they’re saying, just watching how comfortable or uncomfortable they are.”

Dye agrees with those who tell him he has “a dream job.” “We just started up this new ‘Sense of Place’ series, where we travel to various cities and talk to musicians. I mean, wow! It’s a fabulous, fabulous job.” A recent voyage to Dublin will soon be followed by trips to New Orleans and London. “People always say, ‘Why don’t you go out to see much music?’ Well, every day I’m seeing something coming in to me.”

One problem Dye has, which many share, is a lack of time to listen to all the new music that pours in constantly. He now commutes via train, and recently began a morning workout routine that adds an additional album’s worth of tunes to his day. Recommendations from staffers, colleagues and the web help him focus.

Even after what’s already been an amazingly long run, the world of “World Café” continues expanding. A 2007 book compiled some of Dye’s favorite interviews, and two live performance venues branded as “World Café Live” have opened in the Philadelphia area.

Dye’s biggest goal is to keep the sounds diverse. “People’s record collections are not one thing, and the more I remember that, the better. It’s great to have the Black Keys on, but it’s also great to have the Chain Gang of 1974, or something with Yo-Yo Ma. I like to mix it up.”