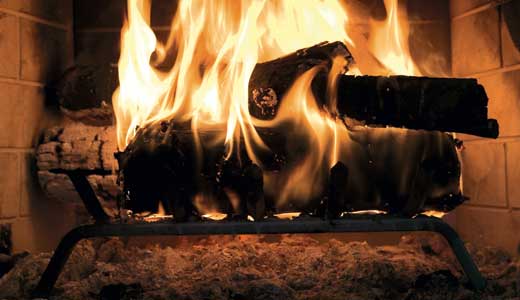 I made my own firewood today. Axes and chainsaws were not involved, no trees were harmed, and I didn’t even have to leave the house. Although the fuel warming my hearth this chilly December morning is technically not “wood,” it does burn cleaner, longer and hotter than a log of felled oak or birch. So says an EPA study on imitation firewood like the Java-Log, a key model for this experiment.

The EPA’s findings revealed that faux oak (or f-oak, as I call it) reached heats of more than 15,000 BTUs, versus hardwood’s 8,300 per pound. Also, emissions of particulates and carbon monoxide from these less smoky artificial varieties were found to be drastically lower — by 75 to 80 percent. The numbers are hard to ignore, especially considering the mostly recycled material that comprise these logs. Saw dust, peanut shells and coffee grinds are just some of the would-be landfill that companies like Pine Mountain — and a small D.I.Y. crowd — are compressing into firelogs.

Louisville being the fine coffee town it is, I decided to hit up one of our many local-and-proud java roasters for stuff to burn. I asked recent retiree Gary Heine if he still knew anyone in the used grounds business. He directed me to Heine Brothers’ community manager Chuck Slaughter and store manager Jonathan Musslewhite. The pair easily obliged — their shops routinely save coffee waste for “Breaking New Grounds,” a Heine subsidiary that converts spent grounds into compost.

With two buckets on hand, research began. I tested some of the online recipes that riff off the prototype created by Rod Sprules, the mechanical engineer who invented the Java-Log. Some methods worked, some didn’t, and others were too massive a pain in the ass. My first attempt was a spectacular flameout. What my wife dubbed “The Anti-Log” was amazing in that, regardless of how much blazing newspaper I abutted it with, the mass simply refused to take on heat. It was literally flame repellent, an always cool product that, if I could package, might become sought-after building material in fire-prone regions. Back to the drawing board, as they say.

Melting the binding wax should be the easiest part, but learning of paraffin’s sub-400 degree flashpoint, I thought better of blasting candles in the microwave, like one website suggests. The double-boiler method preferred by candle makers is safer, but I dreaded cooking wax and molasses in a good pan. Slowly liquefying the paraffin in recyclable bread tins in a low oven seemed best for temp control, and because the tins could later be used as molds.

The often-helpful site HowToGetRid.org advises cleaning the grounds with soap and water first — don’t do that. Another suggested freezing the log to help it set once out of the oven — don’t do that either. Just when it seemed this experiment might go up in smoke, a small, sample-sized log (8” x 4” x 2”) caught flame and burned blue for about 30 minutes.

Larger logs and longer drying times would likely yield a longer burn. Most of the tools and ingredients are probably sitting around your house already, like that bottle of molasses stuck to the pantry shelf. See the inset for a working formula and more tips on how to transform used coffee grounds (and perhaps those unscented, unwanted Christmas gifts) into a clean burning Yule log.

F-oak lore: A recipe for fake wood
Rod Sprules had a bright idea while designing a heated suit for Search and Rescue Squads. After reading that coffee burns more brilliantly than wood, Sprules used a repurposed clothes drier drum and car jack to compress a Dumpster’s worth of coffee grounds and melted wax into firelogs. It wasn’t long before his creation spread across North America like wildfire. Here’s how to make a scaled down version.

Break up hobby store wax or candles and place in bread pan with molasses. Spread out the grounds on a cookie sheet and dry them in a 260-degree oven. Dry them again. The drier, the better. Stir occasionally and, after about a half-hour, add the bread pan to the oven. Melt the wax and molasses — about a half-hour. Stir the melted mixture well and slowly add the grounds to the bread pan. Mix well and monitor to ensure the mixture doesn’t harden.

Remove from heat and compress carefully. I used hand clamps and a thin, cut piece of wood, but you can probably achieve the same with your hands and a piece of foil. Let the log set at least overnight. The longer you allow it to dry, the less kindling (newspaper) you will need to light it. Drier logs also emit less smoke.