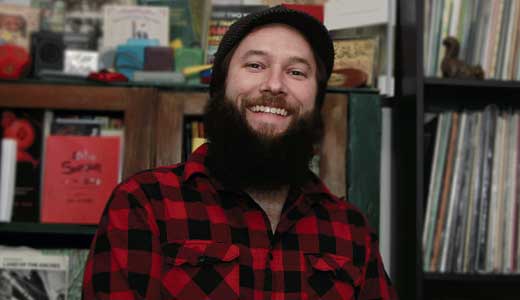 Sure, My Morning Jacket had a typically good year. Some even more local bands took great strides toward international success, while some played their final chords together; new venues, legal or otherwise, emerged; new stores selling musical instruments or recordings (and cookies, and houseplants) appeared, while the mother of all regional record stores said a tear-filled farewell.

But if there is any one individual who could be said to define the Louisville music scene in 2011, it just might be Sean Bailey. The 1996 Ballard High graduate moved back to Louisville from Colorado in 2003, when he began working at ear X-tacy. For eight years, Bailey was the always-smiling presence who worked closely with local bands, managing consignments, in-store concerts, and the store’s social networking profiles. He also earned a degree in anthropology from the University of Louisville in 2010 while working at the store.

Since 2008, our good friend has also been recognized for his beard — when he announced his departure from ear X-tacy in September, local music site Louisville Hardcore honored him with a post praising his work in the community titled “So long and thanks for all the beard.”

Though his talents behind the drum kit have occasionally been utilized, he has never been a conventional “band guy.” Bailey enjoyed his online work with the store so much that, after he left, he continued posting news about local music and giving away concert tickets on Facebook and Twitter under the name Louisville MUSICulture. The Facebook page has, as of last week, around 4,300 “friends.”

So who better to share the best of the past year than the man himself? We at LEO are proud to serve our community in this capacity, and delighted Sean is sharing his list (and checking it twice) with us.

Each entry below is in Sean’s words. “FT” is his favorite track from each album. —Peter Berkowitz

Banks Give Thanks: Paying Homage To The Jazz Trumpet Greats

As evidenced by the subtitle of this quintessential release, Banks (along with an all-star cast of distinguished jazz players) acts as musical docent of a well-curated tribute to influential jazz trumpet greats. This collection of songs, many of which Banks penned himself, demonstrates this rising figurehead as an already accomplished soloist, frontman and composer.

Exactly what you may or may not expect from a group of guys hailing from geographic locations such as Ecuador, Nicaragua, Mexico, Guatemala … not to mention Hazard, Richmond and Louisville, Ky. Appalatin fluently combine the sounds and styles indigenous to Latin music with that of Appalachian folk music, transcending into its own unique amalgamation of truly global music.

One of the first Louisville albums to be released this year, these guys (and gal) set the bar ridiculously high. Immaculate production, instrumentation dense with aural stratum, syrupy vocals that would impress even the most seasoned crooner, and a range of musical influences make this masterpiece nearly incapable of a worthy description.

FT: “Crazy for the Feeling”

Rarely is a band that’s so consistent and powerful on stage ever able to capture the intensity and — dare I say — fervor of that on record. This four-piece masters a propensity for keyboard-driven, melancholic indie rock.

Horror Rises From the Flames

FT: “For the Master”

These punk-metal legends are back, and they’re in tip-top form as they unleash their exclusive brand of bludgeoning assault on ears and souls everywhere — and I mean that in the best way possible. Grating and rambunctious, this angst-filled release will metamorphose even the most mundane mass of grey matter into a firing squad of overzealous neurotransmitters.

Hard-hitting, poignant, intellectual hip-hop from the new standard by which every other Louisville (or national, for that matter) solo emcee will be judged. Impeccable production that rivals, if not obliterates, all others standing in its path. Refusing to adopt a particular “sound” is where Jalin excels, allowing this crowning achievement to remain as influential as it is timeless.

If Then Not When

FT: “Arc of the Absentees”

An album many years in the making, this audible artifact serves as testament to the aptitude of the players themselves, in addition to the breadth of musical personalities both heard and felt while listening to this magnum opus. Heartfelt and nostalgic narratives oft times begin unembellished and swell to mountainous proportions within a single song.

These cats know how to party, and this album serves as the perfect backdrop for an evening of yellow fizzy beer, flasks of whiskey and dancing. Laden with hooks and sing-alongs, the ’Birds meld rockabilly, rock ’n’ roll and traditional R&B, all with staunch vocal arrangements that hearken back to the golden age of Doo-Wop.

Perhaps the most understated, if not gifted, fingerpicker living. This mostly instrumental endeavor, which doubles as a tribute to select and notable equines, intimates a careful likeness to John Fahey’s legacy while still maintaining a steadfast ability to be pleasantly uplifting through its spritely modulations and melodious merriment.

As Bright As Your Night Light

These burgeoning musicians have created a pièce de résistance well beyond their years, meticulously giving life to something erstwhile vacant in this diversely thriving music scene of ours. Scrupulously sequenced, the entirety of this work eerily manifests itself into a tapestry fraught with electronic and transcendental soundscapes.

FT: “Through the Reeds”

Per Mission is the moniker by which Louisville luminary Jason Noble composes electronic, ambient and otherwise minimal sonic abstractions. This double album pays homage and draws comparisons to such varied artists as Steve Reich, Philip Glass, Kieran Hebden and the RZA.

This lion-hearted, genre-bending debut seamlessly rubber-bands slow to mid-tempo tunes, flourishing arrangements, crafty instrumentation and reflective lyrical themes, many of which are saturated in reverb that would find solace in a cathedral — not to mention in one’s headphones.

This imaginative ensemble is the undisputed reigning hip-hop group in Louisville. Ranging from Chuck Deuce’s flawless production to the lyrical interplay between members, all of whom are accomplished solo emcees in their own right, there isn’t a single Achilles’ heel in this cartel.

Unquestionably one of the more unique albums released this year, this decidedly avant-garde and experimental undertaking confronts any and all knocking genres, welcoming many through the door while sending others packing. Fusing elements of classically operatic and French-pop vocal stylings, Softcheque couple lush and brash electronic landscapes, formulating a haunting affair.

This seven-track release is chock-full of grimey country-tinged barnburners that loosely muster their own distinct flavor of rock, equally suitable for a shindig as it is for late-night bourbon binging. Another one of those rare bands that’s able to capture the essence and dynamism of their live show on record.

Upper-echelon musicianship paired with top-shelf production synthesizes into one of the best bluegrass and traditional American roots music releases of the year. Overflowing with boot-tapping ditties, many of which will have you flat-out stomping, this jaunty album is refreshingly animated and infectious.

In and Out of Youth and Lightness

I thought there was nary a chance for these guys to top their ’08 release, Old Wounds; with this album, they’ve done just that. Not content with making the same album twice, Evan Patterson and company deviate to a place excessively brooding, complete with emotive lyrical themes and arguably a “heavier” sound than before, yet more in the vein of Swans or Nick Cave as opposed to “Metal.”

For even more of Sean Bailey’s Louisville MUSICulture picks of the year, go to bluecat.leoweekly.com.