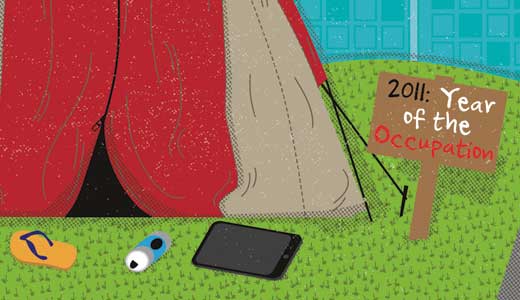 “Only a good-for-nothing is not interested in his past.” —Sigmund Freud, the father of psychoanalysis

But that was just the tip of the iceberg. The past year saw upheaval in nearly every corner of the globe: There was the Arab Spring, the European financial crisis, the Mexican drug wars, the Japanese tsunami and the British obsession with a bridesmaid’s bum.

Closer to home, we saw our own uniquely American form of social protest when a crazed Walmart shopper pepper-sprayed her competitors for an Xbox. Oh, and after 30 years of sitting idly by while politicians redistributed wealth upward, Americans finally got pissed enough to Occupy Wall Street. But at least we Kentuckians can all agree on what was undoubtedly the best development of 2011: We got to follow an attorney general candidate who was literally named P’Pool. (Still pinching ourselves!)

Did you look up from your apps long enough to follow current events? Let’s find out with this year’s Not Good For Nothing Quiz:

1. When Navy SEALs killed Osama bin Laden in Pakistan, what surprising stash did they reportedly find in his compound?

_______ A. A collection of hand-written sonnets to former Secretary of State Condoleezza Rice

_______ D. A signed copy of “Success is a Choice — Ten Steps to Overachieving in Business and Life” by Rick Pitino

_______ A. A Tea Party crowd’s reaction to a Republican debate question about whether society should let a hypothetical uninsured man die

_______ B. A shit-storm that erupted when Facebook added a news ticker to its layout

_______ C. A Twitter-fueled demonstration in Egypt, in which hundreds of thousands took to the streets to demand the ouster of President Hosni Mubarak

_______ D. Michelle Bachman’s nickname for the day each year when she has sex with her husband

3. In “The American Jobs Act,” President Obama and congressional Democrats proposed a bill that would preserve hundreds of thousands of jobs and invest in infrastructure like roads, bridges and schools. How did they propose to pay for it?

_______ B. Buying some weed from Mexico and selling it to Amsterdam

5. Taco Bell launched a damage-control media blitz in January after a class-action lawsuit claimed the chain’s taco meat contained only 34 percent beef and included what substances?

_______ B. Toxic soil leftover from the construction of Louisville’s Yum! Center

A. Wife of evil media turtle Rupert Murdoch, who slapped her husband’s would-be pie attacker during his testimony before the British Parliament

B. Agriculture Secretary Richie Farmer’s girlfriend, who was hired at the agriculture department one week before Election Day as a special assistant at $5,000 per month

D. Author of “Battle Hymn of the Tiger Mother,” who kicked off a vigorous discussion about parenting and Eastern vs. Western culture

G. Former Google executive who launched the Facebook page “We are all Khaled Saeed,” which helped spark the Egyptian revolution

20. With the world’s population now topping 7 billion, who is the world’s most typical human?

31. Which of the following new or proposed energy technologies is fake?

_______ B. A NASA proposal to entirely power the Earth using giant orbiting solar power plants by 2041

_______ C. A Mongolian plan to cool the city of Ulan Bator and provide fresh drinking water by deploying the world’s largest chunk of manmade ice

_______ D. A Nissan electric-car “urine battery” that is powered entirely by an onboard P’Pool

32. According to a March report on The Great Recession issued by the Economic Policy Institute, what percentage of U.S. households have zero or negative net worth?

_______ A. Sen. Mitch McConnell’s attempt to strong-arm the Big 12 athletic conference into admitting the University of Louisville

_______ B. Standard and Poor’s downgrade of the United States’ credit rating from “AAA” to “Trailer Trash”

_______ C. President Obama’s decision to bring all U.S. troops home from Iraq by the end of the year

34. What was Republican gubernatorial candidate David Williams complaining about when he said, “He’s sitting down there with his legs crossed, participating in Hindu prayers with a dot on his forehead with incense burning around him. I don’t know what the man was thinking”?

_______ B. Running mate Richie Farmer’s devil-may-care approach to running the Department of Agriculture, which had a habit of losing refrigerators

_______ D. Gov. Beshear’s attendance at a Hindu ceremony at a new business in Kentucky

_______ B. Closing a major interstate artery was a good way to get people thinking about building new bridges

36. Why was a proposed merger of University of Louisville Hospital, Jewish Hospital and Catholic Health Initiatives controversial?

_______ A. The proposed deal required the new company to join the Big 12 conference

_______ B. The deal stipulated that all female employees must cover their heads and wear patent leather shoes to work

_______ D. The deal would force University Hospital to follow Catholic Church limitations on reproductive services including abortion, sterilization and contraception

_______ A. Tongue-tied Texan Rick Perry in a Republican presidential debate

_______ B. Senate Minority Leader Mitch McConnell, defending his $27 million net worth, despite working virtually his entire career in the public sector

47. Staying true to his apparent “Keep Up the Crazy” pledge after Mitch McConnell sent Jim Bunning to that nice farm upstate, what loony remark did Sen. Rand Paul make?

_______ A. The American Lung Association is fudging its reports to make pollution look like the cause of asthma

_______ F. It’s often hard to get his poop to flush because of over-regulation

A. Resigned, B. Retired, C. Expired or D. Retired and Expired?

54. WDRB made news when video of what went viral?

_______ A. Meteorologist Jude Redfield being pelted in the groin with a water balloon

_______ 55. On Oct. 4, “Pure Politics” host Ryan Alessi introduced a story on the budget, tilted his head leftward, shut his eyes and snored loudly

_______ 56. In a speech to state lawmakers, University Hospital spokesman David McArthur told WHAS-11, The Courier-Journal and the ACLU to “Get off our backs!”

_______ 59. Metro Parks Director Mike Heitz got a restraining order against the WAVE-3 Troubleshooter

61. Which of the following movies was filmed here?

_______ C. “Harry Potter and the Second Part of the Eighth Novel That You Already Read Six Times”

62. Which Louisville legend is competing on this season of “Top Chef”?

63. Which musical genre does Mayor Fischer love most?

64. Which DJs or jam bands did not appear at this year’s Forecastle Festival?

65. After 25 years of high-fiving soccer moms and giving away cars, Oprah ended her talk show on May 25, 2011. What were her final words?

66. “Meatball Problems” was a term coined on which popular reality TV show this year?

_______ A. Karen Sypher, aka “Fertile Myrtle,” aka Inmate #10899, who was convicted of extorting The Rick after engaging in 15 seconds of hot restaurant sex with him

_______ B. Kentucky coach John Calipari, aka “The Squid,” who slighted the Cards by saying UK has the only real basketball program in the state

_______ C. Duke’s Mike Krzyzewski, aka “Coach K,” aka “The Rat,” who has the most career wins of any Division 1 coach (yet is still paid significantly less than Pitino)

_______ D. Former Mayor-turned-Lieutenant Gov. Jerry Abramson, aka “The Head,” who now garners only a tiny fraction of the media attention given to basketball

A. Ohio State football coach with a penchant for sweater vests who resigned after it was revealed he knew several players traded NCAA memorabilia for tattoos

B. Diminutive commissioner of the NBA, which started its season on Christmas Day following a contentious five-month labor “crisis”

D. St. Louis Cardinals third baseman who hit a walk-off homerun in game six of the World Series against the Texas Rangers before going on to be named MVP

73. The Indianapolis Colts are experiencing an unprecedented losing streak. What’s the most likely reason for this train wreck of a season?

_______ B. Peyton Manning was grounded after sucker-punching little brother Eli, quarterback for the Giants

_______ C. Peyton Manning is sitting out this season due to neck surgery

2. Only one answer per question, one submission per person.??

4. LEO Weekly is not responsible for entries that are late, misdirected or otherwise fouled up, including any befouled by computer or network malfunctions, congestion or lethargy. Such entries will not count.??

5. The top three winners and quiz answers will be published in the Jan. 18 issue and at leoweekly.com.