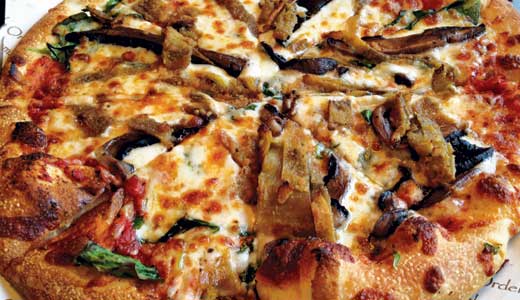 If you like the way the crew at Salsarita’s, Qdoba, Quizno’s or Moe’s throws together a burrito to order, using fresh ingredients they assemble on the spot, I think you might like Uncle Maddio’s pizza, too.

This new spot, in the new building located at Bardstown and Grinstead where the familiar green John Riley Auto Service long operated, does pizza fresh and fast, in an assembly-line model that appears based on the fresh-burrito concept.

There’s a logical reason for this resemblance: Uncle Maddio’s, now a 30-unit chain and growing fast, launched in Atlanta a few years ago under the tutelage of a founder who’d jumped ship at Moe’s.

The good news is that the staff here does not yell “Welcome to Maddio’s!” when you come in the door.

And the pizza, let it be said, is pretty darn good, winning on the basis of quality toppings, if losing a step or two for a crisp but ultimately forgettable crust that appears to have been designed with a focus on speed. That could be a handicap in the highly competitive, pizza-rich Highlands environment, where Maddio’s is situated about midway between Impellizzeri’s and the Papalinos/Wick’s cluster, and not much farther from Za’s.

Still, if you’re in the neighborhood and in a hurry, and a speedy, decent pie fits your criteria, it’s well worth paying a visit to this new Uncle. This goes double for locavores and hippie-food lovers, who’ll find free-range chicken, all-natural beef, locally produced vegetables, vegetarian and vegan interests, and gluten-free options all well represented on an omnivorous bill of fare.

The setting looks good, a high-ceilinged room decked out in tangerine, lime and pomegranate pastels that set a scene more tropical than Italian.

Take a look at the detailed menu overhead (or pick up a laminated copy from the rack), make your choice, and watch the guys in the plastic gloves set up the necessaries with near lab-like precision, complete with beakers and measuring cups to get the proportions right. Walk on around, pay your toll and take a number. Fountain drinks are available and so is a short selection of beers on draft, including one local — currently BBC American Pale Ale — with Sierra Nevada and others in bottles.

The three-panel menu covers a lot of ground, so don’t hesitate to wave off the eager guys behind the counter if you want to study it.

The pizza setup is fairly simple, but “simple” covers a lot of ground when you consider that you can build your own ($6.99 for a 9-inch regular pie, $11 for a 12-inch medium or $15.99 for a 16-inch extra large), taking advantage of three dough options, six sauce choices, eight cheese varieties and, count ’em, about 40 toppings, not excluding such unusual plant-based toppings as grilled tofu and vegan “cheese.” Mathematically, this works out to approximately a bazillion possible combinations.

If all this is just too much choice for you, then go with one of the dozen signature pizzas (“chef’s favorite pies,” $7.99, $13.49 and $18.49, depending on size). These range from iconic classics (“The Big Max” with tomato-basil sauce, mozz, pepperoni, Italian sausage, bacon and handmade meatballs) to the offbeat (Steak & Blue or, as befits a pizzeria with a quick-burrito heritage, the Southwest Baja).

Don’t want a pizza? No problema, signori e signore. Take your pick from salads or paninis.

Any of nine homemade salad selections are $7.49, and there’s a build-your-own option; side salads are $2.99 (for the house garden salad or a Caesar) or $3.99 (for a Greek salad). A half-dozen toasted paninis are all $6.99 and include meatball, chicken and turkey-based models as well as a crispy eggplant Parmesan offering for the veggie-vores.

Mary declared her chicken Caesar ($7.49) to be as good as any she’d ever eaten, saving perhaps high-end salads made tableside. The boneless chicken chunks were tender and fresh; the romaine crisp and clean, sprinkled with grated Parmesan, and a decent creamy, garlicky dressing served on the side at her request. In lieu of croutons, you can kick up your salad with squares of crispy, crunchy herbed flatbread (pizza crust) from the complimentary bowl available at the checkout station.

We went with veggie toppings on a medium “create your own” pizza ($11.99) and were pleased with proportions and style. A thick, lightly spicy tomato-basil sauce was painted on the thin crust, not dolloped on like ketchup. Portobello mushrooms and eggplant Parmesan were sliced and neatly arranged on top, along with plenty of fresh baby spinach and creamy mozzarella. All the toppings were high quality — two thumbs up. The paper-thin crust was crisp and crackly, a plus, but apparently designed for ultra-fast cooking and service. It lacked the artisanal-bread character of the city’s top pies. Still, I’d go back for more.

Our lunch was quick and satisfying, and service — in a facility new enough that a few of the staff appeared to be corporate trainers — was excellent. With iced water to drink, our medium pie and tasty Caesar came to $20.84, and to my sorrow, I couldn’t spot a tip jar or bucket. It wouldn’t have hurt my feelings to toss $4 or $5 back at the busy crew.