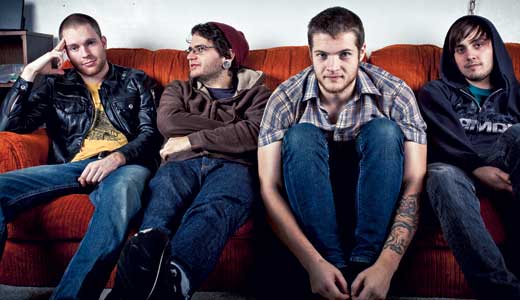 LEO spoke with Former Thieves vocalist Matt Schmitz a couple weeks ago as the band was enjoying nice weather while touring the West Coast. The Cedar Falls, Iowa-based band has spent most of the year touring behind their No Sleep Records release, The Language That We Speak. This show will pair them with two Louisville bands also signed to the Southern California label.

Matt Schmitz: Yeah, it was cool. We love Louisville.

MS: I just read that the other day! That’s a bummer, man.

LEO: Are you hearing those stories everywhere you go?

MS: Not so much. The ones that we’ve played, everything’s fine so far, but that one — that was a real big bummer. That was a really cool record store, and everyone that worked there was super, super nice. The show we played there last March was awesome.

MS: Yeah! The Chestnut House, we are so excited about that!

LEO: Do you play lots of house shows?

MS: That’s how we started. We basically played living rooms, basements — anywhere we were able to play. Since then, it’s been mostly venues, so when we can get back and play house shows and get back into that environment, we’re really excited about it. It’s going to be a nice change of pace to go from playing on big stages every night in front of a lot of kids who aren’t 100 percent sure who we are, to playing in a basement with a bunch of bands we really, really like.

LEO: And you’re friends with the bands here.

MS: Yeah, we’re best friends with the dudes in Xerxes. We’ve known those guys for years now. They’re one of our favorite bands. We’ve done some touring with them in the past. They’re on the same record label we’re on, and Frontier(s) is playing, too — we’ve never played with them before, but they’re on No Sleep Records as well, and the old singer from Elliott’s in that band, which we’re all big fans of, so we’re really stoked to see them play.

LEO: What inspires you when you write lyrics?

MS: It’s a big blend of issues. I have a habit of putting myself in a really uncomfortable position, in public — like, for instance, I’ll go into a coffee shop, or into a really crowded bar, and listen to people’s conversations. It really brings out a lot of issues. Most of our songs are about the ups and downs of the reality of how people are, the good side and the bad side of it. It’s been really cool to grow as a writer. When we started out, it was pretty one-dimensional. Since the last full-length, I’ve really gone in some new directions. We’re working on a new EP now, and we’re trying to spread out a little bit further with ideas, so it’s cool.

LEO: You sound like a reporter or a critic.

MS: Yeah, I think “critic” is the best term to use, because you’re putting yourself 100 percent out there, and surrounding yourself with stuff that’s really annoying or repetitive in people’s lives, just picking stuff apart and finding an issue, then trying to go a lot further … When we were working on this last full-length, a year ago, we’d been on tour for a long time, then we had to get home and finish up all these songs. We had a bunch of songs, but I had to really get down and finish all the words for them. We were getting down to the wire, so I basically had to go somewhere and pile through everything, so that’s what happened. “I’ll just go to a coffee shop and see if this works.” And I realized, “Wow, everyone here sucks!” I got a lot better material as I put myself in that scenario.

with Frontier(s), Xerxes and Lay Down & Die