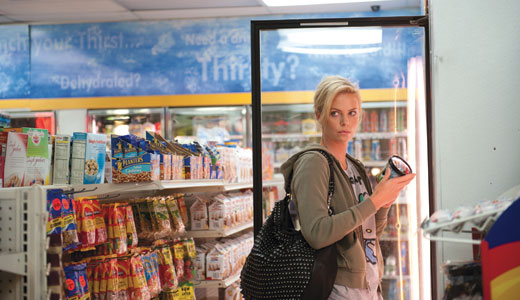 You know the girl. She always had a way of making you feel 2 feet tall. Her disapproving stare would shoot daggers through your self-esteem. Sadly, those holes remain. No matter what you did, you were never going to be more popular, prettier or preferred than her. Oh, she had a nice side on occasion — you might be invited to sit at her lunch table if you let her cheat off you in algebra. But between tests, you got thrown back into her shadow, which was cast far and wide. On bad days, I still feel caught in her shadow … even though it’s been more than 15 years since she reigned supreme.

So what happened to that girl? Did she get married to the perfect man, have 2.5 kids and live in a house with a white picket fence? What if she didn’t? What if she’s a miserable hot mess and longs for the best days of her life — high school? This is the premise of “Young Adult,” which pairs up the writer/director team — Diablo Cody and Jason Reitman — of “Juno.” It’s interesting that “Juno” was all about a character who finds redemption in being an outsider, while “Young Adult” takes aim at the popular girl who never quite grasps the concept of redemption (perhaps she should have taken her own tests in English class).

Charlize Theron plays mean girl Mavis Gary, a ghostwriter of a failing young adult fiction series who left her hometown of Mercury, Minn., in the dust after high school. Her sights were set on the big city — where fame, fortune and hope for a better life was promised. We find her anything but happy. At 30-something, Mavis drinks too much, sleeps away her days, avoids deadlines and is far from inspired. An email from an old high school boyfriend announcing the arrival of a baby sends her over the edge. So she heads back to Mercury to revel in her glory days and get back the man she had when she was happy — the happily married Buddy Slade (Patrick Wilson).

While on this mission, she spends her time at the local bar, where she reconnects with Matt (Patton Oswalt), a former classmate and former/current outsider. Matt humors her plan, and the two strike up an odd friendship — she finds companionship, he finds acceptance. And it’s here where the best scenes in the movie are developed — whether she’s trying to seduce Buddy or making fun of Matt’s action figure collection, Matt accepts her for who she is, dark side and all.

“Young Adult” is too realistic at times. Mavis fucks up. A lot. And she never seems to learn from her mistakes. Just when you see a glimmer of hope, she pulls out another asshole move that tops the one before. Perhaps that’s life. Some people improve, others spiral into crazy. Perhaps Hollywood has made happy endings an expected commodity — and when we don’t get them, we feel as pathetic and dejected as Mavis Gary. Guess she’s living in her own shadow now.