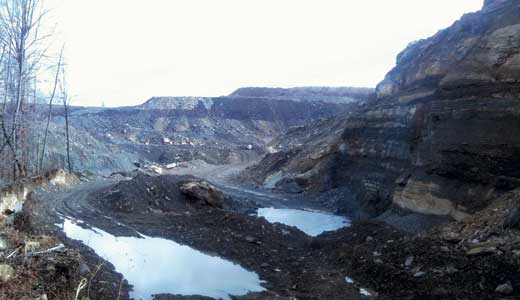 The mystery that remains today is why he was fired, as Campbell was not given an explanation, and neither Peters nor Gov. Steve Beshear are talking.

Campbell was a state regulator of the coal industry for almost 30 years, serving as commissioner since May 2008, when Beshear appointed him to the position. He oversaw the department that handled inspections and permits of mining operations to protect the environment and workers.

Oddly enough, one of the people most outraged by Campbell’s firing is Tom FitzGerald of the environmental group Kentucky Resources Council, who told Beshear not to appoint him in 2008 because of his past performance as commissioner of surface mining.

“I’d actually met with the governor before Carl was appointed this time to ask that he not appoint him, because I had been disappointed with his tenure as commissioner in the past,” FitzGerald says. “And I told Carl this the first time I met him, ‘I didn’t want you to have this job, but I’ve been very, very surprised how well you have done in terms of taking on some hard decisions.’”

FitzGerald says that those hard decisions include pushing for improved regulation of mining practices, which he says has ruffled some feathers among the politically powerful industry.

One area FitzGerald points to is reclamation bonds that coal companies put up for surface mine sites, saying that Campbell has been advocating for an increase in the amount of the bond. In a report released earlier this year, the federal Office of Surface Mining found that the bonds were grossly inadequate, as recent years have seen companies forfeit on their bond, leaving costly and messy sites that the state must pay to restore to an acceptable condition.

Fitzgerald also says Campbell has sought to improve how cumulative hydrological impact assessments (CHIAs) are done by the state — determining how mining affects watersheds — and has been pushing for enforcement actions against non-compliant companies, as a recent study showed the level of compliance is the lowest it has been in 20 years in Kentucky.

Campbell’s firing was the last straw for FitzGerald, who sent a letter of resignation from two boards to Steve Beshear — who had appointed him — also citing the 26 percent budget cut to regulatory agencies under his administration.

“I cannot in good conscience continue to serve as your appointee to either board in light of the current Administration’s environmental and energy policies,” FitzGerald wrote.

While Secretary Peters would not comment on Campbell’s firing, he tells LEO Weekly that his cabinet is making the necessary moves to improve the reclamation bond situation and CHIAs.

“The bonds have not been changed since 1992, and this administration agreed we need to modify it and get it up to date,” Peters says. “We’re listening to what (the Office of Surface Mining) says and we’re trying to make sure that the interested parties, both on the environmental side as well as the industry side, are kept informed with what’s going on. But it has been slow going.”

Peters says the reclamation bonds will undoubtedly be increased, but it’s just a matter of working out with OSM what is the best way to evaluate the bond that is required. He also says that their efforts to improve CHIAs over the past few years have been “very successful,” and that “the state, OSM, EPA, and industry have all worked together very well.”

Not only is FitzGerald unimpressed with the cabinet’s efforts in these areas, he sees possible similarities in Campbell’s dismissal to that of Ron Mills, a veteran state mine permit inspector who was fired by Peters in 2009.

Peters claimed to have fired Mills due to his poor management skills, but in a wrongful termination suit it was discovered that an employee of Alliance Coal was given advance warning of his termination by a Beshear aid. Mills had strongly challenged a mining practice used by Alliance, which is perhaps the most politically powerful coal company in Kentucky.

In a deposition in that case, Campbell — who was Mills’ supervisor — strongly rebutted Peters’ claims that he was a poor manager, citing the large reduction in his department’s staff. He also emphasized that he agreed with Mills that the mining practice in question is indeed illegal and had repeatedly conveyed that sentiment to the secretary’s office.

“I mean, there’s no love lost between (Campbell) and Secretary Peters,” says FitzGerald, who also claims that Peters tried to move him out of his position after the deposition.

Increasing reclamation bonds would mostly affect companies doing surface mining in Eastern Kentucky, but Alliance is based in the western part of
the state.

The Beshear campaign — which consisted of heavy criticism of the Environmental Protection Agency and his favorable treatment of coal — accepted more than $500,000 in contributions from coal and utility companies during the most recent election, and his inauguration committee is chaired by Beach Fork Processing President James Booth. Employees of Booth’s coal company — which mines in Eastern Kentucky — have given at least $80,000 to the Kentucky Democratic Party over the last three years, including $30,000 on one day less than a month before the November election.

Beshear tells LEO Weekly that the move to fire Campbell was up to Peters, but he went further with The Courier-Journal, telling reporter Tom Loftus he supports the decision. Campbell told Loftus that he still hasn’t been told why he was fired, and has yet to make a claim similar to Mills that he was fired for political reasons in order to please the coal industry.

Campbell did not return messages from LEO Weekly seeking comment
for this story.

Kentucky Coal Association President Bill Bissett tells LEO Weekly there were times the coal industry agreed with Campbell, and times they disagreed, but that they had “a good working relationship.” Bissett — who initially was wary of the Office of Surface Mining’s call to increase reclamation bonds — said he would be open to an increase, as long as the solution “was fair
and reasonable.”

Bissett says he would not suggest names of anyone to replace Campbell, but hopes that he or she “would have an open line of communication” with the industry and “would make decisions not on personal belief or politics, but on the merits of the individual issue.”

Peters tells LEO that the deputy director of the Department of Natural Resources is now the acting director, and that they are currently meeting with representatives of the Office of Surface Mining to work out an action plan for reclamation bonds that suits both parties. Federal OSM spokesman Christopher Holmes tells LEO that they expect a final report to come out soon.

Meanwhile, FitzGerald and environmental groups like Kentuckians for the Commonwealth anxiously await information regarding who will be the permanent replacement for Campbell.

“It will be a very telling decision — in terms of the sort of legacy that this governor wants to be remembered by in terms of environmental protection, which so far has been pretty abysmal — the sort of caliber of person that he’s going to put into that office,” says FitzGerald.