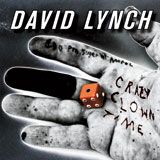 David Lynch – director of such cinematic classics as “Eraserhead,” “Blue Velvet” and “Mulholland Drive” – has decided to try his hand at music. While both his masterpieces and near-misses (like his underrated adaptation of “Dune”) possess a fantastic musical sensibility, it’s difficult to discern why Lynch felt it necessary to inflict Crazy Clown Time on the public. At best, such as with album opener “Pinky’s Dream” (with guest vocalist Karen O of the Yeah Yeah Yeahs), Lynch retreads the gothic Americana creepiness present in most of his movies. At worst, which describes most of the album, he sounds like a comically impaired Neil Young — except without Young’s heart-tugging sentiment, simple lyrical genius, or compelling melodic sense. Crazy Clown Time plays like a bizarre hybrid of Young’s famous failure Trans mixed with the terrible techno of ex-porn star Traci Lords’ 1000 Fires — except not as enjoyable as either.