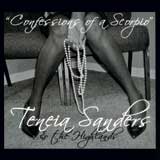 sonaBLAST! is the label every Louisville band wants to sign to. They’ve got the industry connections that have parlayed several bands to airplay on MTV’s reality shows. Lucky Pineapple on “Jersey Shore”? sonaBLAST! made that happen. What they haven’t done, however, is break an artist. Teneia Sanders has given her label a record that’s easy to work; it’s a sexy record and has a song for nearly any mood. Sanders’ sophomore effort, Confessions of a Scorpio, is an excellent extension of her debut, with a handful of songs reminiscent of Soulcatcher, including her HBO-premiered “Stand” and “Love You Thru Words.” More fun, though, is her expansion into the heartfelt blues of “Hard Times” and dirty funk of “Caroline.” These Confessions show a Scorpio who is comfortable in her skin, her voice, and sexuality. All eyes are watching to see if her label can do even more with a record than sync it with Snooki’s bingeing.