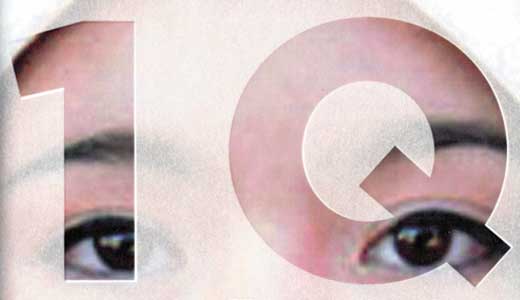 Haruki Murakami’s latest sprawling, improvisational novel comes at an interesting point in his career. At 62, Murakami is not an old man, yet his artistic powers are largely intact. Though no longer an aspiring young writer, he still is pushing the boundaries of his voice and imagination. “1Q84” is easily his longest novel to date, and everything about its size and presentation suggests it is a Major Novel, particularly the beautifully designed and crafted hardback edition. There is a lot to enjoy and admire here, but the problem is that “1Q84” doesn’t feel like the kind of major, career-defining work it aspires to be.

It neither breaks new ground for Murakami artistically, nor does it represent the perfect distillation of his interests and ambitions to date (that distinction still belongs to “The Wind-Up Bird Chronicle”). Instead, one can’t help but get the sense that Murakami grows tired of his project before he’s even finished it.

At his best, Murakami is a skilled explorer of fantastic worlds. He has said that he does little plotting in advance in order to keep the writing process new and exciting. When that works, as it does in the first volume of “1Q84,” the result is almost supernaturally compelling. In the novel’s magisterial opening scene, the female protagonist, a physical therapist and part-time assassin named Aomame, escapes a colossal freeway traffic jam when her cab driver directs her to a previously unknown service ladder. As she prepares to leave, however, the driver warns her, saying that when one does something out of the ordinary, “the everyday look of things might seem to change a little. Things may look different to you than they did before … But don’t let appearances fool you. There’s always only one reality.” It’s a quiet yet ominous introduction to the rabbit hole that Aomame, and the novel, descends into.

In the novel’s most satisfying sections, we watch as Aomame discovers how much the world she thought she knew has begun to change, initially in small ways (the uniforms of police officers) and finally in major, unmistakable ways, including the appearance of an enigmatic, possibly menacing second moon, which comes to represent this mirror reality that Aomame dubs “1Q84” (in Japanese, 9 and Q are homophonous).

The story follows almost one year in the lives of Aomame and her co-protagonist, a struggling writer named Tengo, as they explore this mirror world full of psychics, doppelgangers, assassins and dangerous cultists who receive their instructions from a group of inscrutable, supernatural dwarves. To reveal much more would rob the reader of the pleasure of following the serpentine twists and surprises.
It also wouldn’t clarify a thing.

Unfortunately, Murakami can’t sustain the momentum. Soon, the sense of excitement and discovery gives way to boredom, then frustration. The novel’s pace is hampered by its plodding structure, which alternates perspective every eight to 10 pages, dragging even the least interesting conversations out over multiple sections and dozens of pages. This problem is exacerbated by long, repetitive descriptions that often play to Murakami’s more unfortunate preoccupations, which range from the merely irritating (a fondness for designer labels) to the strange and uncomfortable (a fixation with the shapes of women’s breasts that even his female characters share).

By the time we reach the third volume, autumn is upon us and even Murakami seems bored with what he’s come up with. The novel hurries to shed strands of plot like so many dead leaves, until what remains is the surprisingly thin trunk — an unsatisfying love story that is somehow harder to accept than a world with two moons and all-seeing dwarves.