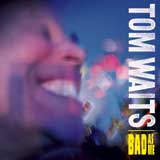 Tom Waits has more fun than you. His existence will always trump yours, even if his day is checking his mailbox and clipping toenails. He’s known this for a long time and, while he doesn’t throw it in your face, it’s a fact that, like a musical Malkovich, being Waits is a great existence. The character he plays has become that face your mother told you not to make for fear of it freezing that way, but that’s OK. One occasionally wonders if his closest friends and family miss the man who used to take his hat and scowl off at the doorstep, but it’s been so long since that man existed, they’d probably not recognize him if he ever reappeared. Bad as Me is another example of how much more fun Tom Waits has than you. These drunken troubadour songs and wharf-rock ballads are punctuated by guests like Keith Richards, Marc Ribot and others, though they stand far enough in the shadows that they don’t compete for stage time (as if they could). Instantly in the top 10 for the year. Infectious.