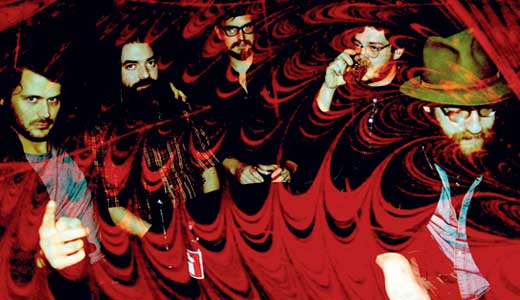 LEO: Tell me about your new supergroup.

Jonathan Glen Wood: Drew (Osborne) and Evan (Patterson) wanted to play music together, and then Todd (Cook) wanted to play. Since I became friends with Evan, we’ve always talked about playing music together. Then we asked Neil (Argabrite) if he wanted to play. It just worked out, man. We got together in, I guess, February, and we set a goal that we were gonna try and write and record something pretty quick. It was cool, going into the studio and having everything come together, and it actually sounded really great.

LEO: How do the members’ different influences come together?

JGW: From my end, there are some darker folk elements. From Evan’s end, there’s some really great washed-out guitar stuff. It’s definitely heavy, but it’s not like loud heavy, it’s just really intense. There are some repetitive elements, but we don’t have any long tunes — everything is pretty concise. There are moments when it all opens up. Definitely influences are late ’60s/early ’70s rock ’n’ roll; for me, ’70’s folk … some Krautrock stuff … even some pretty raw punk stuff comes in, musically.

LEO: And the name?

JGW: Old Baby was one of the first ones that Todd came up with. We cycled through so many names, and none of them really clicked. That’s the one that stuck.

LEO: Todd was previously in a band called Dead Child.