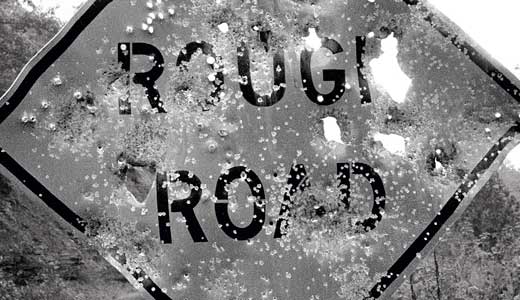 The 1970s were a time of navel-gazing. Thank goodness for this collective inward turn — it furthered the concepts and conversations for various civil rights groups (minorities, gays, women). Individuals, perhaps after too many pot brownies, also sought out new ways of being.

As far as I know, time travel hasn’t been invented yet. One of the best ways available to “see” the past is to visit an exhibition focused on a particular era — in this case, the mid-1970s in Kentucky.

“Rough Road: The Kentucky Documentary Photographic Project 1975-1977” is the creative labor of Ted Wathen, Bob Hower and Bill Burke. “Driving back to Louisville on an overcast February day (in 1975),” Wathen says, “(I saw) a ray of light burst through the clouds, a phenomenon that photographers like to call a ‘God ray.’ The ray was like St. Paul’s vision. I thought to myself, ‘Why not document all 120 Kentucky counties as a bicentennial project?’”

The time is right for the 84 photographs to resurface after its initial showing 35 years ago. “The images portray Kentuckians’ lifestyles and what was going on during the mid-1970s,” Wathen says. “Regardless of what generation you represent, this new exhibit creates a captivating look into that period in our state’s history and draws an interesting comparison and contrast between then and now.”

Questions started bouncing around my head as soon as I stepped into the Frazier History Museum: Will the photographs show how Kentucky fared during this time of political and social upheaval? Will the images enforce or challenge the stereotypes? Were bell-bottoms the norm even in rural counties?

The title of the show comes from Wathen’s bullet-riddled “Rough Road” road sign in Rockcastle County. In many ways it was rough; just take a look at the big-view camera in the exhibition, then envision lugging it across Kentucky’s hills and valleys for three years.

The photographs of people, places and things include urban subjects, such as Jefferson County’s “Cooking Ribs, July 4th” by Hower, or Wathen’s classic “Couple Attending the Kentucky Derby.” Nothing says the Infield like a hand down your sweetheart’s pants.

But the majority of the images are of rural life, mirroring the state’s population. The city girl in me was fascinated by Burke’s “Larkie Barker and Thunder,” photographed in Elliott County. All I can say is the ability to remain steady as a hawk’s talons grip your bare arm is a skill I do not possess.

Coal mining and tobacco farming are included, of course, such as Hower’s “Hand of Tobacco” from Bath County, and Burke’s various coal shots. It just wouldn’t be Kentucky without them.

Anyone game to shoot a contemporary version of “Rough Road”? Matching photographs of identical places, separated in time by decades, would be a invaluable for sociologists and politicians, as it could highlight what has changed for the better as well as focusing on where time has stood still, or even run backward.

Wathen is conducting gallery talks on Saturdays. Contact the museum for dates and times.