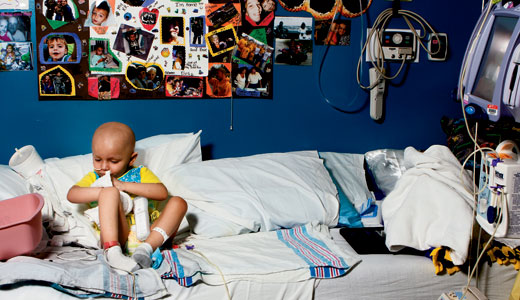 Paige Greene is an energetic young woman who lights up a room like a birthday cake studded with sparklers. Not only is she the photographer of “Redefining Normal,” she is herself a childhood cancer survivor. Moved to turn the camera onto other children who were living with cancer, she created two distinct bodies of work, now on display at the Kentucky Museum of Art and Craft. One is a photo-documentary series of the cancer treatment of Noah Mancuso, who was diagnosed in 2009, at age 10, with a form of cancer that had caused a tumor the size of a cantaloupe to grow in his chest cavity; the other is a collection of portraits of children undergoing cancer treatment at Kosair Children’s Hospital.

The collection of photographs of Noah’s 14 rounds of chemotherapy and 30 rounds of radiation shows a boy who not only goes on living his life inside the hospital, but amazingly, outside the hospital as well. In one photo, you see his bald head sleeping amidst a thicket of tubes and machines, and in another, he shares a tender moment with his mother, who shaved her own head in solidarity. In the next, he plays in the hospital’s revolving door. In another, he sits in a waiting room in a T-shirt that reads “Cancer sucks.” The moments where he looks normal and healthy — playing Little League — are contrasted with shots of him hiding among the hospital curtains, looking up wonderingly at all the adults in scrubs around him. Combined not only with a written statement about his experience and complementary statements by his mother and sister, it paints a picture of how an entire family is affected by the cancer diagnosis.

The second half of the show consists of single portraits of children either currently being treated or having recently undergone treatment for cancer at Kosair. Photographed by Greene, with the assistance of the hospital’s expressive therapies team, the kids sit on hospital beds, smile while standing on linoleum floors, and gaze into the camera wearing surgical masks. Even as the children are engaged in play, they are indoors — mostly in pajamas, seemingly engaged in a never-ending Saturday morning. Some are as young as toddlers, others are old enough to miss their proms. One teenager asked to have her portrait taken outside, by the river, as she anticipated an upcoming round of debilitating treatment and wanted to remember being outside.

Cancer has affected all of the children in these photographs — and for every child photographed, there is an entire family holding their breath. “You never hear your child cough and think it’s just a cough ever again,” said Noah’s mother, Jennifer Mancuso.

One of the most primal motivations for making a piece of art is to capture something and show it to someone else so that an understanding may be reached. Art is a tool for the creation of awareness and empathy; it is clear Greene is trying to show an experience that largely takes place in private, behind the closed doors of our hospitals. By bringing their faces, struggles and stories to the Kentucky Museum of Art and Craft, she not only helps bring their lives to our attention, but, by documenting their experience, helps them feel recognized and understood in the midst of an almost unfathomable experience. As cancer redefines what “normal” is for these children, Paige Greene’s photographs help make that redefinition one that can be seen, and hopefully better understood, by everyone.