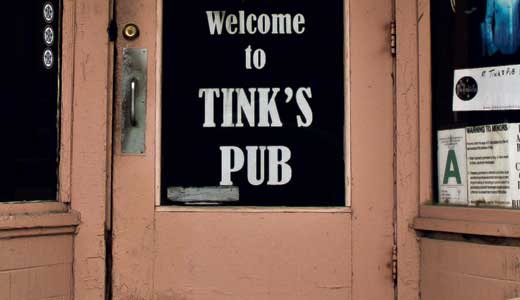 In a dark, crowded room adjacent to an empty dance floor, a cover band growls out “Son of a Preacher Man.” Clusters of women in blue jeans sway and sing along. Soulful riffs blend with tipsy laughter. The bar strives for a jazz club vibe with candlelit tables draped in black, but the feel is more like a house party.

Tonight is one of the last Saturday nights for Tink’s Pub on Preston Street, Louisville’s only lesbian bar. After 10 years, owner Stacy Grigsby has decided to shut down, with one final bash planned for New Year’s Eve. She says in the last three years, business has dropped by about a third. So after a few years of hanging on, Grigsby has decided it’s time to retire. She’s hopeful another gay-friendly individual will buy the bar before the end of the month.

Since the announcement was made two weeks ago, supporters have relayed heartfelt farewells on the Tink’s Facebook page and to Grigsby in person.

“I didn’t realize how devastated people would be,” she says. “I feel like I’m letting down the community.”

Even those saddened by the news don’t fault Grigsby for a personal financial decision. But there is disappointment felt in the LGBT (lesbian, gay, bisexual and transgender) community. Especially since the impending closure of Tink’s coincides with the end of Starbase Q, a gay bar on West Main Street. After seven years, its last night was Nov. 30. The owner of Starbase Q, Brian Travis, did not respond to LEO’s attempts to reach him.

“The city is losing two bars that I think it will miss,” says Holly Knight, a friend of Travis and host of a transgender talk show filmed at Starbase Q for several months. The closure came without notice. Her show, broadcast on YouTube, is now on hiatus. Knight remembers just a few years back when Starbase Q was packed even on weeknights, like Wednesday’s karaoke night.

“You couldn’t even walk in,” she says. “Then, gradually, there got to be a point where there would only be 30.”

Crowds had dwindled on weekends as well, she says, unless there was a special event.

And while a bad economy is at least partly to blame for Tink’s and Starbase Q shutting their doors, LGBT community leaders also point to a convergence of social change affecting gay bars. Technology has made it easier to meet people of all sexual orientations online, meaning gay bars no longer act as the only outlet.

“It’s very bittersweet. On the one hand, acceptance is increasing. There may be, in many people’s minds, a feeling that there is less of a need for specific lesbian, gay, bisexual and transgender spots,” Hartman says. “We’re losing some of our history when we’re losing these places.”

It’s one reason Hartman is working with Preservation Louisville to mark significant locations in the city’s LGBT history.

“What we’ve found is that so many of these early spots were indeed bars,” Hartman says. “These safe gathering spots were nightlife hubs where folks could come and commiserate and not fear.”

Fleur de Lez is a lesbian social group that meets up for monthly happy hours. This month, organizer Zanne Koehne chose Tink’s — one last time. Gathered at a table in the well-worn billiards room, the young women chat about the loss of the city’s lone lesbian bar.

Several years ago, the bar drew a younger crowd, many from University of Louisville. But over the years, faces aged. Younger customers found new spots as other more mainstream bars in town increasingly offered sporadic “gay nights.” Still, Tink’s is a staple that many in this group say will leave a gap.

“I have no problem with gay or straight boys,” says Stacy Staggs. “But I like Tink’s because I’m bound to run into lesbians. And I like lesbians.”

Chris Riffle recently moved back to Louisville from Portland, Ore., a progressive city that she says just lost a decades-old lesbian bar.

“I think it’s because people are assimilating into mainstream culture,” Riffle says. “They don’t need that underground place to go to be a lesbian.”

Still, LGBT-friendly bars play a critical role. Holly Knight says when men and women decide to come out into their “authentic self,” the most likely place they’ll turn for support is in a spot where they’re sure to find similar people.

“I think these bars are more than just bars,” she says. “They’re safe places.”

Knight says Starbase Q had become that secure space for Louisville’s transgender and transsexual population. Overall, she feels Louisville is a very tolerant, hospitable city, but the threat of harassment and the fear of losing employment over an alternative lifestyle is real.

“I’m not saying every gay person needs to go to a gay bar to buy drinks and support it,” she says. “But I think gay bars are important in that way.”

Louisville’s gay bars date back to the 1930s, according to the Encyclopedia of Louisville. Many were in hotels, including the Beau Brummel at the Seelbach and the Beaux Arts at the Henry Clay Hotel. These first bars were gay-friendly but not actually designated as “gay bars.”

But in 1953, Louisville’s first prominent gay bar — the Downtowner — opened on Chestnut Street. (It eventually burned down and relocated to the property that now houses The Connection.) Cate Fosl, director of the U of L Anne Braden Institute for Social Justice Research, completed an oral history on LGBT culture in Louisville. She says the Downtowner was the target of the city’s first gay rights protest in 1970 by a group that came to be known as the Gay Liberation Front.

In the late ’70s, Mother’s Brew, a lesbian and feminist bar located at the current site of the Kentucky Convention Center, also became a hotbed for activism. Local community activist David Williams, who founded U of L’s Williams-Nichols archive stocked with local LGBT history, says gay- bar owners were reluctant to support the movement at the time. They worried acceptance would diminish their customer base.

“They didn’t come around until the ’80s,” Williams says. It was in the ’80s and ’90s that the number of gay bars multiplied, mostly in the downtown corridor, with as many as 10.

“Frankly, what I think started killing off bars is the Internet,” he adds. “The bars were about the only place where gays and lesbians would feel safe meeting new friends and possible love.”

In the late ’90s, that changed with the advent of dating websites and chat rooms. Williams doubts, though, that gay bars will become entirely a relic.

“There’s still quite a lot of folks in the gay and lesbian community who are shy about being seen in public as a gay or lesbian person,” he says. “So there is always going to be a need for a gay space, a lesbian space.”

The bar industry is notoriously fickle, and the recession has only made it harder to endure. Some argue there are just not enough patrons to support eight or nine gay bars in tough economic times.

Williams predicts it won’t be long before another gay bar opens. Still, as someone who’s followed the history of LGBT in Louisville, it’s hard not to take note of this particular moment.

“It fluctuates. But we’re back down to where we were 30 years ago,” Williams says. “It’s a bit surprising.”