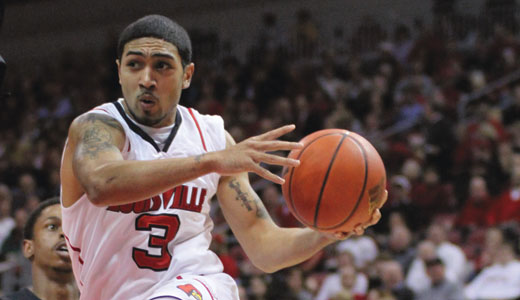 A half an hour after Louisville raced by Memphis Saturday, Clark Kellogg, the CBS Sports commentator, ran into guard Peyton Siva and a cluster of happy fans outside the Louisville locker room at the YUM! Center.

“Thanks,” Siva answers with a smile.

“Yeah, where you going to be?”

And it’s a hearty Oh-oh-oh, too, from observers who like the way Kellogg has caught U of L’s star guard off guard for a candid moment about Louisville’s New Year’s Eve date with Kentucky.

It’s hard to catch these Cardinals off guard. Aside from freshman forward Chane Behanan’s recent declaration that “we’re going undefeated,” most Louisville players are still giving reporters the old we’re-taking-it-one-game-at-a-time routine, at least until after U of L plays Western Kentucky on Friday and Big East rival No. 16 Georgetown on Dec. 28.

But who could blame anyone for looking happily into the future? Not with Louisville ranked No. 4 in the Associated Press poll, with Kentucky one spot ahead at No. 3. The Cards are undefeated, off to their best start since Denny Crum was coach, and, most importantly, many of the pieces and parts that have been missing from the Louisville attack are finding their way back onto the court. Siva, himself, had missed 26 practices with a bad ankle, but there he was Saturday, twisting around tall timber to find a way to flip up little shots that went in the basket in the final minutes.

And Rakeem Buckles was back. You remember Buckles, now a junior, who was out of the line-up with a bum knee for nearly a year. But there he was on Saturday, playing the up-and-down game — grabbing acrobatic rebounds and cruising the court on the fast break. Even sank a three-pointer, which would previously have been about 17 feet beyond his best range. “Shooting was the only thing I could do about basketball all that time I was recovering,” Buckles explains.

Louisville coach Rick Pitino says that up till now he’s been doing it with mirrors.

“We’ve been coming up with a special defensive game plan for each opponent, just to keep winning while we’re shorthanded,” Pitino says. But the coach knows tricky stuff won’t be enough to win in the Big East or in Lexington. He continues to press his team to play stronger defense.

“That’s his motto: got to do more on defense,” Siva says. “Defense is where we get most of our points, steals and fast breaks. Steals in transition. Our coach is a very defensive-minded coach.”

But a team has to score, too. Louisville has been hitting a dismal 32 percent of three-point shots and averaging just 74 points a game before finally dropping in 95 against Memphis.

Kellogg thinks the scoring will come.

“They’ll continue to get better as they are able to practice — and give Rick the versatility in terms of the numbers of guys he wants to play, and the way he wants to play them — that relentless pressure. I mean, shoot, they’ve got a chance to be really good.”

And practice will help.

“With all our defensive philosophies, it’s a hard thing for younger players to pick up and grasp,” says senior Kyle Kuric. “And offense is a whole other story. The thing about our defensive strategies is we’re trying to confuse the opponent, and sometimes we get kind of confused ourselves.”

Dieng missed his first four shots Saturday, then got determined, finishing with 14 points and 14 rebounds, playing all 40 minutes of the game — including an amazing swing over the rim as he was about to be flipped on a running fast-break dunk attempt. The rule is players are not supposed to hang on the rim (they forget sometimes) unless it is for safety, to keep from being flipped on their heads. That happened to Dieng last season, and looked like it might happen again, until the 6-foot-11 Dieng grabbed the rim and spun a vertical 360.

Most of the time, though, Dieng keeps it simple.

“Follow the game plan, try to do what the coach wants,” he says. “Not so much try to keep everything in your head, it’s more about repetition. You can only do in a game what you’ve practiced.”

Still, defense is just keeping the other guy from scoring. If a team wishes to be No. 4 — instead of No. 14, or 24 — somebody has to score. But who amongst these roll-playing redbirds is going to shoot?

A hand goes up, and it belongs to reserve guard Russ Smith. In the past few games, Smith has said, in effect, “I’ll do it!”

And so he has.

Russ Smith, no relation to starting guard Chris Smith, is about 6 feet in platform sneakers, and a former leading high school scorer in New York City. Pitino has light-heartedly branded him as a guy who never saw a shot he couldn’t take.

But with others injured, Smith moved up the bench. Saturday he dropped 24 points on Memphis, including 10 of 12 shooting at the free throw line and seven assists. And you can see Smith is brimming with excitement. “What I like,” Smith says, “is I’m playing now and helping the team. And the team is winning.”

But the team is still a work in progress. ESPN radio host Bob Valvano, who handles Pitino’s post-game radio shows, says that more than ever Pitino is coaching basic skills and moves as the game is being played. “Like a kid with a joystick, trying to control everything that’s happening.”

“So that’s the fine line you walk,” Valvano says. “You can suffocate a team like that. But if you just let them go up and down they’re never going to get better, and never going to be championship caliber.”

And speaking of talent, former Louisville player and retired Seneca High coach Chuck Nalevanko says the jury is still out on Louisville. “We haven’t seen the team yet,” he says. “They just haven’t all been out there.”

But size is a concern. Dieng and Behanan are solid, and the return of Buckles is a plus. But the Big East is a big man’s league.

“I just wish we had a few more 6-8 players who could rebound and defend off the weak side,” Nalevanko says. “I think Kentucky, for a team to limit their second shots to a handful, as Indiana did — you have a chance to beat them. If you don’t, they’re going to light you up. And they’re not the only tall team: Ohio State, North Carolina, probably those three are heads and shoulders above everybody.”

Louisville is not done getting its line-up in order. Mike Marra is out for the season, but Kevin Ware, a proto-typical Louisville-looking guard — tall, with long arms and basketball hands — played in his first game Saturday. Somewhere down the road, 6-6 freshman Wayne Blackshear, who averaged 32 points and 14 rebounds a game in high school in Chicago, could join the team after shoulder surgery.

“I kind of look at it from an individual talent standpoint,” Kellogg says. “You start with Kentucky and North Carolina, UConn and Syracuse, and Ohio State if Jared Sullinger is healthy. And from a talent standpoint, Louisville is right there in the second tier.”

So you’ve got to give it to the Cards — at No. 4, they’re at the top of their tier. But Louisville has played 11 of its first 12 games at home. The next test will be to see how they do on the road. And they won’t have to go very far to find out.