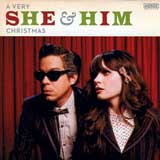 Shim’s adorkable She, Zooey Deschanel, has had quite a fall season. She’s become a mainstream TV star, she’s getting divorced, and then there’s this, a classic Christmas album. By “classic,” I mean “as expected,” or surprisingly lacking in surprises or innovations. She and M. Ward (Him) do their usual thing, including typically skillful guitar textures from Ward, but if you like Christmas music and/or have any Christmas albums — well, this is another one of those. She tries to do her best Ronstadt, especially on “Blue Christmas,” and yes, the audiophile duo do take on tunes from the Beach Boys and NRBQ, but if you aren’t charmed by blue-eyed devil Deschanel, you probably won’t enjoy her solo ukulele rendition of “Silver Bells.” If you are, you will, and so on. It’s as if the pair have gone so far beyond irony that they forgot to not take this so seriously. Is it bah humbugable? Not necessarily, but is it worth $15?