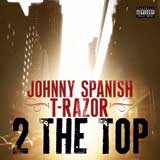 It’s difficult not to get a contact high while listening to this quickie from these two locals. Spanish and Razor have both been busy and moderately successful as solo acts. Spanish is a blog favorite; his melodic sing-song approach to his vocals easily makes him a contender for expansion into radio. Spanish has dropped several underground long-players, giving voice to a more street-oriented rough-and-tumble than much of what Louisville has released this year. 2 the Top shows that the pair should think about a more permanent arrangement, as the disc succeeds on every level, higher than either of them have done by themselves, no pun intended. The smart production goes a long way and is well suited for both of their voices. Soulful samples and vintage keyboard sounds make for great driving music; you can almost forget that you’re sitting in traffic with this in the deck. One only hopes that future efforts expand the subject matter beyond botanical pursuits. Their pairing is just too good to get lost in a haze of smoke.