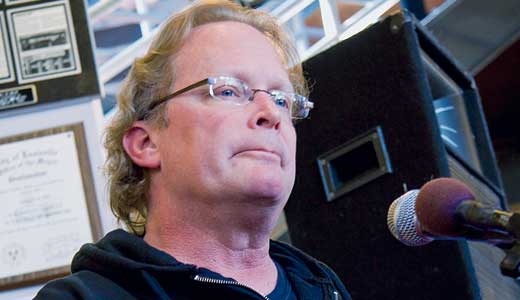 It was a weird ending for the record store that popularized the “Keep Louisville Weird” slogan.

Though beloved local institution ear X-tacy had struggled to survive in the new century, no one expected it to end the way it did.

They failed to open on Saturday and left no notice about why they were closed. An employee called singer-songwriter Alan Rhody, a Nashville resident, at about 9:30 a.m. to tell him his 3 p.m. in-store performance wasn’t going to happen.

ear X-tacy remained inexplicably closed for several hours before LEO first started hearing something was wrong. Upon arriving at the store late Saturday afternoon, all was quiet, dark. The merchandise was still there, visible through the glass doors, but otherwise … nothingness.

Calls and emails to employees current and past were met with a wall of silence. Around 5 p.m. Saturday, one source told me that “legally” nothing could be said until an announcement was made. LEO then discovered that the store’s Twitter and Tumblr accounts had been removed.

Sunday came, and the silence continued. The store remained closed, frozen in an unexplained moment. An update on the store’s Facebook profile said an announcement about the store’s future would come Monday. Given that the busy holiday shopping season was on the horizon, it didn’t make sense that they would just close, suddenly, or that it would happen now.

When owner John Timmons first made a public plea for support in February 2010, he called a press conference at the store, using the media to help the public understand how dire their financial situation was. Years of Apple products, illegal downloading, powerful chains and an unsuccessful investment in Think Indie, a digital site intended to challenge iTunes, had taken their toll, and he urged local customers to come back to his brick-and-mortar business.

On Monday morning, I arrived at the store shortly before their expected 10 a.m. opening, anticipating the lights turned on and the doors open, or dozens of passionate supporters gathered — sharing stories of the first cassette they’d ever bought from the store, or buying a Rachel’s CD from Jason Noble himself, or hanging out in the store on a Friday night when they were under 21 and had no better place to go.

Instead, I found closed doors again. Around the city, people were growing increasingly nervous about the future of the landmark.

As Monday droned on, no time was given for an announcement. Concerned supporters continued to ask questions, and one ex-employee decried “media vultures” on Twitter.

A Facebook update in the 4 o’clock hour promising an announcement was quickly deleted. Finally, around 5:50 p.m., the store’s profile issued Timmons’ official announcement that “ear X-tacy is no more.” The emotional letter, which gave no explanation for the abrupt closure, read in part: “It has been a dream come true … actually, a dream exceeded, to be part of your musical lives here in Louisville for the last 26 years … The record store experience has been the only child in my life. Now, it’s time for me to let it fly.”

As of press time, it remained unclear what will happen to the merchandise, including numerous local, self-produced recordings. There is no indication that there will be a liquidation sale, or a going away party. The store often described as a community meeting place left supporters nowhere to turn to express their feelings except the Internet — the very beast that, at least in part, was to blame for the store’s demise.

On Tuesday morning, a fan named Tammy commented on the store’s Facebook page, “Where on Earth am I going to Christmas shop now???!!!” Whoever is running the store’s page replied, “Poor Tammy! Find another local record store. I can give you a list :)”

This story has been revised to reflect the following correction: An ear X-tacy employee called musician Alan Rhody around 9:30 a.m. Saturday — several hours earlier than initially reported — to cancel a scheduled in-store appearance later that day.