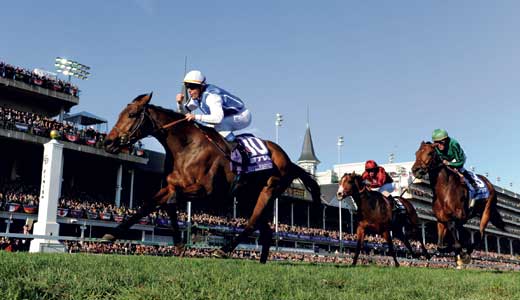 With 167 Breeders’ Cup-entered horses on the grounds and stretching their legs in the brisk morning air at Churchill Downs, the fields are set for the 28th renewal of thoroughbred racing’s fall classic — 15 championship-caliber races to be run this Friday and Saturday at the sport’s most storied venue. The backside barn area is brimming with wonderful tales of the turf and a scattering of useful information. But we’ll get straight to the picks.

Note: We intend to offer a service here. Our sole purpose is to help ordinary investors become rich at the races. Beginning on …

Juvenile Sprint (6 furlongs) — Don’t see one we like. Besides, it is dangerous to hit too early at the races.

Juvenile Fillies Turf (1 mile turf) — Elusive Kate is the top 2-year-old filly in France, and stands out on the grass here. Somali Lemonade closed like a jet at Keeneland. That’s all you need to know.

Filly and Mare Sprint (7 furlongs) — Turbulent Descent looks like a lead-pipe cinch. But Brazilian-bred Great Hot could turn on the heat under top female jock Chantal Sutherland. Her Smile, owned by celebrity chef Bobby Flay, sliced over the track last weekend to rate a longshot’s chance. The trifecta answer is in there someplace.

Juvenile Fillies (1 1/16 miles) — Pretty much unfathomable, with a raft of promising 2-year-old fillies coming to the race ready to run. My Miss Aurelia has done it all Up East, while Weemissfrankie is perfect Out West. But we kind of like Miss Netta. And Questing. See the problem? Best advice: Spin the bottle.

Filly and Mare Turf (1 3/8 miles turf) — Picturing a fleet of European grass fillies loping along, then flying to the wire. Nahrain is undefeated, but Misty for Me sounds like a name that might win this race. Shared Account won it last year at 46-1. But the pick is Announce, at about 7-1 for trainer Andre Fabre.

Marathon (1 3/4 miles) — This race produced a disqualification and a jock’s fistfight last year. Who knows what will happen this time?

Juvenile Turf (1 mile) — Lucky Chappy came off the boat from Italy to rally from last to third at Keeneland last out. Probably a sucker bet.

Sprint (6 furlongs) — In the 27 previous runnings of the Breeders’ Cup Sprint, this handicapper has never picked the winner.

Turf Sprint (5 furlongs turf) — The Between the Sheets Method might work on this race: Say the name of each horse, followed by the words “between the sheets.” See which sounds best.

Dirt Mile — Trappe Shot, favored in nine of 11 starts, waits for the signal, then takes his shot.

Turf (1 1/2 miles) — Now to the heart of the card and the Late Pick Four, beginning with the $3 million Turf, at 1 1/2 miles on the grass. The top trainers in Ireland, England and France sort through their stables looking for horses who prefer the firm ground and tight turns of American tracks. Henry Cecil has Breeders’ Cup pro Midday pointed at this spot. But Sir Michael Stoute beams in Sea Moon for the upset.

Juvenile (1 1/16 miles) — The Juvenile should be a fall preview of next spring’s Kentucky Derby contenders. But the race is generally won by speedy types who want nothing close to the Derby distance. The horse of the moment is Union Rags. Of the others, tab Hansen for speed, and Alpha to come along late. But we’ll be wearing the Union Rags.

Mile (1 mile turf) — As good as Goldikova is overseas, she’s even better here. The fast filly from France cruises the tight turns effortlessly, then darts from the pack to win going away.

“It looks like something unreal, to try to win a fourth Breeders’ Cup,” says Goldikova’s trainer Freddie Head, who also won the Mile twice riding Miesque. “But she is very well, and I’ve been happy with her since her last run.”

Speaking with Thoroughbred Times writer Frank Angst, Head notes that Churchill Downs is more of a home track for Goldikova than the long-straightaway courses of Europe.

“She loves the two turns, loves the left-handed track, and she loves racing in America, the way the races are run,” Head says.

If one were inclined to bet against, the possible Mile upsetters might include Gio Ponti, Mr. Commons, and maybe longshot Turallure.

Classic — Havre de Grace is named for a long-ago track in Maryland, where horses like Man o’ War, Seabiscuit and Roamer once roamed. Regulars nicknamed the track “The Graw,” but nobody at Havre de Grace’s barn today calls her anything like that. Havre de Grace beat the boys in the Woodward, and was nipped a nose by rival Blind Luck at 1 1/4 miles. Last out she aired by eight in the mud. So she’s a legit choice who always tries.

Havre de Grace, incidentally, was bred here in Jefferson County by Nancy Dillman, at Stonegate Farm, owned by Nancy and her husband Dr. Carl Dillman. The filly’s pedigree is shaped along the same cross as Barbaro.

The favorite in the $5 million Classic, however, might be So You Think — a New Zealand-bred who started in Australia, where he twice won the $2.5 million Cox Plate for famous Aussie trainer Bart Cummings. Moving on to Ireland this season, So You Think has won four of seven starts for trainer Aiden O’Brien — with total earnings now at $7 million. O’Brien manages some of the best horses in the world, but we find him undependable on this side of the pond. Some of the horses he sends over triumph gloriously. Others, not so much.

The horse that would have given the Classic real sparkle is Kentucky Derby winner Animal Kingdom, out with an injury since the Belmont. Of the rest: Game On Dude likes it near the front. Flat Out is steady, and Stay Thirsty worked well over the track. The race is too long for Uncle Mo and To Honor and Serve.

If the favorites get too tired, Drosselmeyer could pick up the pieces at a price. And good old Ice Box could come along to help with the trifecta.

Really, we don’t love any them. But it’s the last race of the day, so you gotta play.