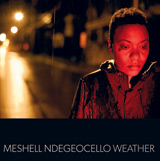 We start with this: Weather is the sexiest album of the year. That it’s out in time for winter makes the cuddle buddy season that much better. Ndegeocello teams with producer Joe Henry for the first time in a decade, and the loose energy echoes the raucousness of Joe’s latest, Reverie. Two covers, Leonard Cohen’s “Chelsea Hotel” and the Soul Children’s “Don’t Take My Kindness for Weakness,” bring a breezy familiarity in the midst of moodiness. “Oysters” will destroy you. The spacious piano and Ndegeocello’s voice barely above a whisper, the white noise of the tape as much a force as the words, the plaintive vibe doesn’t fail to mist eyes even after double-digit listens. The album then thrusts you into the marching drums of Deantoni Parks for “Rapid Fire,” a rare effort that would fit on any of her previous albums. “Crazy and Wild,” a duet with former Revolting Cocks singer Chris Connelly, is an odd pairing on paper, but the jazzy cut has an easy sensuality that is undeniable. Weather is instantly among the year’s best.