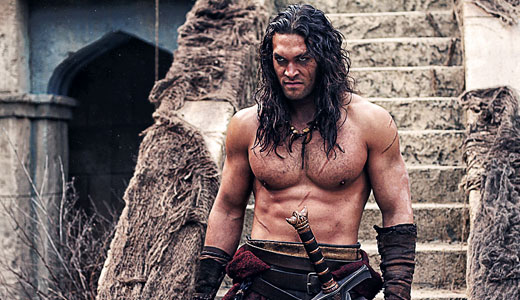 You can’t do a remake of “Conan” without expecting comparisons to the original; and, simply put, Jason Momoa (“Game of Thrones”) is no Arnold Schwarzenegger. Ah-nold knew he couldn’t act, so he cranked up the irony of the whole affair, making his character far funnier and more interesting than Momoa, who tries to be a true thesp in each scene. Stephen Lang and Ron Perlman do their usual tough-guy shtick while the breath-taking Rachel Nichols and Rose McGowan provide the tits. Not “bad” per se, just not as much bloody fun as the original.

Man, what a rush! Writer-director J.J. Abrams cooks up his own “E.T.,” filled with bratty lead-kids awash in the small-town suburban hell of 1979, and big chunks of a wonderfully icky monster (who is not the villain), all sautéed in a rich broth of period rock ’n’ roll. A group of “Goonies”-ish boys making a home zombie movie accidentally film a train crash, which releases a giant, pissed-off … something … on their small town. The young cast is excellent, especially burgeoning babette Elle Fanning, whose haunting eyes and try-anything spunk give the film its heart. We liked it.

If you like ’em over the top, here’s the movie you’ve been waiting for! Rich Carucci’s anus is infested with hyperactive army ants who protect him from bullies. Read that again. Co-stars bodacious and bosomy Lindsey Graham, Miss New Hampshire of 2009, as Mary-Ant. And, no, we are not making this up.

This movie was heralded as the movie that would make Dominic Cooper (Howard Stark from “Captain America”) a mega-star. Meh. Supposedly based on true events, he plays dual roles as sadistic Uday Hussein, the Black Prince of 1987 Iraq, and a former classmate chosen to be Uday’s double — a ploy to protect Hussein from assassination. Cooper is very good, but the rest of the movie just so-so. With ravishing Ludivine Sagnier as Hussein’s mistress.

A captivating doc on the making of Broadway’s first-ever gay play, “The Boys In The Band,” the resulting 1970 Hollywood version, and how much the world has changed since.

NOVA: FABRIC OF THE COSMOS

Physicist/author Brian Greene takes us on a wild ride into how the universe really works, revealed through the spooky science of quantum mechanics. A brilliantly strange and wondrously magical experience that will, quite literally, change the way you perceive “reality” (the only word in the English language that should always be enclosed in quotes).

Image Entertainment has repackaged five of Roger Corman’s exquisite Edgar Allen Poe-inspired flicks into a pair of cheap, must-own discs, all starring Vincent Price. The first contains “Masque of the Red Death” and “The Madhouse.” “Masque” is, of course, legendary; the second a lesser-known bit of ham with Price at the top of his game. The other disc contains “The Raven,” “The Pit and the Pendulum” and “Tales of Terror.” “Pit” is good Gothic fun, with Barbara Steele, but “The Raven” is one of Corman’s goofiest, letting Price, Peter Lorre, Boris Karloff, Hazel Court and Jack Nicholson run silly, spouting some of his dumbest ever dialogue. Recommended.

Now in a Blu-ray/Criterion edition: Wes Anderson’s quirky-funny flick, starring Bill Murray at the top of his game. He’s a bored millionaire who is attracted to charming first-grade teacher Olivia Williams. But he has a rival in clever 10th-grader Jason Schwartzman, who excels at extracurricular activities and hell-raising, but can’t seem to get his grades up. Kewl.

This week’s big ol’ chick flick, with extra Nazis. When the Jews were being forcibly removed from France, a 10-year-old girl locks her young brother in the closet to protect him — not realizing she could never return. Years later, an American journalist (Kristin Scott Thomas) moves into the family’s house and discovers her own family’s complicity with the Germans.

SPY KIDS 4: ALL THE TIME IN THE WORLD

Director Robert Rodriguez loves this flashy, colorful franchise that features Alexa Vega, Daryl Sabara and Danny Trejo — and who can blame him? When Jessica Alba takes over the mom duties from Carla Gugino, the new fam heads out to thwart the machinations of an evildoer who can control time. Not the best of the series, but lots of eye candy and fart jokes.

Hope Davis stars as the overwrought housewife who gets amnesia in this R-rated comedy/drama. The phrase “second chance” bounces around a lot, but not as much as buxom co-star Christina Hendricks (“Mad Men”) — not to mention sexy little Gabrielle Anwar, Rachael Leigh Cook, Britt Robertson and Madeline Zima! Wow, what a great-looking cast! Won’t change your life or anything, but worth a look.

In six seasons, this lesbian drama changed the TV landscape in unpredictable ways, not the least of which being that it made cable “premium movie channels” the de facto home of gay programming. And it was to Showtime/Paramount’s credit that they were able to keep the core cast — Jennifer Beals, Leisha Hailey, Laurel Holloman, Mia Kirshner and Pam Grier — together for the entire run by providing great scripts. Now repackaged at a reduced price: all 70 episodes, plus bonus goodies, on 25 discs.

While the American version of “The Office” with Steve Carell is OK, we prefer this Limey original with Ricky Gervais, all spiffed up in honor of the series’ 10th anniversary, including a smattering of great new bonus goodies. Contains all 12 episodes, the two-part Christmas special and the original pilot.