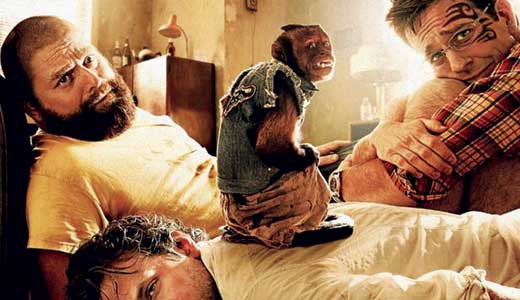 Lucky-dog Justin Timberlake lives out every adult male’s fantasy — being paid to have constant, playful snuggly-bunny sex with Mila Kunis — in this romantic comedy that asks, “Can two friends get their ya-yas off without all the hassle of dating?” The answer, of course, is “Hell, yes!,” but Hollywood would have us believe otherwise in this well-written, lighthearted, fun comedy with an amazing cast (Woody Harrelson, Jenna Elfman, Richard Jenkins, Patricia Clarkson, Emma Stone, Andy Samberg, Shaun White and more). One of the best adult romcoms of 2011.

Bradley Cooper, Ed Helms, Zach Galifianakis and Justin Bartha up the WTF? quotient, taking this “Hangover” to Thailand in hopes of topping their original debauch-a-thon. Since they no longer have the element of surprise, the filmmakers made this one even less PC, adding an unexplained monkey — in a Rolling Stone T-shirt, no less — and some truly embarrassing (and painful looking) face-tats. Funny as hell; if you liked the first one, you’ll love this.

While this obscure sci-fier has made the rounds of cheap video compilations, this is its first-ever — and well-deserved — stand-alone release in any video format. Herbert Marshall, Constance Dowling and Richard Egan star in a murder/spy caper, set in a secret underground lab, home to a pair of lethal experimental robots that aren’t quite what they seem. A good, solid ’50s outing that clearly influenced “The Andromeda Strain” some 17 years later. Highly recommended.

A three-pack of MI films starring local lad and former Franciscan seminary student Thomas Cruise Mapother IV. If you need any further enticement beyond the non-stop action, thrills, gorgeous women, hot cars, explosions, high-tech savagery and unbelievable stunts … then why do you even own a television? On DVD and Blu-ray.

While some Jim Carrey kidflicks have been too, uh, “sophisticated” (his Grinch still gives us the squirts), this one is spot-on. Here he’s an aggressive, relentless real-estate agent, ensconced in a Park Avenue penthouse, alone except for the brief period every other weekend when his otherwise-ignored kids come to visit. But an unwelcome pinniped bequest from his pop — eventually growing to six dancing penguins — turns all that upside down. Wonderfully restrained and enjoyable for all ages.

If you are an MST3K fan, hie thee to a vidstore and snatch up this long-overdue release containing two of their most-requested titles, “Mighty Jack” and “Time of the Apes.” Both were originally Japanese kiddie TV series, but the egregious liberties taken as they were re-cut and dubbed for American audiences left them unrecognizable. With little left in the way of identifiable plot, the inevitable riffing by Joel, Mike and the Bots is raised to an art form. Also contains “The Violent Years,” “The Brute Man” and some of the best bonus goodies of any MST3K release. Terrific.

NO WOMAN NO CRY

Former Calvin Klein supermodel Christy Turlington Burns does a damn good job directing this investigative piece on the status of at-risk pregnant women around the globe, 50 percent of whom will die before, during or after labor. The most surprising piece is the one filmed at a prenatal clinic in the United States.

One big-ol’ literary chick-flick for the Oprah Army, set in the ’60s South. Emma Stone sets the tale in motion as a post-college newspaper columnist who plumbs the local domestic servants — anonymously — for family tales of the social elite. When one loses her job due to a leak, the rest flood the paper with tales, leading to a catharsis among the uptight white women. But it all works because of a cracker-jack cast including Viola Davis, Octavia Spencer, Bryce Dallas Howard, Jessica Chastain, Cicely Tyson and Sissy Spacek.

The Criterion/Blu-ray release of our favorite — and most underrated — Hitchcock flick. Gorgeous Margaret Lockwood is heading across Europe on a train. There she befriends clever oldster Dame May Whitty — who almost immediately disappears! Lockwood turns sleuth to uncover what happened to her friend, with help from Michael Redgrave. At turns exciting, funny, shocking and smart, but never less than 100-percent entertaining.

THE SIMPSONS: THE FOURTEENTH SEASON

The entire Emmy Award-winning season, with guest stars including Mick Jagger, Lenny Kravitz, Tony Hawk and Blink 182, complete with “Treehouse of Horror XIII” and bonus goodies. Also available in a limited collector’s edition, molded in the shape of Kang (or is it Kodos?). After 14 seasons, any additional commentary by the likes of us would be superfluous.

We were never big fans of the Smurfs … though there was always something kinda sexy about that Smurfette. So we didn’t expect this live-action/CGI outing to be near as much fun as it was, largely thanks to a great cast and a good script with lots of in-jokes that never takes itself too seriously. Gargamel (Hank Azaria) chases the little blue rats into our reality (via a gag borrowed from “Enchanted”), where they take refuge in the apartment of expectant parents Neil Patrick Harris and Jayma Mays. Not the greatest movie we ever saw, but Smurfy enough to enjoy.

WHAT DO YOU SAY TO A NAKED LADY?

Those of a certain age will immediately recognize this as the moment when America lost its innocence. Allen Funt hosted one of the first reality shows, “Candid Camera.” The premise: Set up a camera and watch people deal with exaggerated everyday annoyances. It was part and parcel of American culture until lawyers began demanding ever more restricted legal clearances from those “punked.” So Funt decided to take his shtick to the theaters, filming comic overreaction to unexpected (and innocent) public nudity. While funny, it destroyed his career, and with it, a social institution. New to DVD.

A hilarious look at the annual Petaluma, Calif., World’s Ugliest Dog competition. Truly heartwarming as the owners — who, yes, often resemble their unfortunate pets — bestow unrestrained love, affection and devotion on animals who, if there is a God, will never be allowed to breed. Love is said to be more than skin deep, but ugly, apparently, isn’t far behind.