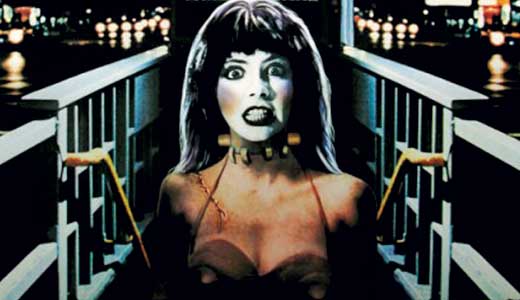 The low-budget horror genre had seen the Frankenstein tale retold just about every way imaginable, but it took the father of “Basket Case” (1982) to truly bring it back to life. Frank Henenlotter wrote and directed this gory comic tale of a woman, chopped into easily manageable bits by a lawn mower, reassembled — with occasional prostitute spare parts — by her loving fiancé. The result? One of the funniest, bloodiest tales of a killer-babe ever lensed. Now available on Blu-ray with terrific extras. Recommended.

Let’s face it, the body-swap comedy had been done to death, so why make another one? Because no one had ever made a filthy one before! Jason Bateman and Ryan Reynolds are having the times of their lives as the two buds — one married with kids and the other a sexually active single — who magically swap brains. Leslie Mann deserves special kudos as Bateman’s brilliant (and damn hot) wife, who gamely rides this sleaze-train right down the toilet. Olivia Wilde is delicious as always, and Alan Arkin nearly steals the movie as Reynolds’ dad. Hilariously raunchy.

It’s a savage tale of suspense, action and suicide-for-pay when a young man enters the deadly world of Russian Roulette in hopes of a $2 million payoff. Actually, this is a cheezy remake of the excellent “13 Tzameti“ with lots of bankable cameos by Jason Statham, Alexander Skarsgård, Emmanuelle Chriqui, Mickey Rourke, 50 Cent, Ray Winstone and others.

Now on Blu-ray, the classic American love story: Nice young man meets pretty young girl. He gives her dad a severed human ear. Nice young man meets another pretty young girl, only she’s not so nice and loves to be spanked. They all meet Dennis Hopper, who isn’t nice at all. In fact, he may be the sickest bastard that ever lived. And his character is a bad boy, too. Directed by David Lynch, with Kyle MacLachlan, Isabella Rossellini, Laura Dern, Hope Lange and Dean Stockwell.

Brooklynite James Russo saw his mother brutally murdered as a child and now prowls the streets at night — a brutal vigilante in hopes of finding her killer. A pair of detectives (with great comic banter) is on his trail: Is he a force for good or evil?

A surprisingly good — and very original — holiday film for the whole family. A pretty woman with a secret works at the post office answering Santa’s mail. She attracts the attention of a handsome, if unhappy, postal carrier, and from their romance comes a renewed belief in the magic of Christmas. Corny? You betcha! But never clingy. We liked it.

A look at the work of Dr. Alexander Sasha who invented the drug Ecstasy — as well as more than 200 other psychedelics — at a makeshift lab in his northern California home. This doc explores the problem of psychotropic drug abuse and what such drugs have taught us about the human brain.

Man is the least-armed creature in the animal kingdom, easily killed — and eaten! — by animals a fraction of our size. So why do we consider ourselves the dominant species? Technology and tenacity seem to be two key elements, both of which are heralded in this educational/survival offering from the Discovery Channel.

The late overwrought acting genius and total nut-job Klaus Kinski considered himself to be the virtual reincarnation of profane 19th century “devil violinist” Niccolo Paganini. To that end, he created this infamous train wreck of a movie — if a movie it is! More a twisted, psychomorphic collection of visual and audio snippets growing straight from Kinski’s tortured mind and taking root within the camera. You won’t like this film — no one has ever liked this film — but it is a uniquely singular and insanely personal look at the everyday madness around us.

NOT ANOTHER B MOVIE

Smiley is that rarest of modern comics: His humor is clean and funny! In this stand-up special, he displays amazing charm and style, while still making you wet yourself. Repeatedly. We gotta buy a new couch …

According to this HBO documentary, America is overrun — nay, infested — with caped and masked would-be crimebusters who patrol the streets, risking their lives to help others. Are they truly possessed of superior moral, intellectual and physical prowess to make them worthy of our admiration? Or are they deluded nut-jobs who pose a danger to themselves and others? Well, duhhh.

This music-industry potboiler starring Kevin Zegers and Jason Ritter is fairly interesting as the two try to rekindle their lost music-writing partnership — but the distractions are even better! What distractions? How about Taryn Manning, Lauren Holly, Kelly Lynch, Aimee Teegarden, Eileen Alana, Angelina Aucello and Brooke Bickord — some of the damn-finest looking women we ever saw! Seriously, dude, you gotta check this out.

This no-budget indie horror inspired by “The Ruins” plops a group of too-attractive students in swampland that was once the site of Native American criminal executions. Say, you don’t imagine these kids are going to run afoul of any malevolent spirits, do you? Fun.

A holdover from the blessedly short-lived video-self-improvement phenomena wherein successful professional and college sports figures bring their years of experience blowing whistles and yelling at people to your home to help you, too, be a successful multi-zillionaire asshole. This one features Rex Ryan, Sean Payton and Mike Ditka from the NFL.