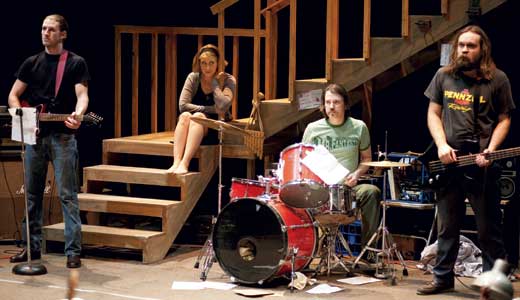 Theater may be the last hope for literacy in America. Not the splashy “Disney on Stage” sort of theater that moves from town to town in fleets of semis, but the little productions put on by smart, regional companies like Theatre 502, which ends its first season this weekend with a superb production of Marco Ramirez’s “Broadsword: A Heavy Metal Play.”

First, let’s talk about the subtitle: “A Heavy Metal Play.” It’s one of those misleading titles that can confound and deter potential audiences (sort of like “Buffy The Vampire Slayer,” a title that probably kept millions from watching one of the best TV series of the last 20 years). But the worst mistake a theater lover could make this season would be to miss “Broadsword,” which offers some of the best writing and finest performances seen on any Louisville stage this season. It’s not that the subtitle isn’t accurate: “Broadsword” is indeed about people who once, years ago, were perched on the cusp of heavy metal stardom. And there are occasional bursts of rock music during the play. But guitars, amps and power chords are to “Broadsword” as, say, an upright piano is to August Wilson’s masterpiece, “The Piano Lesson.”

And the reference is intentional: Like Wilson, Ramirez (who is known to Louisville audiences as the award-winning author of two Humana Fest 10-minute plays, and now writes for the FX series “Sons of Anarchy”) is a writer who grapples with passion, loyalty, art and temptation. He asks questions that can only be answered with the articulate, irrational, explosive magic that nowadays can only be found in live theater — and then only when excellent casts and companies come together around excellent material — as has happened here.

Years ago, the band called Broadsword scratched the door of greatness — and not mere commercial success. Rather their leader, Richie, came so close to uncovering secret chords and melodies — the very stuff of myth — that a mysterious Man in White (Robert McFarland) broke the band up by offering Richie’s brother Tony (Michael Mayes) a Faustian bargain calculated to destroy and distract the other members, Vic (Brandon Cox) and Nicky (Scott Anthony), and the band’s loving fan, Becca (Cara Hicks). In subsequent years, Richie continued his musical investigations and started corresponding with Doctor Thorne (Tom Luce), a scholar equally obsessed with dangerously esoteric music.

Now Richie has disappeared under mysterious circumstances, and everyone has assembled in his grungy, rock ’n’ roll basement (nicely realized by scenic designer Karl Anderson, who has taken good advantage of an excellent new venue at Iroquois Park) in a tense gathering where long-held grudges and slights come to the surface. And eventually they come to realize that Richie’s disappearance may have something to do with his last composition, a trio written in a strange notation that only the remaining members of Broadsword can play — if they dare.

Along the way, director Amy Attaway’s cast delivers stunning soliloquies and sharp exchanges about the lure and power of music and fame, and the bruising nature of failure. McFarland begins the night with a perfectly pitched monologue, delivering his agent’s sales pitch with an easy authority rendered all the more sinister by virtue of its cool understatement. Cox and Anthony bring resigned anger to their roles as failures who once glimpsed greatness on the horizon. Mayes has the sleek, bright-eyed look of a rock star vocalist who has swapped his soul for an empty promise. Luce is appropriately scholarly as a musicologist with strange stories to tell. And Hicks — the band’s former groupie, who still nurtures a love for the band, its members and what it once stood for — has one of the play’s great moments when she describes the excitement generated by the sound of a humming amplifier.