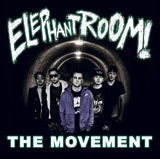 Rap-rock has only been done well a couple times: Run-DMC, Rage’s debut, the “Judgment Night” soundtrack. That’s about it. Elephant Room is on the same roster as the Villebillies, a fitting pairing. Elephant Room’s debut is a freebie, serving to whet your appetite for the official disc, going on sale later this year. The Movement bounces between club synths, rock guitars and b-boy breakbeats. “I’m Ill” deserves the most repeat plays, the only rap song you’ll hear all year referencing Pelosi, Reagan and Palin — without a political bent. “Speakers” has a nasty 808 beat behind it, a guilty pleasure song that sounds not unlike a Nelly single. Album closer “Do It Like I’m Bad” crunches its rock guitars while trading bars back and forth like their Adidas-clad predecessors. The MCs’ voices are of the love-or-hate variety, high-pitched and a bit nasal. If their flows weren’t as nimble as they are, and their live show not as compelling and energetic as it is, this Movement would stall before it even started.