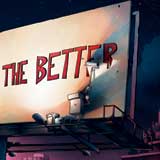 The title to Shadow’s latest holds a double meaning. While in interviews he says that it’s a reaction to the overwhelming amount of information available via digital mediums and “over-stimulus,” an interesting take on a world where news media is so controlled by threat of access, it also serves as a call to fans of his early catalog that he perceives this as a fresh start, the beginning of a new artistic career. It’s understandable to be frustrated when your entire existence is held to the standard and sound of your debut, in this case the outstanding Endtroducing …, and Shadow has squirmed uncomfortably ever since. After 2006’s fan-shedding The Outsider, Less is a damn site more listenable, easing back toward layered (if leaner) instrumental offerings. “Enemy Lines” and “Redeemed” are as good as anything in his oeuvre outside of “What Does Your Soul Look Like.” A couple vocal cuts sully, though the Yukimi Nagano track “Scale It Back” is excellent. Adjust your expectations and take this on without baggage: There’s some worthy material here.