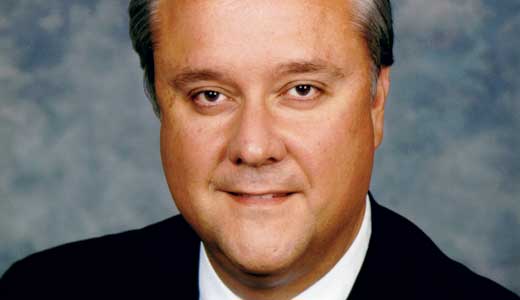 Just three weeks shy of Election Day, David Williams visited Portland Christian School in Louisville to rally the Republican faithful and energize them for the important days ahead in the gubernatorial campaign.

But these haven’t been very inspiring times for Williams, and this rally — aptly named a “revival,” since most have written off his campaign as dead — reflected that.

As he stood at the pulpit in front of the quiet crowd of 25 in church pews, this seemed less like a campaign rally and more like his own political wake.

He spoke to the crowd in an uncharacteristically subdued manner for 18 minutes before he received his first (and only) applause line. After a few more minutes, Williams announced that he had to hit the road for the next campaign stop, and was given polite applause as he headed for the door.

I caught up with Williams outside to ask him some questions.

It was announced earlier in the day that former New York City Mayor Rudy Giuliani would be traveling to Kentucky to campaign for Todd P’Pool, the Republican attorney general candidate who is doing his own separate tour across the state — where you won’t hear the name of the man at the top of the ticket whom many see as dragging down the rest of the Republican candidates.

I asked Williams if Giuliani would also do a campaign event for him.

“I didn’t know he was coming,” Williams said flatly.

Before I could get my next question out, Williams said with a crooked smile: “I would doubt that he’d come campaign for me.”

The packed house of about 100 — who had been waiting patiently for an hour and a half — burst into applause as Todd P’Pool and Rudy Giuliani walked into the Crowne Plaza Hotel ballroom.

The event was full of red meat that the crowd ate up, as Giuliani aggressively pushed the talking points of the campaign, saying P’Pool needed to defeat Jack Conway so that he could devote the time and energy of the attorney general’s office to fighting Obama’s health care law and the EPA.

There would be zero mention of David Williams, as was the case at the previous week’s “Corn and Coal” tour stop in Louisville — the offshoot campaign effort of P’Pool and commissioner of agriculture candidate Jamie Comer, both seen as the only two potential bright spots for Republicans on Election Day.

Several people were overheard lamenting the fact that P’Pool’s chances would be much greater if it wasn’t for the guy at the top of the ticket. A week prior, yet another poll was released (by cn|2) showing Williams trailing Gov. Steve Beshear by nearly 30 percent, a fate that is hard to avoid for a candidate like Williams who is outraised and outspent by five times. Though P’Pool’s campaign manager, David Ray, says their internal polling shows P’Pool only behind by single-digits and “closing fast,” the cn|2 poll also showed him down by 30 percent.

This is certainly a turn of events over the span of one year. Republicans dominated in Kentucky last year, as they gained seats in the state House and Senate, saw Rand Paul easily win his Senate race, and almost knocked off the once-untouchable Rep. Ben Chandler in the 6th district. But now they face the distinct possibility of being swept in all six statewide races, with the biggest humiliation happening at the top of the ticket.

It’s difficult to pinpoint exactly where things started to turn for the worse. Williams has continued to have a rough relationship with the Tea Party base — whose primary candidate, Phil Moffett, surprisingly came within 10 percent of Williams, despite having no television ads. Williams also has had the “Bully from Burkesville” label applied to him for many years, as his abrasive rhetoric and political maneuvering as president of the state Senate over the past decade has won him many legislative victories, but even more enemies.

For three years, Beshear and Williams were the biggest adversaries in Frankfort, and Williams seemed to be winning. Channeling his political mentor Mitch McConnell, he was able to block the Democrats’ legislation in the state Senate, bringing government to a grinding halt. But that seemed to finally backfire this spring, when the entire Republican House delegation signed a letter of opposition to Williams’ demands that education face a budget cut to pay for Medicaid. The Democrats wound up winning, and Williams’ fortunes have continued to slide downhill since.

Two of Williams’ campaign managers would resign, as the polls showed Williams’ margin of defeat getting wider and wider with each poll. The ultimate outcome on Election Day is inevitable, and it won’t be pretty.

State Sen. Kathy Stein of Lexington, perhaps the most liberal legislator in Frankfort who has constantly butted heads with Williams, says she almost felt sorry for Williams earlier this year. But not anymore.

“Since then, I’ve realized that I would have been mistaken by feeling sorry for him because he has continued to say the mean and ugly things that he has since 2000,” Stein says. “But thank goodness Kentucky voters are recognizing that’s he’s just bad news. He’s completely bad news.”

The biggest question for Williams is not whether he can win the race for governor, but rather, if he loses by a wide enough margin, will Republicans replace him as state Senate leader given a 30 percent loss could make him politically toxic?

“I hope to goodness that members of the Senate Republican Caucus wake up and recognize that President Williams has done nothing but harm their causes,” Stein says.

I reluctantly asked Williams — as I already felt a little sorry for him — about the Teddy Roosevelt quote at the end of his full-color, 11-page jobs plan. The plan, proposing regressive taxation and cutting environmental regulations, seemed antithetical to the trust-busting conservationist leader of the progressive movement.

The quote reads: “It is not the critic who counts: not the man who points out how the strong man stumbles or where the doer of deeds could have done better. The credit belongs to the man who is actually in the arena, whose face is marred by dust and sweat and blood, who strives valiantly, who errs and comes up short again and again, because there is no effort without error or shortcoming…”

It seemed to be not just a criticism of Beshear — who avoided debates and didn’t campaign on much of an agenda — but a foreshadowing of Williams’ loss.

“Well, I think he was in the arena,” Williams said, suggesting that while Roosevelt was at least willing to defend his ideas, Beshear has been noticeably absent from the campaign trail. “And that’s the reason I used Teddy Roosevelt. He wasn’t always popular. You remember he went up or down, but he was a strong individual who appreciated worthy adversaries who got in and had ideas, and that’s what I admire about him…

“And I’m sure Teddy Roosevelt would like me. Everybody does,” he said as he let out a self-deprecating laugh.