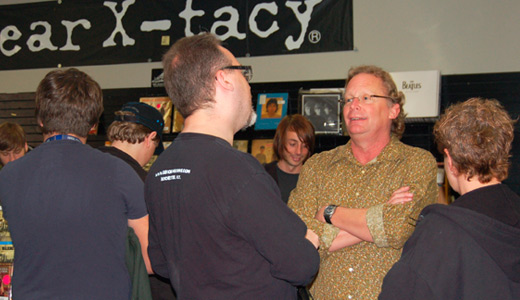 Instead, he’s posted up in the jazz section, chatting with customers eager to share personal anecdotes about Louisville’s iconic independent record store.

“So many people are telling me stories and sharing their memories. One guy told me he met his wife here 20 years ago,” Timmons says. “It wasn’t until I pulled the plug that I realized what this store meant to so many. And to me.”

Late last month, ear X-tacy failed to open for business one Saturday morning and remained inexplicably closed throughout the weekend. On Monday, Oct. 31, Timmons issued an emotional statement announcing that after 26 years, “ear X-tacy is no more.”

But on this Saturday afternoon, the store is open and jam-packed with customers as part of a two-day liquidation sale.

The record store had been in financial trouble for several years, in large part due to the rise of big-box retailers and the increasing popularity of digital downloads, which resulted in lagging sales and, ultimately, insurmountable debt. Timmons acknowledges he owes numerous creditors, which is one reason the store was re-opened for a final sale.

The other reason: to give customers an opportunity to visit ear X-tacy one last time.

“It’s nice to have this chance to say goodbye,” says Rob Seng, standing in a slow-moving checkout line that snakes through the store. The Trinity High School English teacher has been shopping at ear X-tacy since the week it opened in its original 500-square-foot location on Poplar Level Road. “I walked out of the store that day with a stack of records,” including the latest from the new wave band The Producers. “Since then, I’ve come in about once a week. I didn’t always buy, but it was like a ritual for me.”

Hundreds of customers are lined up outside at both the front and back entrances to Douglas Loop Station. Throughout most of the day, the wait just to get in the door exceeds an hour. Wearing a lanyard with a large white “X” draped over a red-and-black plaid flannel shirt, ear X-tacy event coordinator/marketing manager Sean Bailey lets in 10 at a time as space becomes available. He makes small talk with customers as they wait and repeatedly thanks them for their patience.

The store is operating at maximum capacity, with hordes of shoppers weaving through cramped aisles and collecting armfuls of CDs, records, posters, stickers, coffee mugs — even signage and fixtures are for sale.

Employee Nick Peay fields a steady stream of questions: How much for the CD racks? Are the genre signs for sale? Will the price of merchandise be slashed tomorrow?

A longtime patron of ear X-tacy, Peay landed his “dream job” at the store several months ago. As swarms of shoppers circle, he admits it’s tough not to be bothered by the fact that it took the store closing to spark such a swell of support.

“I’ve heard so many people say they’re sad and angry and frustrated. But the thing is, we’ve been here all along, and all these same things have been on the shelves,” he says. “Where were they a couple months ago? There’s just been a lack of consistent support from the community for a while now.”

In fact, Peay says there were days when no more than a dozen customers would visit the store.

When asked how he feels about the overwhelming response to the news of ear X-tacy closing, Timmons gives a half-hearted smile and says, “Do you want the pessimistic or the positive answer? I mean, it’s great that so many people came out today. Had no one shown up, that would have been a bad way to go out. But yeah, it’s bittersweet.”

It was February 2010 when John Timmons first sounded the alarm that ear X-tacy was in trouble.

During a press conference aimed at attracting more business to the struggling store, Timmons said, “If the public wants it to be here, they should support it.” Among those in attendance were My Morning Jacket’s Jim James, who suggested making the record store more of a multi-purpose destination, and Gill Holland, owner of sonaBLAST! Records and the Green Building, who proposed expanding ear X-tacy’s role as a local music venue, or perhaps seeking nonprofit status.

But ear X-tacy stayed the course and kept its focus on selling music — the tangible kind, with album covers and liner notes. (Although the Coalition of Independent Music Stores, to which ear X-tacy belonged, launched the digital distributor Think Indie in 2009, the site never took off and has since shut down.)

A bump in sales followed the press conference, but it was short-lived. In May 2010, Timmons announced he could no longer afford the store’s sprawling digs in the busy retail corridor along the 1500 block of Bardstown Road. The store relocated a mile and a half south to Douglas Loop, a move that further decimated sales.

Desperate, Timmons made another public plea, this time via a YouTube video. The appeal was not well received, drawing criticism from those who blamed Timmons for refusing to adapt his business in an evolving music industry.

In a November 2010 interview with LEO Weekly, Timmons said sales dropped 35-50 percent after moving to Douglas Loop. “If we can regain the business that we were doing at the old location, we’d be fine within a year, in my estimation,” he said at the time. “It’s not a goal that can’t be reached.”

Though last month’s decision to shutter ear X-tacy’s doors seemed rash, in reality, this fate had been on the horizon for years.

In response to news that ear X-tacy was closing, devoted customers planned a candlelight vigil outside the store on a cool November evening. Naysayers scoffed at the fact that such dramatic homage was being paid to a failing record store — after all, businesses come and go, and 26 years is a long run.

A few dozen people gathered in the parking lot to share memories of the store. Among them was John Timmons, who, other than releasing a written statement about the closure, had been noticeably silent and unreachable throughout the previous week. Dressed in familiar attire — a hooded black ear X-tacy sweatshirt and faded jeans — he hugged a few friends and employees before addressing the crowd.

“The hardest thing for me to do was let this go,” he said, momentarily breaking down in tears. “For 26 years, I’ve been able to live my passion.”

He referred to the store as the child he never had. He also urged those gathered to patronize the city’s remaining independent record stores — Better Days, Underground Sounds, The Great Escape — and warned that without unique local businesses, Louisville will become “Anyplace, USA.”

“There’s an experience to actually owning something other than a digital file,” Timmons said, adding that, “What made ear X-tacy great was the fact that the employees were passionate about music.”

A few weeks later, during ear X-tacy’s final sale, Timmons echoes these remarks, albeit with a slightly more positive outlook. A couple people have told him they are planning to open record stores in the wake of ear X-tacy’s demise, and he welcomes that, joking, “I’m going to need a place to buy records now.”

Career-wise, he is uncertain where to go from here. “I plan to take a little time off. Play music. Listen to music for a change, without having to stress about money and debt and all that stuff. The hard part is over.”