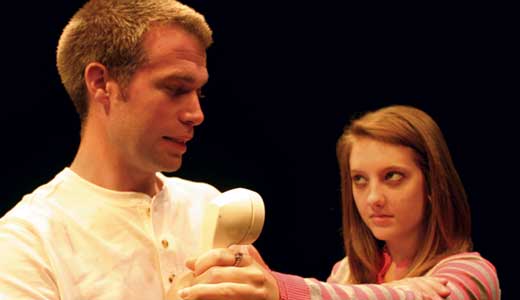 Sick of Christmas celebrations starting before you’ve polished off your last handful of dusty, orange-and-black-wrapped peanut butter chews? As Santa Claus once said, “If you can’t beat ’em, join ’em.” Le Petomane takes the joke one step further with “A Very Special Holiday Special,” an original production written, directed and performed by the six members of this mad genius ensemble. Expect original songs (and ukulele!), absurd action, literate jokes, the requisite, heart-warming seasonal message of love, and (if advance intelligence is to be believed) a giant atomic city-crushing beast. It ain’t Tiny Tim, folks, but this holiday spectacular closes before he’s even a glimmer in Bob Cratchit’s eye. There’s a bonus short play, “En Route,” included, so don’t show up late. —Erin Keane

Fear not — this production does not dramatize the impending season of sneezing doom. Set in a psychiatric retreat center where the patients might be far less loony than their caretakers, Will Eno’s 2004 Oppenheimer Award-winning play is a dark comedy that takes itself apart with the commentary offered by the characters of “Prologue” and “Epilogue,” while tracing two different love stories. “Not so much a play-within-a-play as a play-about-the-state-of-being-a-play, ‘The Flu Season’ will bring lots of surprises to the audience as it is rewritten while they watch,” says director James Tompkins. If you go, keep your eyes peeled for a newsworthy guest star. If you’re a U of L student or employee, feel free to hit up Campus Heath Services for a free flu shot just in case. —Jane Mattingly

Anthony Hamilton makes music that is timeless. His voice is equal parts Bobby Womack and Bill Withers — an incredible stew, especially during this abysmal period of modern R&B. He’s had to fight a bit in recent years, working with a record label that only knows how to sell to teenagers (which label doesn’t?), slowing down his output to a trickle. The scale may be tipping, though. He’s just released a free EP of material, Soul, an odds and sods collection of random tracks recorded the last couple years, and promises a new LP, Back To Love, in December. Why someone of his talent and skill set can be left to spoil on a roster’s bench is indicative of the general failure of this business to market to grown folks. —Damien McPherson

There are some young adults in these here parts who play music, sometimes even loudly, yet who offer it in praise to their creator, not merely in exchange for booze, babes and bucks. Is it fun? Depends on your definition of what “is” is, naturally. For many, it’s an ecstatic release of belief and emotion; for others, well … it’s not the kind of celebration one stumbles upon by accident. The 930 is a perfect host, in fact, for this double release party for Brooks Ritter and Dave Moisan; guitarist Ritter serves as a music director for Sojourn, where guitarist-keyboardist Moisan is also involved with music. Ritter’s new album is called Gather Round, and Moisan’s is Ungravity, and both will be playing with full bands. Both offer a hearty, soulful sound lacking in most singer-songwriter ventures, sounding older than their years. —Peter Berkowitz

For a half-century, the relationship between music and visual art was rich and rewarding. Imagine some of your favorite album art, live set designs, iconic photographs or innovative music videos, and then consider iTunes and Snooki. For this local LOT exhibition, Drinking Woman Heather Cantrell and Wax Fang’s Jacob Heustis are among the artists contributing, and Letitia Quesenberry is collaborating with musical act Peaking Lights on a “Sound Garden” (think Japanese rock garden, not grunge). Heustis’ piece is an interactive recording booth, and Cantrell’s city-specific “Study in Portraiture” focuses on Louisville’s music history. (She has previously done versions in New York, Los Angeles and London). Leslie Lyons contributes photographs inspired by David Bowie’s “Who Can I Be Now?” and the HIRSUTA design firm will recontextualize what is possibly Louisville’s greatest contribution to music and art — production of the disco ball. —Peter Berkowitz

‘The Marriage of Figaro’

Mozart’s “The Marriage of Figaro” is also known as “The Crazy Day” — what an understatement. Deceptions, revenge and wandering eyes are just part of this 18th century screwball comedic opera. The valet Figaro is set to marry fellow servant Susanna, both employed by the Count and Countess Almaviva at their estate near Seville, Spain. Because the aristocracy comes off looking like fools, none other than Louisville’s namesake monarch Louis XVI banned it, calling it “detestable.” The last time the Kentucky Opera performed “Figaro” was in 2002. With new costumes and sets by local builder Eric Allgeier, Mozart’s opera comes off with just the right amount of notes. —Jo Anne Triplett

Two centuries ago, Gen. William Lytle — founder of Cincinnati — sent one of his minions south to survey a swath of land on the Falls of the Ohio. With steamboat travel and maritime trade booming, it was an ideal location for a new settlement, and so the town of Portland was born. This month marks Portland’s bicentennial, which is being celebrated with a good old-fashioned Founder’s Day shindig. There will be traditional food from the time period and 19th century games (not sure what either entails, but sounds like fun!), as well as live music, horse-drawn carriage rides, tours and a brief address from a local historian. Parking is available near 31st Street and Northwestern Parkway, and pedestrian access to the event is available via the RiverWalk path, with transportation provided for those unable to make the trek. —Sarah Kelley

Conrad Tao appears Sunday at Comstock Hall in the opening event of the Speed Museum’s Hattie Bishop Speed Concert Series. A 17-year-old from Urbana, Ill., and a student at Columbia University/Juilliard, Tao has appeared with the Philadelphia Orchestra and on the PBS series “From the Top,” which showcases young musical talent. He’s also captured the ASCAP Morton Gould Young Composer Award eight times, and three of his songs appear on the program, along with works by Bach, Beethoven, Stravinsky and Liszt. Today’s young artists fly over the keyboard, but Tao seems to have a sense of rhythm in his fingers, able to enunciate the music as he speeds through fast passages. —Bill Doolittle

“Fall Into Art” this year falls into the past, with photographs taken by Capt. Jim Howard, the last owner of the famous steamboat-building Howard Shipyards. Howard began photographing the activities in the shipyard when he was a teenager, and he had a keen eye for light and composition. He set up a darkroom on the third floor of the mansion and developed his own glass plate negatives. A 1971 fire destroyed much of his massive collection, but more than 1,500 photos survived and were carefully cleaned by a team of volunteers supervised by Louisville photographer Lin Caufield. Photos from this collection, now on loan to U of L, will be the main focus of “Fall Into Art.” Also, on Nov. 20, Paul Paletti, owner of Paul Paletti Gallery, will do a presentation called “Processes and Collecting.” —Kevin Gibson

“A Christmas Story” is that movie — you either love it or it annoys the living hell out of you. If you love it, you are like a friend of mine who proudly displays a leg lamp complete with fishnet stocking. This is the third year Louisville gets to relive childhood moments that scarred us for life as we cringe at the thought of another holiday spent with extended family. With enough therapy, hopefully we moved past the triple-dog dares and can smile politely when the Aunt Claras of the world give gifts — although in reality, we want to shoot someone with a BB gun, even if it puts an eye out. Dress in a pink bunny suit, put a bar of soap in your mouth, and celebrate Christmas in style. Extra credit for licking a flagpole. —Allison Ray

Zenyatta stands more than 17 hands tall (in people-talk, that’s about 5 feet, 9 inches). That’s one impressive horse. Her owners Ann and Jerry Moss commissioned Jaime Corum to do a life-size rendering for this year’s Breeders’ Cup. The result is an even more impressive painting. “It is a fabulous likeness,” stable manager Dottie Shirreffs says. “Jaime perfectly captures Zenyatta’s beauty, power and personality.” It naturally dominates the exhibition, even among Corum’s other excellent equine works.

“At the ‘Le Coeur du Cheval (The Heart of the Horse),’ my new work seeks to get ever closer to the heart of the horse,” Corum says. “The magnificent Zenyatta, for example, can go from fierce racing machine to a gentle giant nuzzling her adoring fans in an instant.” Posters and prints are available at www.zenyattashop.com. —Jo Anne Triplett