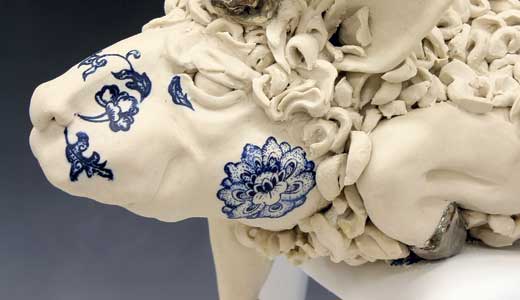 This benefit for Dare to Care’s food-raiser program collects canned goods and frozen turkeys for those in need, so thank Yum! Brands and WFPK for making it happen. As entertainment, Joseph Arthur has replaced the previously announced Burlap to Cashmere on this night of giving and adult album alternative music, but Ponderosa is still on the bill. Georgia’s Ponderosa — meaning “ponderous” or “heavy” in its Latin original — are coming off a series of dates with dinosaur supergroup Chickenfoot, so don’t be surprised if they need time to readjust to playing for music fans (instead of a stadium filled with Hagar fans waiting for “I Can’t Drive 55”). Peter Gabriel protégé and Pearl Jam buddy Arthur, an Akron native, is a more than worthy replacement for the Burlaps, as his well-crafted songs should balance out nicely with Ponderosa’s stomp. —Peter Berkowitz

Cesar Padilla is a true renaissance man of the underground; a filmmaker, musician, writer and vintage clothing archivist whose book on classic rock T-shirts, “Ripped,” was published recently by Universe. The one-time Louisvillian returns to town Friday to present an hour of his short films, which will be followed by a musical set from his band Ritchie White Orchestra. A “loop show” in 16mm film by cinemanonymous will accompany the performance. As we learned from an interview in The Paper, Padilla’s work first came to the attention of Louisville Film Society director Ryan Daly when he discovered several discarded outtakes on the floor of an old office in the downtown library. This was most fortuitous for Daly, himself a “found footage” artist. —J. Christian Walsh

After a long day of Black Friday shopping for stupid gifts — or after a nice, relaxing day of sitting around, watching a “SpongeBob” marathon — why don’t we all throw on our most “with it” fashion statements and meet up at the bar for some fusion jazz, cool, baby? Z-bar co-owner Antz Wetting has been hoping to have a musical night with one of Louisville’s most popular and acclaimed bandleaders, Dick Sisto, at his place; now the beloved vibes man is taking this special night off from his usual Friday gig at the Seelbach bar to stretch out with longtime collaborators Jason Tiemann (drums) and Ty Wheeler (bass). Over their two sets, Sisto expects the trio will play songs by Miles, Monk, Jaco and the Beatles, as well as originals. —Peter Berkowitz

With three shows opening during the Nov. 25 FAT Friday Trolley Hop, the Mellwood Arts & Entertainment Center is the place to be. Audience participation is requested in “Places and Spaces Tucked Away.” Part of a larger project, this exhibition by Ashley Brossart asks that you follow the instructions posted in the Bridge Gallery as a way to connect to our city. The Pigment Gallery is showing “Reflecting On People and Places in My Life.” Frederica Diane Huff says, “I can clearly imagine my life as a landscape … collecting experiences and images that inform my art.” “Ode to Woman: The Poetics of Movement” in Gallery M features art inspired by Asian Sumi-e. “The brush moves almost automatically,” says André Foreman. “There is no conscious thought, only the absorption of creativity.” —Jo Anne Triplett

Let’s face it, Black Friday is a hassle. Why not spend your hard-earned cash on Small Business Saturday instead? This year, a group of Kentucky potters are coordinating their annual sale with a day dedicated to shopping small and local. Featuring both functional and sculptural pieces by a range of artists, you’re liable to find both ceramics for your home and gifts for a few friends on your list. The group LOCALS (Living On Clay And Louisville Soil) have grown this sale out of a living room and into a recurring holiday event. Expect to find the ceramics of Laura Ross, Wayne Ferguson, Davie Reneau, Suzy Hatcher, Amy Elswick, J.D. Schall, Matt Gaddie and more. And if that isn’t enough to seduce you, there will be coffee and cookies, too. —Mali Anderson

New Albany is in the holiday mood. Their Holiday Fest includes a Trolley Hop that will take visitors around town, including a stop at the Arts Council of Southern Indiana, where they’re knee-deep in clay. Warren and Julie Payne will be there signing their book “Clear as Mud: Early 20th Century Kentucky Art Pottery,” plus IUS art students will be selling their ceramics. Kristy Leverock, also from IUS, will have the opening reception for her show “A Delicate Conversation” beginning at 6 p.m. (it runs through Jan. 13). Keep an eye on her — she recently won a fellowship from the National Council on Education in Ceramic Arts. If clay doesn’t wet your whistle, bourbon might, with a free bourbon tasting from 5-7 p.m. —Jo Anne Triplett

Did you know Crescent Hill Radio (1650-AM) plays only local and regional music with no commercials, and they’re always looking for new music from local bands to put in the rotation? Did you even know Crescent Hill Radio existed? If you haven’t tuned in, you have a treat in store. There’s the heavy metal hour, punk hour and blues hour. There’s “HippyHead’s Spotlight,” which features interviews with local musicians and creative types. There’s “From the Inkwell” run by Sheri Wright, who covers the local literary scene by inviting on poets, authors, etc., for an hour-long discussion. Saturday’s benefit show for the radio station includes six bands (Denny Wheatley with Mickey Clark; Kri & Hettie; Several Hundred People; The Stella Vees; Daphne Luster & the Luminaries; and Soul Circus) and food provided by J. Gumbo’s. —Sara Havens

I like good music, a good cause and a weird place to have an adventure, so here’s an event for Louisville weirdos like me: The Holiday Inn on Hurstbourne hosts this second annual Bluegrass Anonymous holiday concert and jam session, featuring world-class musicians like Michael Cleveland, a nine-time IBMA Fiddle Player of the Year winner, in addition to 9-year-old mandolin protégé Kyle Ramey, Lexington’s Newtown and locals Storefront Congregation. Last year’s event collected truckloads of toys for kids, as well as some necessary cash for the Salvation Army, Center for Women and Families, and Home of the Innocents. Everyone from the hotel to the bands, crews and vendors are volunteering their time and money. And did I mention the jamz? Doors open at 3, though the scheduled music doesn’t begin until 5:30. Admission is a new toy and/or whatever cash you can give. —Peter Berkowitz

The end is nigh, fellow travelers. If anyone is left wondering whether ear X-tacy’s recent closure was a mere hiccup before the store returned like a phoenix … there’s this: For two abbreviated days, “everything will be sold,” according to the store. This is also the last chance to redeem gift cards and gift certificates, so get on that with the quickness. Credit cards can be used for purchases (as well as cash), so if you’ve been hoping to buy that William Hung CD, this is your chance. Note the store will only be open from noon to 5 p.m. both days, not (what once were) usual hours. At press time, discount amounts had not been announced, but we’re hoping for a 99-percent discount on everything — for isn’t it we, the 99 percent, who suffer when a local business is done in by the economy and giant corporations? —Peter Berkowitz

We apparently live in a nation of masochistic (albeit thrifty) consumers: Last year, more than 212 million Americans braved crowds and, in some cases, bodily harm while shopping on Black Friday. At the end of the day, they spent approximately $45 billion, mostly on junk made in impoverished lands for pennies on the dollar. For locals looking for a merrier way to kick off the Christmas shopping season, Kin Ship Press and Please & Thank You are hosting a Cozy Holiday Commissary the Sunday after Thanksgiving. The event will offer locally made wares including art, toys, clothing, accessories and home goods, as well as tasty treats to nosh on while you shop. —Sarah Kelley

Every year, Actors Theatre of Louisville welcomes a new crop of apprentices and interns. You’ve seen them on stage as dancing elves and moving sets between scenes, or running through the lobby on some important mission before the show, but the A/I company takes center stage several times throughout the season. “Our Unspoken Word(s)” is the third installment in a series of workshop ensemble productions written and performed by the apprentices and interns. The seven acting apprentices behind “Our Unspoken Word(s),” which will explore an average day of a group of high school students dealing with issues like body image, sexuality, family troubles and more, call themselves R.A.W.R. (Raising Awareness, Writing Reality) and have incorporated the heightened language of poetry into the visceral immediacy of live theater. Sounds like the kids are all right. —Erin Keane

Over the past few years, the East Market Street district has transformed into an art gallery center. The culinary arts also call NuLu home, dishing up organic fare while moving toward sustainability. The transcendence of Market Street embraces the hip culture of Louisville yet pays homage to traditions and landmarks that made this area a center of commerce. Views of homes, churches and businesses from Butchertown to Phoenix Hill are forever frozen in time as Eric Phagan features “Views of Market Street.” “Torn surfaces create a timeworn, fatigued appearance that make an offering of the validations of age,” he says. The validation of our present by our past is as important as our future. Phagan presents his collection in The Yellow Room, juxtaposed with four artists, in easy-to-find rooms — just look for the colors. —Allison Ray