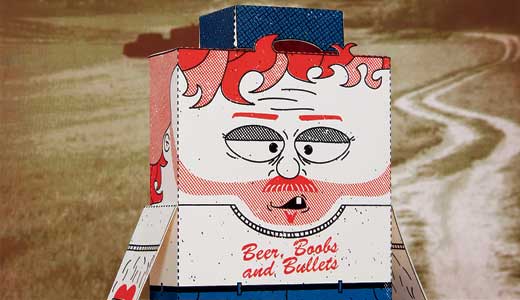 I imagine a world where Brian Regan (pronounced: REE’ gun) will have his own family sitcom called “Leave it to Regan” or “Regan Knows Best” or “My Two Regans.” But before he embarks on the illustrious television career of my dreams, you can see him Thursday at the Brown Theatre. Regan has established himself as one of the most respected comics on the scene, rocking theaters all over the country with his mix of wit and physicality. With a podcast, several albums, cable TV specials and a string of talk show appearances to his credit, Regan offers a stand-up show you definitely shouldn’t miss this week. —Brent Owen

By definition, dancers gotta dance. But without direction, they’re out there whirling their arms and legs around. That’s where the choreographer comes in. In the annual Choreographers’ Showcase, the audience has the opportunity to examine this collaboration with 13 new performances created for the dancers of the Louisville Ballet. This year is unusual in that most of the works are contemporary. Some of the choreographers are new to the game, like Rob Morrow, Ryan Stokes and Juanita Araque. Others are old favorites, such as Erica De La O (whose doing a baroque piece) and Benjamin Needham-Wood. This is dance up close and personal, in the studio of the Louisville Ballet itself. However tempting, just don’t get up and whirl around with them. —Jo Anne Triplett

It’s time again for the annual Art Auction. As Martha Stewart says, “It’s a good thing,” as it supports the Louisville Visual Art Association’s Children’s Fine Art Classes and the University of Louisville Hite Art Institute’s Mary Spencer Nay Scholarship. It starts off with the Preview Party on Thursday, Nov. 3, from 6-8 p.m. This is artist central, giving you a chance to put a face to the art. Look for works by Tom Pfannerstill, Amy Pender, Rodney Hatfield and Jeaneen Barnhart, just to name a few. The public exhibition is from Nov. 4-11. The actual Art Auction is Saturday, Nov. 12, from 6-9 p.m. with the 112 works divided into a live auction and silent auction. Tickets are $75 for LVAA member and $100 for non-members. —Jo Anne Triplett

More than 500 years ago, the Spaniards tried to convert people in what is now Mexico to Catholicism and abolish the Dias de los Muertos celebrations. Their efforts only made the tradition stronger, and the best the Conquistadors could muster was to celebrate Catholic Holy Days of Obligation on the same days. In modern times, the Mexican-influenced celebration of the dearly departed takes place across the United States and Mexico. Beautiful altars adorned with sugar skulls, treats and the favorite foods of the deceased celebrate their life and death. The Louisville version of Dia de los Muertos takes place with altars, music, food and drink at KMAC. Guests are encouraged to bring mementos of loved ones and wear masks or costumes — so you can get another evening’s wear from your Halloween costume. This date just happens to fall on the First Friday Trolley Hop — just in case you need a ride. —Allison Ray

Sharp tempo changes and good ol’ Midwestern weirdness are hallmarks of Reading Group. Last year, the pro-literacy punkers released a free EP on Bandcamp called Hugging Is Mandatory! Guitarists Paul Watkins and Paul Rushford, bassist Jamie Prott and drummer Chris Martin unleashed carefree punk jams while singer/accordion player Lacey Guthrie topped it off with vocals akin to a younger Florence Welch. A few weeks ago, Reading Group leaked a new song, “Master Blaster,” in anticipation of a new EP this winter. They’re joined Wednesday by Oakland group Big Kids, who, given last week’s Occupy fiasco in their hometown, should have plenty to discuss. This past summer the band dropped Phone Home, which leans toward punk’s grittier side without burying melodies you’ve come to expect from the West Coast. Their European tour blog is a must-read. —Mat Herron

In case you missed it, Queen City husband and wife team Linford Detweiler and Karin Bergquist showed they knew a thing or two about bridges and choruses by cutting their latest album, The Long Surrender, in a week with Grammy winner Joe Henry. Released this past January, the brisk recording session marked the band’s 20th year, and followed a recurring theme of not letting perfection get in the way of good storytelling. As Bergquist explains in their bio, “I think the title speaks to the arc of a lifelong commitment to writing and performing regardless of recognition.” Or who’s cutting the check. Surrender is a largely fan-funded release that arrived on the band’s own Great Speckled Dog Label. Lucy Wainwright Roche, daughter of Loudon Wainwright III and Suzzy Roche, opens. —Mat Herron

Too Old For Toys?

Remember the sheer joy you experienced upon getting your grubby little hands on the latest Transformer or My Little Pony? But then puberty kicked in, and suddenly your GI Joe collection was totally lame. Well it turns out you’re never too old for toys, as evidenced by the latest show from local artists Ron Jasin (LEO art director) and Mary Yates, the creative minds behind Madpixel Art and Design. Throughout November, the duo will feature new works at Ultra Pop — a veritable wonderland for kids at heart — including hand-printed paper toys and photo-based prints. And if the promise of toys doesn’t speak to your cold, adult heart, perhaps the promise of cake will appeal to your sweet tooth. It just so happens the artist couple shares a birthday, which will be celebrated with free cake during the show’s opening from 6-10 p.m. on Saturday, Nov. 5. —Sarah Kelley

This past summer, Louisville photographer Sarah Lyon took a post-Derby vacay to a middle-of-nowhere gem — Wendover City, Utah, where she checked out the Wendover Residence Program and wandered around brainstorming ideas for her application to the program. She brought her cameras for her own enjoyment and for data-collecting purposes, and hadn’t anticipated creating a show of her shots, but she eagerly put one together when the Salvo Collective gallery invited her to be a part of the Photo Biennial taking place this month. You may recognize Lyon’s name from seeing a show of hers around town, or from her “Female Mechanics” calendars. Her Wendover show comes down soon, so hurry up and see what Wild Western discoveries she made and captured. —Jane Mattingly

Jewish Festival of the Book

The Jewish Festival of the Book is again in full swing. As in previous years, the events are scattered over several weeks. Coming up, the Jewish Community Center will be the site for back-to-back evening reading-signings worth your consideration. Tuesday brings Melissa Faye Greene, whose “No Biking in the House Without a Helmet” chronicles an unusual expanding family. Greene and her husband adopted five children to re-fill their house at a time in life when many parents look forward to an empty nest. On the following night, Myla Goldberg, who first made her mark with the novel “Bee Season,” reads from her latest, “The False Friend.” This tale involves a woman recovering memories of earlier years — including the day when her best friend suddenly disappeared. Lisa Baron, author of “Life of the Party: A Political Press Tart Bares All,” reads tonight. Books will be available for sale at the center. —T.E. Lyons

While bartending with Stacey McDaniel at R Place Pub a few years ago, I learned to stay out of her way. She knew how to do the job and do it quickly and precisely. I was more of a leisure ’tender — sometimes talking more than selling. She ran laps around me — her register always reported twice as many sales as mine. Stacey was recently diagnosed with stage 3 Hodgkin’s lymphoma and is undergoing chemotherapy in New York. R Place is throwing a benefit party in her honor next Wednesday to help her with the medical bills and such. There will be a silent auction and live music by Dev & Doug, Robbie Bartlett and the Local Villains. Chad Guelda, R Place regular and lead singer of Local Villains, says there was no question on playing the benefit. “We are happy to play that date to help Stacey.” —Sara Havens

Most things are more fun with a friend, and longtime photo pals Chris Maynard and Bill Carner are having their first photography exhibition together, part of this year’s Photo Biennial. Maynard and Carner met as students at the Rhode Island School of Design in 1966, both shooting with Leicas and sharing a love of street photography, irony and humor. After college they went their separate ways — Maynard to The New York Times to shoot and edit, and Carner to the University of Louisville Photographic Archives for the last 33 years, working as a photo educator as well. After decades of fine-tuning their unique styles, the two are reunited and will be sharing their work from the last two centuries. —Jane Mattingly

As one of the last stops on the band’s 20th anniversary tour, the California Guitar Trio brings it to the Z-bar Tuesday. The King Crimson devotees are playing on the heels of their excellent Andromeda album, released on the local Karate Body Records. Typically, guitar groups like this fall more into the New Age category and fight insomnia; California Guitar Trio fights this stereotype by playing with a forcefulness and unfulfilled curiosity in their own notes that it’s impossible to be lulled. That half of the Andromeda album is improvisation only further solidifies the excitement. Outside of the title cut, the improv is the best material. Sure, other records have included covers from Pink Floyd’s “Echoes” to Oldfield’s “Tubular Bells,” but let’s hope all they’ve got prepared for this show is a tuned guitar and a couple choice keys in which to build upon. —Damien McPherson