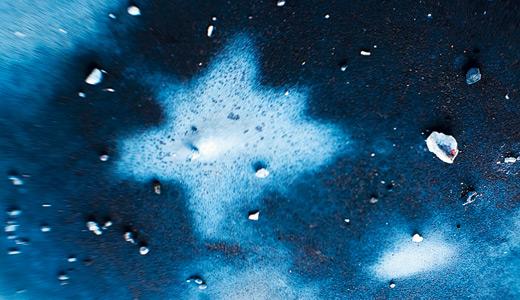 Even those barely plugged into the news have probably heard of the education gap persisting between black and white students in Louisville, and the disparate income level of the two races. This lecture promises to connect the dots to explain the nation’s prison pipeline for African-Americans, particularly men. Michelle Alexander is a civil rights lawyer, professor and author of “The New Jim Crow: Mass Incarceration in the Age of Colorblindness.” Alexander has appeared on MSNBC and a VH1 documentary to talk about this disturbing, decades-long trend. For their fifth annual lecture series, U of L’s Anne Braden Institute for Social Justice will feature Alexander. The event is free, open to the public and will no doubt enlighten. —Anne Marshall

Thursday sees the latest round of the inaugural Indiana University Southeast Interdisciplinary Colloquium Series, whose theme is “Climate Change: What are the Facts and What Should We Do?” Keith Mountain, the chair of the Geology and Geosciences Department at U of L, is giving a talk titled “What Does the Ice Core Record Tell Us?” Mountain is sort of like the Indiana Jones of climate science, as he has trekked to the ice-capped mountains of Antarctica, Greenland, China, Tibet, Africa and South America to collect glacier samples for research. During his visit to Indonesia last year, Mountain ran into some troubles when a local tribe felt that taking ice samples was akin to drilling into the skull of their god to steal their memories. No word yet on if he’s ever had to outrun a giant boulder and fight Nazis, though. —Joe Sonka

‘Hitchhiker’s Guide to the Galaxy’

Back in the dark days of the late 1970s, that clever Brit Douglas Adams wrote a witty sci-fi series called “The Hitchhiker’s Guide to the Galaxy” for the most futuristic medium of all — radio! A series of beloved novels and, eventually, a film adaptation followed, but the BBC original radio plays remain the native text for that “wholly remarkable” tourist guide to planets both harsh and ridiculous, like Earth. Follow the adventures of human Arthur Dent as he narrowly escapes the demolition of his home — indeed, the entire planet — with the help of travel writer and adventurer extraordinaire Ford Prefect, the mysterious Trillian, and one very paranoid android, Marvin. The Alley Theater has the actors, the script and the Moog to stage the first four episodes, but you’ll have to bring your own towel. —Erin Keane

When I was in high school, it would have been easier to recruit students to scoop up all of the dog shit in the city than to convince them to join the marching band — it was hard enough to keep all 32 of us who were already in the band from running off. Band seemed to be much more popular at other schools (where did they get those people?), but I would never want to start one from scratch. That’s what the protagonist in the newest play in Walden’s Slant Culture Series is determined to do, though. Think “Phantom of the Opera” meets “The Breakfast Club,” and you’re halfway there. Playwright Krista Knight’s piece illustrates an unlikely group of peers, including a mysterious exchange student, working together — sort of. —Jane Mattingly

The first-ever Flea off Market is geared to locals who love keeping it local — it’s like taking the best parts of area farmers markets and festivals and blending them together. With more than 40 vendors already on board, the market will feature artists, merchants, farmers and more for an afternoon of shopping, socializing and scouting great deals. There will be a wide range of goods and wares for “re-purpose,” including books, records, bicycles, antiques, vintage motor items, old junk, used tools and fine arts and crafts. And to keep the conversations and purchases flowing, there’ll be food trucks and seasonal beers and cocktails, of course. The plan is to have the Flea off Market every second Saturday of the month. So come check out this inaugural event and get some early Christmas shopping done. —Sara Havens

For the most part, dances are scripted movements to a particular type of music, such as the waltz, the tango and, yes, even the electric slide. Somewhere out there, a choreographer took the time to put movement to the music. The Moving Collective is a group true to its name, as the members summon the gods of dance to entertain. Choreographers from Kentucky, Ohio, Illinois and Virginia will grace the Ursuline Arts Center stage Saturday to dance the night away, focusing on professional modern dance. These ladies and gentlemen are sure to create a great deal of envy in those of us with two left feet. —Allison Ray

Tin Can Buddha’s members are familiar faces in Kentucky. The blues-based collective has been together for years, most visibly playing an all-star piano blues fest that aired on KET last year. They reconvene at the Bomhard for “a joyful NOISE” (capitalization theirs) with friends and special guests Zach Brock, Jonathan Ragonese, Gail Wynters and Ed McClanahan to perform a typically diverse set of blues, soul, jazz, folk, country and more. Mitch Ivanoff, Rodney Hatfield and Lee Carroll have each played visible roles in Kentucky’s blues, folk and country bands, from the Metropolitan All Stars to playing behind the Judds. Their appearances together are sporadic, as geography and economy don’t put them together in the same room all that often, making this a night not to miss. —Damien McPherson

The Sea and Cake

Saturday night’s all right for fighting, but it’s also all right for seeing smart bands who maintain a reliable sound while stretching out with each new release. The Sea and Cake, long a respected part of the whole Chicago post-rock scene (drummer John McEntire also plays in Tortoise), is playing Headliners Saturday as the last show on a short jaunt that started in Detroit (Rock City) and has been winding down the East Coast. Touring in support of their ninth record, The Moonlight Butterfly, The Sea and Cake may not be the most frenetic band on stage, but they faithfully recreate their breezy sound, described on their website as “delicate guitar interplay.” Yeah, sounds about right, but this time around the boys have branched out with more weird analog synthesizers and longer instrumental parts. Imaginary Cities and local singer-songwriter Ben Purdom open. —Doug Rapp

The once and future MC Phonte Coleman is still known to most as the Voltron’s-head of Little Brother. More recently, Coleman has been focusing on his singing chops via The Foreign Exchange, with producer Nicolay. Their first effort, Connected, served to bridge the hip-hop and R&B worlds. All that has followed have been full-on soul ventures. Authenticity is the most recent studio record. (A live CD/DVD, Dear Friends, came out this summer.) So many of the couplings sung about in today’s R&B are either porn or soap opera, but Phonte is a realist. The Foreign Exchange make soul music for people in real relationships. Love doesn’t have to mean flying around the world; sometimes it’s her bringing you a 12-piece to work, fried hard. In a world where “real” is more fiction than definition, The Foreign Exchange keep it, always. —Damien McPherson

U of L’s Floyd Theatre

The Floyd Theatre’s French Film Fest is always worth a coup d’oeil — and not just because each show is sans frais. Presented by U of L’s Languages Department and Student Activities Board, four of the five acclaimed selections from this year’s program will be Louisville premieres, including “Carlos,” an epic bio-pic about the 1970s celebrity-terrorist (Carlos the Jackal); Christophe Honoré’s complex family drama, “Making Plans for Lena”; and the Cannes Grand Prize winner, “Of Gods and Men.” Each film will run three times. The last showing of the Oscar-nominated “A Prophet” is Nov. 9, at 2:30 p.m. (“White Material” is the fifth in the series, and was screened last week.) All showings are in 35mm and brought to you in part by the Tournées Festival, a French organization that distributes le cinéma francais to American universities. —J. Christian Walsh

‘Americans Who Tell the Truth’

Reading a title like “Americans Who Tell the Truth,” it’s comforting to know that Robert Shetterly has painted a lot of people. I want to know there are many, many portraits of Americans who have told the truth. The Kentucky Center for African American Heritage, coupled with the ACLU of Kentucky, is displaying Shetterly’s series again in Louisville. The 30 portraits include several influential Kentuckians, such as Erik Reece, Muhammad Ali and Wendell Berry. National “truth tellers,” like César Chávez, round out the exhibition. Each portrait is accompanied by a quote from the sitter. KCAAH is hosting a Young Professionals cocktail reception benefiting the ACLU of Kentucky on Nov. 17. While the event is free, a donation is suggested. KCAAH is closed Nov. 15-16. —Jo Anne Triplett

The recent Photo Biennial brought the work of many national and international artists to town. It also reminded us about the quality of talent we have within our city limits. C.J. Pressma is one of the local greats, whose photographic talents have long fascinated and enlightened. Even if he’d done nothing else in his lifetime, Pressma would have earned accolades galore for founding the Center for Photographic Studies in Louisville in the 1970s. But he has done many other things. His latest exhibition, “Many Views — One Vision,” features a new body of work that continues to stretch the definition of photography. Pressma stopped shooting single photographs in the late 1990s, and began concentrating instead on large format collages, usually combined with textiles. Now he’s back to single images, manipulating light, focus and exposure to create abstractions. —Jo Anne Triplett