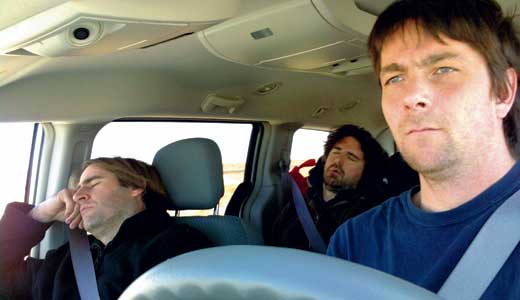 The story of Sebadoh has taken more twists and turns than a telenovela, though one lacking in obvious sex appeal or comical evil. The story began in the late ’80s in western Massachusetts, where then-ex-Dinosaur Jr. bassist Lou Barlow began collaborating on lo-fi homemade tapes with Eric Gaffney. Jason Loewenstein joined soon after, and the trio, fueled by their single “Gimme Indie Rock!,” influenced a generation of angry, confused but sensitive ex-punks.

Gaffney left early on, replaced first by Bob Fay and then by Louisville native Russ Pollard, whom Loewenstein had met while living in Louisville for more than a decade. Though the group’s last album was released in 1999, Barlow and Loewenstein have reunited at various times since, unfairly never achieving the mass popularity of peers Pavement or Guided by Voices.

Though the two men now live across the country from each other — Barlow in Los Angeles and Loewenstein in Brooklyn — and play with other groups (Barlow with Dinosaur Jr., Loewenstein with the Fiery Furnaces), the songwriters have begun working on new Sebadoh material again. For this tour, Fiery Furnaces drummer Bob D’Amico has joined the duo.

LEO: Bakesale was made around the time Jason was involved with (Louisville musician) Tara Jane O’Neil.

Lou Barlow: Yeah, he wrote a bunch of songs about her (laughs). She plays on the record. He’d recently moved to Louisville, actually. He loved Louisville, so he stayed there.

LEO: How do you feel the album holds up now?

LB: I didn’t think it would hold up; I guess, in my mind, I imagined that it wasn’t as good as people said it was … I’ve always liked the songs and the lyrics, I just didn’t think texturally or playing-wise it would really hold up, but when we were putting together the reissue, I finally had to listen to it. We lightly remastered it, beefed it up just a little bit, so I had to listen to it again, and I was kind of amazed that it sounded pretty good. It had a really cool feel to it, and the feel of it was pretty consistent … it was kind of a charming record — it’s not like a monster rock record by any stretch, but it’s pretty charming in its limitations, and also in its strengths.

LEO: Where do you think it falls in the Sebadoh catalog, for your tastes?

LB: I kind of think records like Bubble and Scrape and Sebadoh III and The Sebadoh, the last record we did, I think those are more powerful and scarier records. I like scary rock records, I guess (laughs), when it comes to rock bands. I like things to have a little bit of an edge to them, a menacing edge. I’m not really into the Pixies so much. I think there’s other Sebadoh records that have more of that edge (than Bakesale), to me they make them more interesting — but, having said that, listening to it, Bakesale is, track-by-track, definitely pretty consistent, and I really love Jason’s songs on it.

LB: Yeah … it’s OK. You know, that’s the spirit of Sebadoh. Bob Fay was the drummer in the band; true to our credo, our ethos or whatever, everybody had to have a song, and that’s Bob’s song. It could have been a lot worse (laughs), you know? It’s OK.

LEO: When Bakesale came out, it spoke to a lot of younger people who felt alienated and confused, like you. Now, you’re a family man.

LB: (laughs) Yeah … To be perfectly honest, I never saw it that the songs I wrote were — I got a lot of flack for being like, “These are so immature, navel-gazing, self-indulgent songs,” and I never bought that. I put a lot of effort into writing songs I thought would have longevity. I was in a really good spot as a songwriter, and the songs I wrote, they don’t embarrass me. They make sense to me. For all of the anger, or the confusion, of youth that might be in those songs, I also think that I could easily go through something as a 45-year-old man, and one of those songs, “Rebound,” could easily apply to somebody having romantic relationships in their 40s, I think. It’s not that difficult to translate it. To me, they’re just good songs, and in my opinion, they’ve stood the test of time. I’m able to play them, and I’m pretty to sensitive to that. If I’m playing a song and I don’t believe in it, or I’ve gone beyond it, I don’t play it, ’cause it feels weird. In general, these songs just don’t feel weird.

For an extended interview, go to bluecat.leoweekly.com.

Sebadoh with Mazes and Deer Meet