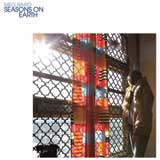 Although many will instantly recognize Meg Baird as the voice of the band Espers, Seasons on Earth marks her second solo release. Apart from the two cover songs wedged in the center of the album, the majority of Seasons on Earth contains Baird’s original work. This is the inverse of her 2007 release Dear Companion, which contained just two originals. With this departure, we are offered more of Baird’s own observations through her composition and songwriting, both of which show depth and imagination. Much of this album contains dreamy acoustic landscapes that are both rich and sparse at the same time; however, on occasion, Baird gets assistance from Marc Orleans, adding in speckles of pedal steel. While Seasons on Earth pays attention to folk tradition, the album manages to rise above cliché and stagnation. The closer “Song for Next Summer” demonstrates Baird’s ability to have a foot in both worlds. Listeners should expect all they love in a singer-songwriter album, but married to modern style innovation and production.