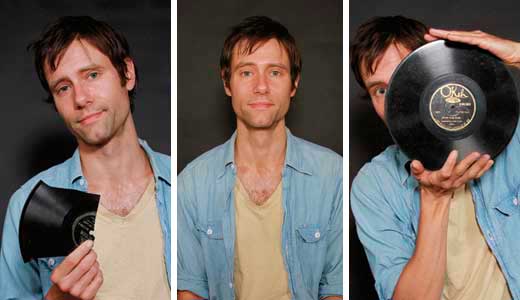 The middle of the past century experienced a peculiar phenomenon that came to be known as the Urban Folk Revival. It played a fundamental role in shaping American popular culture, from Eisenhower through the Vietnam War. Its influence was on the wane until a resurgence in the mid-1990s, which was arguably inspired by the reissue of Harry Smith’s landmark Anthology of American Folk Music, a deeply wonderful, important and idiosyncratic compilation that played no small part in launching the original revival.

The new revival — really a re-revival — is more vigorous today than at any time in the past, with piles of great, previously unheard or under-heard vintage recordings crawling out, and with some stellar players who have listened hard to the old masters, learned their tunes, and successfully synthesized old-time country, blues, ragtime and hot jazz repertoires with contemporary sensibilities. Eli Smith is one of the leading lights of the re-revival, and is the leader of the NYC-based Dust Busters string band, easily some of the most gifted young players on the scene today. Their new record, The Old Man Below, is due out early next year on the venerable Folkways label. The Dust Busters play Gerstle’s Place on Nov. 17.

LEO: What’s with the current taste for old-time music and its distribution and influence far outside the “traditional” scene?

Eli Smith: Folk music has always come to the fore in times of war and economic and political crisis — in the WWII-era, in the 1960s, and again now. People are alienated. And the more alienated, industrialized and homogenized we all get, the more many of us want something that’s local, individual and just understandable. You can look at a banjo and you can see immediately how it works; you can even build your own if you wanted to and it wouldn’t be that hard. Plus, it sounds great! This sort of minimalism allows you to get your head together in a world that’s bewildering, and experience something that’s authentic and grounded.

LEO: What are the boundaries of your repertoire?

ES: Our taste extends to all time periods, styles of music and regions of the world. We play and arrange tunes learned from American commercial recordings released on 78s mostly before WWII, as well as from field recordings from the 1930s through the ’90s, and also material learned firsthand from our peers and our elders. We’re also interested in post-war country music and are beginning to write our own material.

LEO: Explain your ongoing collaboration with John Cohen, one of the major figures in the 1960s folk revival.

ES: John has been our friend and collaborator since the beginning of the band. We met him through our mutual friend Peter Stampfel, of the Holy Modal Rounders and the Fugs. John, now in his late 70s, has been our mentor and the main “elder” from whom we have learned material, but he’s never been a task master, only a guide and a fellow lover of the music. He is among the most knowledgeable and creative interpreters of old-time music in the modern era, and working with him has been a blessing. And with his personal connections to Roscoe Holcomb, Dock Boggs and Maybelle Carter, among others, his stories and knowledge run deep.

LEO: What does it mean to you to be releasing a record on Folkways?

ES: Folkways was one of those archetypal labels from the past whose albums I collected from used record stores. It has always been the alpha and omega of independent folk labels — it was the first, and now it’s the last. Elektra, Vanguard and the like are gone and, with the industry nearly dead, no other labels have arisen to take their place. There are a few folk labels that mainly do reissues, and a lot of others that don’t release things that I recognize as folk music, so it’s lucky indeed to be able to release an album on Folkways. It’s phenomenal that they remain a vibrant organization and are interested in a young band like us. When people unfamiliar with them ask me what other bands are on the label, I am pleased to reply, “Leadbelly.”