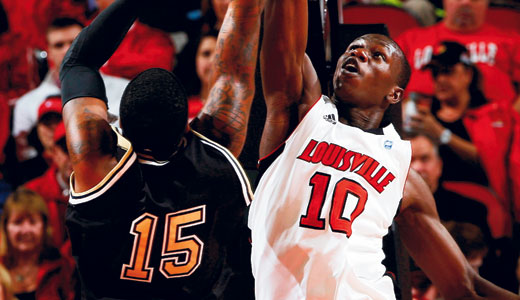 It’s not just that Gorgui Dieng is 6-feet-10 inches tall. And fast. And smart.

“It’s his hands,” says former University of Louisville center Mike Grosso, extending his own pair of large-size mitts to display a scoring center’s most important tools of the trade.

“He’s got these soft hands that make for a soft shooting touch,” Grosso explains. “Even when he misses — the ball doesn’t clank off the rim. It hits in the rim softly, and when it bounces up just kisses the board and drops through.”

Dieng, a 21-year-old sophomore from the West African nation of Senegal, could be a keystone piece of the Louisville basketball puzzle in 2011-12. Though he averaged just six points as a freshman, Dieng connected on 62 percent of his shots, while swatting away 56 of his opponents’ attempts. If all goes well, Dieng will be Louisville’s man in the middle — not just by position, but by experience, as well — connecting a raft of skilled veterans with a crop of promising freshmen. And a player possibly poised on the edge of stardom, himself.

“He’s the best center we’ve had here in years,” says U of L Hall-of-Famer Grosso (1968-70), who followed Westly Unseld in the pivot, and preceded Pervis Ellison.

But Grosso doesn’t compare Dieng with U of L centers of the past. Dieng, he says, is a big man of the present. “Gorgui’s like the centers they’ve had at Georgetown and Connecticut — running the court, blocking shots, getting better every year they play.”

Dieng also has an uncanny ability to do something with the ball in an instant. Taking a pass from a teammate, it seems to take him less than a fraction of a second to shoot. There’s no … catch it, come set, make a move, then shoot. While all that is going on with other centers, Dieng’s shot is gone.

Feel the ball before you catch it?

“Yeah,” Dieng adds. “Like the coach has told me, you have to be ready all the time. Any time a defender moves his head, you should be ready to go to the basket. You can’t just put your hands down, and when you catch the ball try to do something. I have to be ready before the ball gets to me, so as soon as I touch it the ball is going to tell me what to do.”

Pretty slick. And maybe a trick borrowed from the West Africa soccer whizzes who star on top European teams. Making clever plays on the run.

“I know if I pass him the ball, he’s going to catch it,” Siva says. And sure-handed catches mean Siva and Dieng can work the “pick and roll” or “drive and dish” — to put it in basketball vernacular.

Working plays is Siva’s job. The junior from Seattle has a national profile and a chance at professional basketball. But he knows his prospects for the future hinge on helping Louisville succeed today.

“I’m going to go as far as my teammates go,” Siva says. “If they’re knocking down shots, I’m going to look good. If they’re not knocking down shots, I’m not going to look good. Like somebody who’s not even out there. I want to make smart plays. That’s the thing I’m focused on now: not create a lot of turnovers for myself and concentrate on my play with teammates.”

Siva and Dieng have a full crew of ready roll players with whom to interact: Kyle Kuric and Chris Smith will start, along with freshman power forward Chane Behanan. Coach Rick Pitino will weave in Mike Marra, Elisha Justice, Rakeem Buckles (who is completing recovery from knee surgery), Jared Swopshire and Russ Smith. Stephan Van Treese and freshman Zach Price step in near the basket.

Pitino sees this team as similar to last year’s Cardinals, who won 25 games and ranked in the Top 25 most of the season.

“What we have to fight more than anything else is the schedule,” Pitino says. “We have to be ready early, playing some outstanding teams. It’s not only that the teams are ranked, but they’re teams with a lot of experience. Like Long Beach State. Like Vanderbilt. They have a lot back. When you play Kentucky on the road, Butler on the road, Memphis and Long Beach State and Vanderbilt — and Western Kentucky — you have to be ready early on.”

But Pitino, now in his 11th season at Louisville, and 26th overall, doesn’t appear worried. In fact, he seems happy.

“These last two years, we’ve had a team with a ‘throwback’ attitude,” the coach says. “Not throwback players. But players who play with a throwback attitude. You don’t see this very much, what we have. It’s unusual, not typical. I haven’t had this type of group since ’87 Providence.”

The 1987 Providence Friars, are, of course, one of Pitino’s most famous surprises, coming from obscurity to lead the nation in three-point shooting in the first year of the three, and advancing to the Final Four.

If Louisville is to make the big leap from Top 25 to Top 10, it will need big contributions from its freshmen.

Chane Behanan, a Cincinnati native who played at Bowling Green (Ky.) High, steps right into the fray, ready to play.

“I want to get to the right place on the court,” says Behanan, who uses all 94 feet of it. “Great players get the ball in great places.”

Which helps in rebounding, too.

“That’s what Coach Pitino would like,” Behanan says with a smile. “Zero points and 80 rebounds a game. That’s what he’d like me to average.”

But 15 and 10 would be perfect — giving Siva more options, taking the double-team off Dieng, and maybe leaving Kuric open more often from “Kyle’s Korner.”

Price, another Ohio native, who played at Jeffersontown, has a solid 6-10 frame to cope with the big oaks of the Big East forest.

At a tip-off luncheon, Pitino told fans that Nunez wasn’t at the event because, “He’s at the doctor, getting his anti-defense vaccine.” With the ball, Nunez is easily stopped by conventional college defenses.

Yet, Nunez is a striking-looking athlete, guitar-string long and thin (he wears the No. 1). A sleek 6-6, with basketball hands. Give him a year or so.

Wayne Blackshear, who averaged 32 points a game in high school in Chicago, has had a difficult time just getting on the court. He had surgery for an injured shoulder at the end of last season. Then, just as he came back, he injured his other shoulder and won’t play until later in the season. But for fans who’ve yearned for years for a guy who can get 30 when he wants it, the wait might be worth it. Beyond scoring, Pitino calls the 6-6 Blackshear a terrific passer, rebounder and “lock-down defender.”

“The Chicago player has a reputation for playing hard,” Blackshear says. “Something about us, we don’t back down to anybody. We’ve been taught to play hard.”

But all that scoring? A reporter wishes to know how he did it.

“In high school, I focused on the mid-range game,” Blackshear explains. “A lot of guys want to shoot the threes, but I like mid-range.”