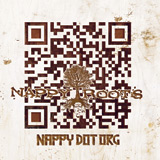 Almost 10 years after their national debut brought comparisons to the Dungeon Family collective (which includes OutKast), Nappy Roots have linked up with OutKast’s original producers, Organized Noize, for a much-anticipated collaboration. Nappy Dot Org isn’t the cookie-cutter album it could have been, a simple blend of the camps’ styles, though it isn’t the tour de force fans of both crews were looking forward to. “Pete Rose” is the centerpiece of the album, a somewhat rare political turn for the group, featuring Goodie Mob’s Khujo. “Give Me a Sign” is the requisite Nappy Roots-sounding song, the guitar-led midtempo that could fit on any of their records. The album is solid, with no real skippers, and only the two skate songs (“Easy Money” and “Y’all Party”) are a little questionable, presumably intended for the European market. I am confused as to why the album is called Nappy Dot Org when they don’t own that domain, but who am I to question their marketing plan? A satisfying excursion, though one wonders what this pairing would have made in 2003.