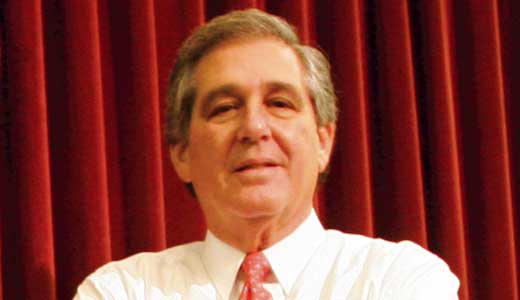 Like him or not, former Louisville Mayor Jerry Abramson is a master salesman. And for 20 years, he’s shilled our city, then our Metro (the 17th largest in the United States!) with genuine gusto.

Some think Gov. Steve Beshear chose Abramson as a running mate largely due to his daft cheerleading skills. If Republican David Williams had posed a challenge, Beshear could’ve tapped his sidekick’s pizzazz.

“Abramson could’ve filled the role as face of the campaign if things had gotten tight and given that energy that Beshear cannot,” says Steve Voss, a University of Kentucky political science professor.

But Williams hasn’t put Beshear’s second term at risk, so the duo has stayed comfortably mum.

“The lieutenant governor has not played a major role in anything in Kentucky,” he chuckled, adding, “I’m not ready to retire.”

Voss says Abramson’s actually an ideal candidate for the job.

“In a lot of states, the lieutenant governor is supposed to be the state cheerleader,” he says. “They don’t make them get pom poms, but often their job is to recruit business and tourism.”

Abramson’s been vocal about wanting to work on economic development initiatives in Frankfort. Danny Briscoe, a political consultant based in Louisville and a friend of Abramson, believes the former mayor will be selected as secretary for the state’s Cabinet for Economic Development.

“He’s recruited all kinds of businesses for 20 years,” Briscoe says. “He’s done that for Louisville and Jefferson County, which is about a fifth of the state, and it would just become a bigger universe for him.”

Mike Ward, a former U.S. congressman for Louisville, met Abramson 30 years ago. The two worked together on numerous projects including the airport expansion for UPS’s Worldport.

Critics of Abramson wonder whether that eagerness will work in this day and age. Metro Councilman Kelly Downard, a Republican who ran against Abramson in the 2006 mayoral race, says he approves of Abramson as a leader but not as a manager of public money.

“He only knows one way to do economic development and that is to give things away,” he says.

Downard is referring to the hundreds of millions in taxpayer dollars Abramson pledged to the Cordish Cos., developers of Fourth Street Live, as well as the new downtown arena.

In a recent televised debate on KET, Abramson acknowledged that in the old days, “back in ’86,” businesses were just looking for money, but not anymore. Now, they want quality of life — safe neighborhoods, good schools.

Never mind the fact that education is an entirely separate entity not run by the state’s executive branch. But Briscoe says Abramson doesn’t need to devise education policy — he can be its cheerleader.

“You can promote education as the best thing we can do to get people to Kentucky,” he says, adding that Abramson will have his work cut out for him. Being a booster for Louisville is a lot easier than advocating for a rural state with one of the nation’s highest poverty rates.

Scott Lasley, a political science professor at Western Kentucky University, says in his region voters view Abramson as a “Louisville guy.” As far as economic development is concerned, he thinks business owners are tired of competing with a right to work state — Tennessee — just 20 miles away. Also, he says, voters want to see the tax code revamped.

When it comes to these nitty-gritty policy details, like tax reform and mountaintop removal mining, Abramson has loyally rallied for all things Beshear, as one would expect on the campaign trail.

Voss looks forward to monitoring this political marriage. The two men met in the 1980s when Abramson was general counsel for then-Gov. John Y. Brown and Beshear was attorney general.

The last few couplings in the state capitol have had sour endings. Lt. Gov. Steve Pence resigned from the Fletcher administration. And lest we forget the alleged audiotapes of outgoing lieutenant Daniel Mongiardo saying he had “zero loyalties” to Beshear.

Voss says Abramson’s large personality, and disdain for being in the background, could prove threatening to Beshear.

“If I were governor, I would be planning what to give him, what tasks to give him,” he says, “before he starts looking for himself.”

And what about the rumor that Beshear will run against Republican Sen. Mitch McConnell, allowing Abramson to rise to the role of governor? Beshear has stated that’s not going to happen. Briscoe doesn’t buy it either. The professor believes the two old friends in their 60s are headed to Frankfort in the twilight of their careers, Beshear at the forefront, Abramson with the fist pump.