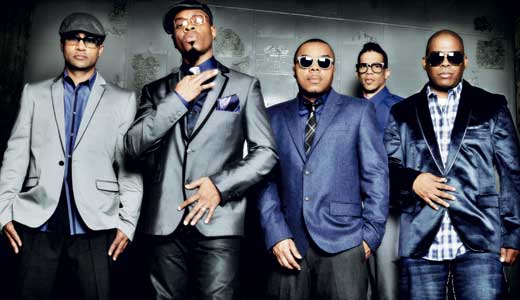 Today The Roots are seen as an oddity for being a live band, but until recently, everybody played their own instruments. Though pop and R&B has changed dramatically in the past 20-some years, Mint Condition have stayed true to their talent and ideals. Their latest album is called 7. LEO spoke with bassist Ricky Kinchen.

LEO: You guys are celebrating your 20th anniversary, approximately. How does it feel, being 20 years in?

Ricky Kinchen: It feels great. A lot of great things have been happening — touring, some TV shows. It all started with this TV show we did called “Way Black When,” where they celebrated the ’70s, ’80s and ’90s. Every artist that played, we backed up. So our résumé grew within four weeks to, like, The Emotions, BBD, Ginuine, Guy, Cuba Gooding Sr. — he was amazing, I’ll never forget him. I know he wore them kids out, because he wore us out.

Then Prince called, so we did some shows over in Europe. The first show was, like, 35,000. The second show was 60,000. Some festivals … Then we toured with Jill Scott, Anthony Hamilton, DJ Jazzy Jeff and Doug E. Fresh. Then, next month we start rehearsing for the Trumpet Awards, where we’re going to be doing a tribute to Earth, Wind and Fire.

So, everything is good. I’m ready for the next project. We still got that magic whenever we come together, and it’s going to be interesting every time.

LEO: What can we expect from the live show? Sharp suits? Any other visuals onstage?

RK: I don’t think we’re going to be wearing suits or anything like that (laughs). We always looking young and looking fly. For us to be in our 30s and 40s — let’s just say 30s (laughs) — we still look halfway decent. So yeah, the ladies are definitely going to be coming out.

LEO: I’m about your age, so can you give me some advice on how to keep it fresh?

RK: Two of the guys who look the youngest, they work out, they drink a lot of water. The lead singer probably looks the youngest; he doesn’t club a lot, I don’t think he does a lot of drinking. So, if you drink, I’d say tone it down to some wine, some beer maybe (laughs). The strong stuff is definitely going to age you.

LEO: Are you seeing a range of age groups at your shows now?

RK: Oh yeah, definitely, definitely. The reason they come is they know what they’re going to get. They know every time they come to see us, they’re going to get a live performance. It’ll be people up there sweatin’, playing drums — you know you’re not going to get a track show. That’s the one thing about a lot of the younger artists right now — they’re killing their careers. Once all the shiny jackets and glitter and sunglasses are gone, and the record deals are gone, the only thing they’re going to have left is to do shows. But they don’t know how to do shows, and all the information is out there for them to learn — but they’re not being taught.

LEO: Is this the best period for the band?

RK: It’s all great. It’s all different. I might appreciate things more now than I did back then.