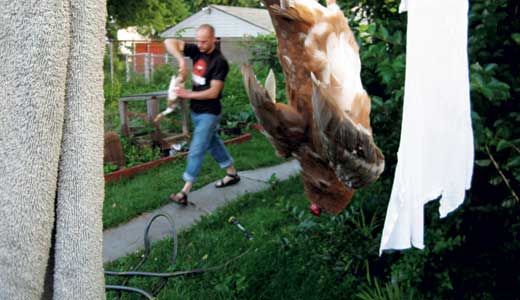 In a time when frozen pizza has achieved congressionally approved veggie status, Joseph Franzen is waging a strategic, uphill campaign against “food illiteracy” from his classroom at Fern Creek High School. Along with fellow teacher Brent Peters, Franzen has created a pilot program called The Food Literacy Project — a type of hybrid course that merges English with the culinary arts. This is in addition to an after-school Cooking Club that prepared a home-grown, fresh-kill turkey dinner during a recent visit from LEO, as well as campus gardens, orchards and grape vines that will soon be large enough to support summer jobs at a nearby greenmarket.

During a recent “breakfast edition” of Cooking Club, Franzen learned just how necessary these services are, when 13 of his 30+ sous chefs revealed that they could not recall the last time they had a homecooked meal that did not include fast, frozen or microwaveable food. I had the chance to meet some of these students while trying to keep up with Franzen, as he and Peters worked to stir young minds and appetites in the waning school days before Thanksgiving.

After a slideshow presentation on morality and fast food advertising, Franzen asked which of his students would be eating turkey on Thursday. The 99 percent who indicated “yes” were told to keep their hands up if they knew where their birds were coming from. “Kroger’s,” someone drolly volunteered, prompting Franzen to clarify — he meant which farm and how far away it was. All but five hands dropped; not a grand number of informed turkey eaters, but not a bad one either if, like Franzen, you are a proponent of locavorism who’s looking for signs of progress.

A more encouraging figure is certainly the two students who completed the teacher’s hands-on course in turkey slaughtering just days prior. That exercise was not sanctioned by Fern Creek and was held privately on Franzen’s small but active backyard farm in Germantown. The students who arrived for the 7 a.m. roll call included Chad Murphy and Katelyn Ong, two seniors who seem to represent the convergently rural and urban natures of the student population here, as well as the locavore movement itself.

Murphy, whose roots stretch deep into Eastern Kentucky, had just scored a six-point buck and revealed that he has hunted since childhood for, in his words, “anything that walks, crawls or flies.” For her part, Ong has dabbled in vegetarianism, volunteered to help build community gardens and is considering an environmental studies major next year. The pair form an interesting duo, one that highlights a current cross-section between the modern, cerebral approach to local food and a naturally occurring one that has been passed through families for generations.

Stopped during those manic, precious minutes between classes, Ong described that morning at Franzen’s, saying it elevated her appreciation of food and the animal’s sacrifice, adding that the event wasn’t nearly as freaky as she expected it to be. “We did it in the most civil kind of way. We just slit the jugular and let it bleed out. Then we chopped its head off and soaked it in water to help the feathers come off when we plucked it. It wasn’t like I thought it was going to be. It wasn’t that graphic,” said the soft-spoken 17-year-old.

Murphy and Ong make this all sound like a snap, but having sat in on one of these courses, slaughtering and dressing a bird isn’t as easy for everyone. (Before meeting Franzen, I had never killed anything that didn’t perish under the weight of a flyswatter —and still haven’t.) Observing these various tutorials, it became clear that gaining food literacy is akin to learning any new language — much easier if you get them young — a theory that Franzen confirms.

For Ong, the turkey slaughter was something of an intellectual curiosity, one not shared by her parents. Mom often questions the logic of her daughter’s preference for pesticide-free produce and isn’t entirely trusting of the organic thing. A kid’s culture at home can be one of the many difficulties facing Franzen in his efforts to shorten the food chain. This can be a challenge as powerful as the school lunch lobby or as engrained as child-targeted fast food branding efforts, like “The Wacky Adventures of Ronald McDonald,” a cartoon Franzen briefly screened during his advertising lecture.

For every Murphy and Ong, there are a dozen classmates who represent a more mainstream swath of Louisville teenager. Asked about those who defended McDonald’s right to market itself during his last class, Franzen noted one student who eats fast food with his mother and younger brother every night of the week. These meals have imprinted themselves on the young man’s personality in such a way that he takes offense if he feels you’re bashing the places his family gets nourishment — and why shouldn’t he? There is indeed a fine line between lecturing on proper diet and judging one’s lifestyle choices.

“I’m not out to get kids to swear off fast food or anything like that, but to become a critical thinker about everything you put into your body,” Franzen said as we made our way through the buzzing, congested hallways to Cooking Club. Upon arrival, Franzen began handing out assignments. “You’re the Biscuit Lady. You’re the Gravy Man. Where are my Mashed Potato People?”

Peters, a former employee at the Mayan Café who still makes a pretty mean guac, hurried in soon after, stringing on an apron. Christine Brinkmann, a volunteer who helps spread the local/seasonal gospel and assist in the club’s catering operations, joined Peters.

“It’s mind-blowing to watch these kids learn,” said Brinkmann, a mother of two who also works for the publication Edible Louisville. “They’re having fun, and that’s half the battle. They don’t always understand when they are learning something.”

Other students arrive to this after-school program simply because they are hungry, a sobering fact that Brinkmann doesn’t let phase her. Hunger is, after all, the best reason to learn how to cook.