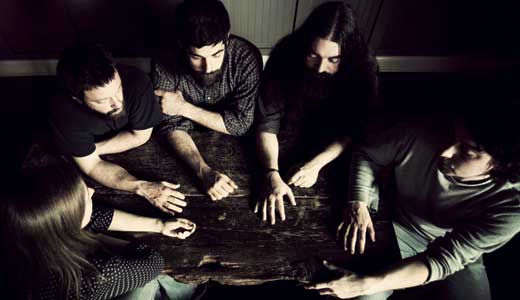 When WFPK DJ Matt Anthony called King’s Daughters & Sons a Louisville music version of the comic book “Justice League,” he got it right. To call the band a “supergroup” would also be fair, though their combined fame as members of Rachel’s, Shipping News and other bands is notably less than that of the Traveling Wilburys or Chickenfoot.

The new band began with singer-songwriter Joe Manning, a popular local fixture and LEO columnist. Manning wanted to expand his music beyond what the solo format allowed, and to incorporate more surprising influences — the subtle beauty of the Louisville-bred The For Carnation, the gothic pleasures of Nick Cave, as well as the ultimate solo record, Bruce Springsteen’s Nebraska.

Manning and guitarist/singer Mike Heineman, writing together, wanted to explore fictional narratives — worlds of ghosts, sirens, murder ballads and other themes not found easily in rock music today. What they found was a style that combined the literary and musical traditions of the American South and the British Isles.

Manning also wanted some of their favorite musicians to join them.

“Oh, did you?” says Manning, surprised, as they laugh.

“I think I said I’d think about it, and took two or three months.”

Heineman clarifies, “I think it was a year of just dudes” before Grimes’ love for the songs overtook her reluctance to join another band.

“We’re so excited to finally have this record coming out,” Grimes says. The title of the Nov. 22 release, If Then Not When, came from a scrambled line she had uttered in comical frustration about the four year-plus haul from their first show to their first album.

“It had been on my mind for a long time, and it’s worked out pretty much exactly how I envisioned it,” Manning says.

It was Grimes’ career path that led them to an unexpected home on a Scottish label. On a solo European tour last year, the pianist met Alun Woodward, former leader of the band The Delgados and co-founder of the influential indie label Chemikal Underground. After he sent her some of their records, she sent him her band’s album.

“At the very last moment, right when we were getting ready to self-release it, we finally set ourselves a date,” explains Manning. “We said, ‘In 30 days, we’re going to decide what we’re going to do with the record,’ and in that 30 days, (Chemikal Underground) said, ‘Yes, we’d love to put your record out!’”

The more traveled members have seen enough of the music business to keep their expectations low. Grimes, bassist Todd Cook and drummer Kyle Crabtree were all personally affected by the 2009 closure of their longtime mutual label home, Chicago’s Touch and Go Records, which occurred shortly after King’s Daughters & Sons recording sessions had begun with producer Kevin Ratterman.

Despite all the obvious problems within their industry, the group members have fans scattered all over, from Louisville to Tokyo. So why did it take so long to get to this point? In the end, probably because what distinguishes them from most new bands — their relative maturity and civility — stopped them from doing anything too rock ’n’ roll cliché.

“This has always been a 100-percent democratic group,” Manning says. “Which means it’s taken a long time to do things.”

Neither the band nor their label are concerned with launching long tours, or acting as though the business of music is currently financially rewarding. The members, who have all seen each other grow up in Louisville bands since the ’90s, have plenty of new songs in progress and are having fun playing together. Still, Manning can already appreciate what they have achieved together.