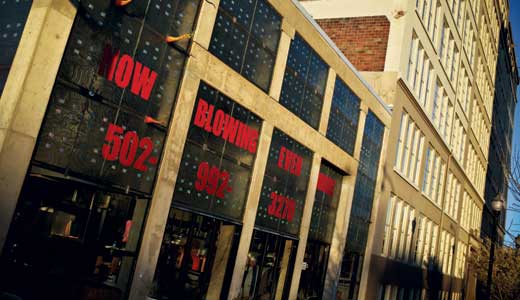 On a recent Friday afternoon, the kilns in the Glassworks gallery “hot shop” rage, each one a boxed-up volcano. Artists dip into a pool of 2,100-degree molten glass as visitors stand nearby, ready to blow on long steel pipes in an effort to exhale the perfect bulbous creation.

A few filter into the nearby gallery, checking out shelves of colorful vases, bowls, ornaments and jewelry. For years, the first floor of the Glassworks building has welcomed herds of holiday customers. And from the public’s perspective, it may be unnoticeable that this popular place is cresting a time of upheaval and hardship.

A few months ago, the fate of the Glassworks gallery and its hands-on workshops looked grim. Years of financial struggles had taken its toll.

In May, owner Ken vonRoenn and his daughter Page vonRoenn were on the brink of having to close the business. Instead, they opted to turn the operation over to their landlord, allowing Glassworks to remain open.

It wasn’t until after that difficult decision was made that the vonRoenns realized their financial difficulties did not stem from a sour economy or the challenging business of art retail, but rather their trust in one woman.

It was in the position of CFO that, according to court documents, she stole nearly $600,000 over six years. Page vonRoenn, former vice president of Glassworks, says large amounts of cash made at the gallery and workshops were never deposited. Court documents also allege Riedling put her husband on Glassworks’ weekly payroll, even though he only did work for the company a handful of times.

In hindsight, employees say there were red flags, but suspicion and distrust weren’t built into the company’s culture, so warnings were left unheeded.

Architectural Glass Art Inc., formerly Louisville Art Glass, has been a family-owned company since 1875. Ken vonRoenn bought it in 1991, and under his guidance, AGA has produced eye-catching windows and glass pieces, including the ornate sculpture hanging over the atrium of Jewish Hospital East.

In 2001, vonRoenn moved his company from the Highlands to what’s come to be known as the Glassworks building on West Market Street. City Properties Group owns the building, which also houses condos. Upon moving, AGA decided to venture out and start a gallery that would feature the work of local glass artists, as well as glass-blowing workshops.

In 2005, Latrisha Riedling came on board as bookeeper, eventually moving up to CFO. She had total control of finances, from reimbursement checks to deposits to payroll.

Sherry Daws started her job at the gallery in 2007, eventually becoming its director. Daws and three other former employees describe the atmosphere as tight-knit, with everyone eager to see the unique space succeed. Even at its busiest time of year, the gallery and workshops only had about a dozen full-time and part-time employees.

“We all genuinely believed in what we were doing,” Daws says. “Glassworks was a family.”

Despite climbing sales, Daws says that Riedling frequently told her there was no money to spend on new merchandise.

“I was told, ‘Oh no, we can’t afford to buy stock, but you have to make more money,’” she recalls. “Well, you can’t really sell stuff if you can’t buy it to have for sale.”

“One month profits went up 38 percent,” she says. Still, she was told money for supplies was minimal. Both Daws and Sobiech say they operated on a shoestring budget for years.

The company tightened its belt, cutting back employee hours.

Then last spring, things took a turn for the worse.

Local artists and other vendors weren’t being paid for sold artwork. (Glassworks never paid LEO for three months worth of advertising between March and May.)

Rumors swirled among employees that the first-floor gallery would close.

In May, Ken vonRoenn — who says he used $2 million in Architectural Glass Art Inc. money and personal funds to plug Glassworks’ losses — finally decided he couldn’t do it anymore.

“We held on longer than we probably should have, primarily because we did have such a good team, and we wanted to keep everyone employed,” vonRoenn says. “We kept thinking if we could turn things around and get it to where things are stable and breaking even then it would be okay.”

But the transition wasn’t seamless.

Because the company was dissolving, technically the vonRoenns had to lay employees off, with the understanding that City Properties would hire them back.

As promised, offers were made to about a dozen full and part-time workers within a few days, but most, like Bidwell, didn’t return because the gallery’s future seemed too unstable. Former employees also tell LEO that the pay being offered was significantly lower, although City Properties refutes that claim.

“I, at that point, was not interested in going back to a messy situation,” Bidwell says.

It wasn’t until June that Page vonRoenn says her family finally pieced together the gallery’s financial spiral. While restructuring finances with their bank, she says her father noticed discrepancies on payroll records, with large amounts being siphoned out of the company and allegedly into Riedling’s personal coffers.

“It was a shock,” she says, adding that Riedling had become a personal, trusted friend.

“In hindsight, it’s like, what the hell were we thinking?” she says. “We were way too trusting.”

Before Riedling was hired, vonRoenn says she completed a background check, but nothing came up. Charges against Riedling for theft by use of cold checks were dismissed in 2002. Neither Riedling nor her lawyer returned LEO’s calls seeking comment for this story.

“It was kind of a relief to know it wasn’t us who weren’t doing our jobs,” Bidwell says.

But as gallery director, Daws regrets not questioning why so much of the gallery’s profits were disappearing.

“I carry a burden of responsibility,” she says.

As for Glassworks’ future, Weyland says new management is in place and they look forward to a strong holiday season.

Ken vonRoenn is now focused on Architectural Glass Art Inc. While that side of the company took a financial hit, he says it’s still strong. AGA plans on moving from the Glassworks building to a larger space in 2012.